Ranking The Top 13 Hurling Points Ever Caught On Camera

We've seen plenty of rankings of the best goals ever scored in hurling. But what about points? There's more of them than ever these days, and they come from all angles and distances. But sometimes, even now, a point can be simply breathtaking.

We've had a go at the best 13 we can find. But it's all subjective. With tens of thousands to choose from, you're bound to have a different opinion. Please let us know.

It's the last minute of injury time in an All-Ireland semi-final and the scores are level. Brendan Maher got the ball in the corner after a clash left his hurley without most of its bás. The score was indicative of a legendary campaign for Borris-Ileigh, led by the inspirational Maher.

Ger Loughnane enjoyed this. He introduced it on the Sunday Game evening show by referring to the glory of hurling. Podge, he said, wasn't able to hit the ball off his right side at school. Loughnane was the headmaster at Podge's primary.

That surreal day when 30 minutes into the Leinster hurling final, the scoreline read Galway 2-11  Kilkenny 0-1. Future All-Ireland winning captain David Burke, then deployed at wing forward, had a super year in 2012.

Early in the second half of the game, with Kilkenny on the rampage, he reacted beautifully to turn this blocked shot for a goal into the point of the year.

Tipp had just missed two nailed on goal chances to effectively put the 2016 All-Ireland final to bed but when Kilkenny heaved the ball clear, Paudie Maher ensured Tipp weren't going to come away from the attack with nothing. Plucks the ball over everybody's head, carries it the sideline and hits a monster of a point. There was no way back for Cats after this.

The 2018 All-Ireland semi-final between Clare and Galway was a mad affair. Galway took what seemed like an unassailable lead only to Clare to claw back the deficit and the game ended with a thrilling trading of scores for the last 10 minutes, with a final second Clare equaliser reminiscent of their last ditch points in the All-Ireland final five years earlier. The replay followed much the same pattern, and a Clare goal chance that hit the post late on scuppered their chances with Galway just about reaching the final.

Most of all though, the epic tie between the counties will be remembered for the Peter Duggan's 64th minute point, one of the best ever seen in Croke Park. With the whole of Galway surrounding him, and having been knocked off balance, we're still not sure how he maneuvered the ball over the bar.

In the early days of the Brian Cody era, DJ killed all talk of him under-performing in All-Ireland finals. He laid on two magnificent displays as Kilkenny smashed Offaly in 2000 and comfortably dispatched Clare in the 2002 final.

"Sheer genius from the master craftsman."

The point off his knees in the Munster championship. Brian Corcoran's first championship match back since coming out of retirement. He was in his new guise as a forward.

He said on Laochra Gael he didn't come out of retirement for the love of the game, he came back to win an All-Ireland. He won two.

A forgettable enough game and John Leahy's last ever championship game for Tipp. Injury sadly ruled him out of much of the 2001 campaign when Tipp would go on to win the All-Ireland.

They were beaten by two points by Galway in the 2000 quarter-final. In an even first half, Leahy lit up the game with this gorgeously skillful point. The score has been underrated at tad by posterity, in our view.

"If that doesn't lift Cork, nothing will. He came through like a JCB!"

Unforgettable score and about the only thing that game is known for. Limerick actually won the 2001 Munster first round game by a point, dumping Cork out of the championship. This was the last year it was possible to lose in Munster and exit the championship.

Probably the most famous point ever scored, TG4 stuck this at No.1 in their ranking of the finest points ever scored, possibly accounting for the phenomenal importance of the score.

Late in injury-time, with Limerick all square with the All-Ireland champions. Ger Canning's frenzied commentary has definitely helped cement its status as a moment.

"Carey leading the charge of the light brigade..."

Ger came into his own there. The most romantic of scores.

A contender to rival Carey's point for the most famous of all-time. Galway and Tipperary's incredible trilogy of All-Ireland semi-finals came to a close with one of the great scores of all time.

Joe Canning will go down as one of the greatest to ever play the game, and it will be this moment that we go to first when we look back on his glittering career.

Cyril Farrell, normally scrupulously fair and neutral in his calling of Galway games, possibly betrayed himself here. Rarely has a co-commentator sounded so genuinely excited and enthralled. But could anyone blame him?

This was the game Brian Cody never forgot. Galway bullied Kilkenny from even before the throw-in when teenager Richie Murray landed Brian McEvoy on his backside as they readied themselves for the off.

While Galway outmuscled Kilkenny, they also had the finesse to make it count. The dazzling Kevin Broderick provided that.

It's hard to remember another point liked it. Magnificent and unforgettable. When Quigley retired a number of years ago, the point was the first thing brought up.

Wexford had won the Leinster final the year before and they started quickly in '05 before Kilkenny reeled them in and won by three.

In American Football, it would probably be given a nickname like 'The Point'. 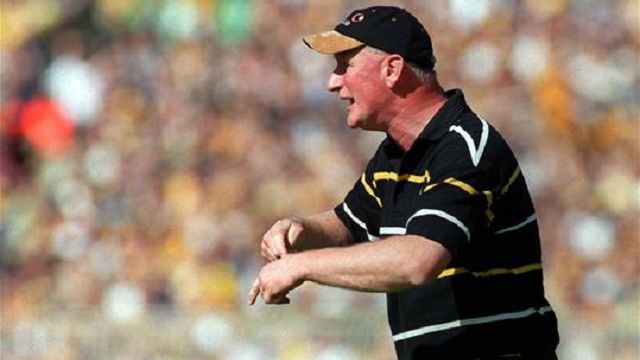