Reigning All-Ireland champions Tipperary are out of the 2020 championship after a dramatic two-point loss to Galway in Limerick this afternoon.

It was an incredibly tense and entertaining contest, with a late goal proving to be the turning point as Galway ran out winners on a scoreline of 3-23 to 2-24.

Tipperary got off to the ideal start in the game, raising a green flag inside the first four minutes. Predictably, it was Seamus Callanan who got the goal, his 36th in championship hurling.

He showed great skill to gather a tricky ball on the end-line, turning his man and powering it into the net.

.@TipperaryGAA's Seamus Callanan gets an excellent GOAL in the opening minutes of the All-Ireland Senior Quarter-Final! pic.twitter.com/ycc93G4716

Galway would have their opening goal a few minutes later.

Cathal Mannion was the one to get it, producing a touch a class to jink around his marker and bury the ball in the top corner.

This was to be the story of the opening half, with the two teams matching each other stride for stride.

Galway's second goal was very much a team effort. Conor Cooney showed great patience out near the sideline, picking out Conor Whelan who laid it onto Brian Concannon, with the Killimordaly man providing the finishing touch.

Brian Concannon gets @Galway_GAA's second goal of the game! pic.twitter.com/CYtiOhyRSF

With the sides level entering the closing stages of the opening half, Tipperary would put some daylight between the sides.

Patrick Maher got the goal, with Galway punished after being unable to clear their lines.

Tipperary would hold their lead for much of the second half, but it remained tight.

We were set up for a nervy finish to the game after Cathal Barrett sent off after receiving two yellow cards. That mean Tipperary would have to play the final 20 minutes or so with 14 men, with  Joe Canning knocking over the resulting free to reduce the deficit to a solitary point.

Liam Sheedy's would manage to just about keep their noses in front heading into the final ten minutes, with this incredible sideline cut from Joe Canning getting his team back to within a point.

Joe Canning sends the ball over the bar with this sideline cut for @Galway_GAA pic.twitter.com/ZbJmPIoJfv

He would finish the game with a personal tally of 0-12 after a remarkable display.

The deciding moment in the contest would come five minutes before the end of normal time.

Aidan Harte was the unlikely hero, producing a stunning finish to give Galway the lead for the first time in the second half.

That would be the difference in the end, with the reigning All-Ireland Champions unable to get back in front.

SEE ALSO: 'In School I Was Asked What I Wanted To Be, I Said A Down Hurler And They Laughed At Me' 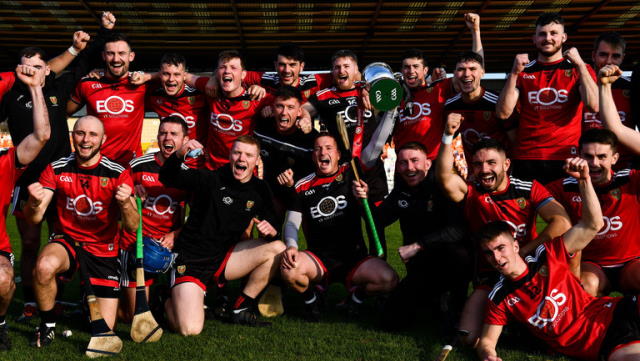