Why Did Davy Fitz And Brian Lohan Fall Out? A Timeline Of A Hurling Feud

Clare and Wexford play this Saturday afternoon in Portlaoise. The stakes couldn't be higher: the losing county will be dumped out of 2020 All-Ireland hurling championship. The prematch hype will centre as much on the sideline dynamics between the two managers - the estranged former Clare stalwarts Davy Fitzgerald and Brian Lohan - as the on-the-field battle between the teams. With many still wondering why did Davy Fitz and Brian Lohan fall out, we thought we'd provide a time of the disagreement ahead of Saturday's qualifier.

Davy outlined his version of events in his autobiography 'At All Costs'. (You can purchase a Kindle version of that book for roughly a fiver on Amazon if you'd like to do some further reading on Davy Fitz) The origins of this beef seem to go back to a Fitzgibbon Cup game in 2014 and the row seems to have continued up until today, though  in fairness to the Wexford manager, he did seem to extend a peace offering to Lohan while speaking to RTÉ during the lockdown.

May 1993: Brian Lohan and Davy Fitz are both named to start in a Clare XV for a Munster championship match for the very first time, against Limerick. The two men become integral components of a legendary Clare side that transforms hurling, winning two All-Irelands and three Munster titles along the way. 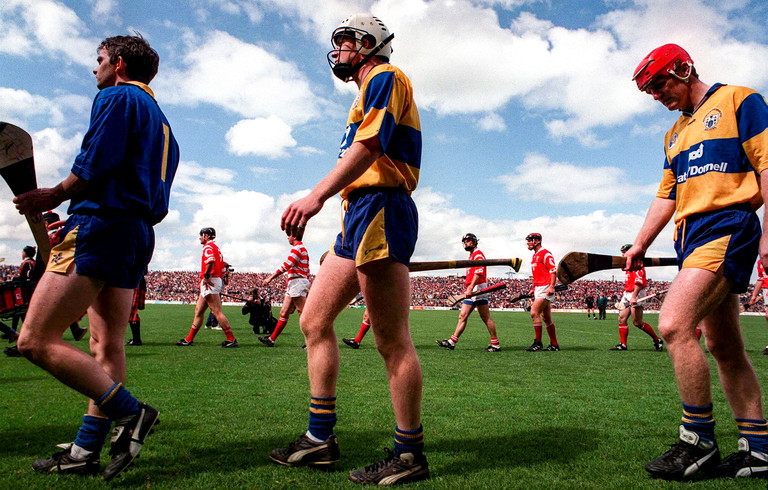 February 2014: Flash forward twenty years. It's the Fitzgibbon Cup. Lohan is managing a fancied UL team that features Johnny Glynn, Padraic Walsh, Dan Morrissey and Jason Forde. They are drawn against Davy's unheralded LIT team in the quarterfinals. The bookies give LIT 6/1 odds of winning. Ahead of the match, Davy staged a bold managerial manoeuvre on par with Mayo warming up into the Hill in 2006. Here's how he described it in his book.

Now, when you play UL at their place they put you in these tiny cramped dressing-rooms that would make the old Páirc Uí Chaoimh seem palatial. The idea, I suspect, is to split you up. So I knew this was coming and decided we'd only use the rooms at half-time, that we'd go straight from the bus into a warm-up on the pitch.

This involved stepping in through bushes at the top end of the field, and as we did so I noticed that, unusually, it was the end UL set out all their training cones on for a warm-up. Straight away, a light bulb went on in my head. We'd reached the field before them, so why not rattle a few cages here? So, sending down the hurley-carriers just to make sure the dressing-rooms would be accessible at half-time, I told everybody else to stay where they were. "Right, we're warming up here," I said. "We don't need any cones!"

I knew there'd be confrontation and, in many ways, maybe that was my intention. Next thing we had people roaring at us to "F**k off back down to the other end …" but I wouldn't let us take a backward step. I remember looking into the square at one stage, four goalies on the line, trying to stop shots in a scene of absolute chaos. I knew Brian was fuming but pointedly never made eye contact. That was my message to the whole group: ignore them, keep doing what you're doing, do not step back a single inch here.

Davy had set the tone by sending his charges through the bushes. Inspired by Tony Kelly, who scored 1-10, LIT shocked UL 2-16 to 1-13. There was no post-match handshake between the Clare legends.  'I didn't need to be told he was absolutely bulling,' Davy wrote. 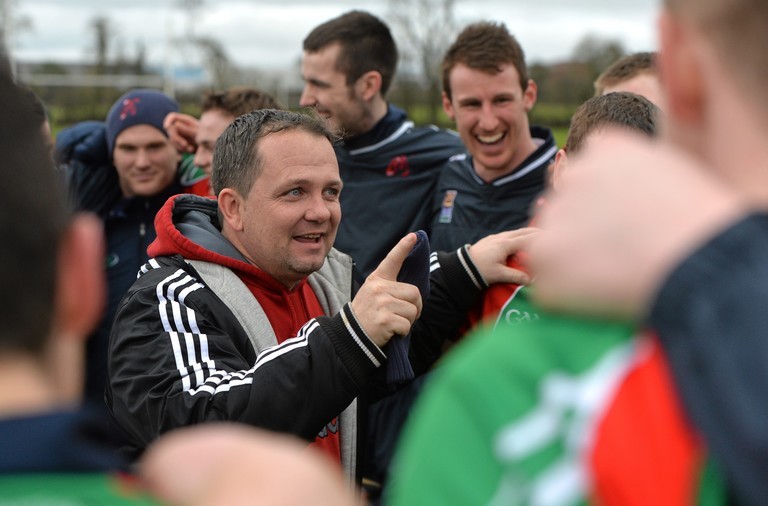 A few weeks later, Davy and Lohan arranged a clear-the-air meeting in the car park of Clare Abbey. It did not go well, as Davy describes in his book:

But it soon became clear that Brian wasn't in any mood for a handshake and fresh start. He told me that he couldn't accept "some of the stuff" that had gone on in that quarter-final, suggesting that - in his eyes - I'd been personally responsible for the worst of it. My response was, "Brian, my job is to win for LIT. I've to do what I have to do, just as you have to do what you have to do for UL. You know me long enough, you know I'd do anything for you. But when we're on opposite sides in a game, it's war. It has to be. You need to get over this"

February 2015: Lohan's UL again meet Davy's LIT in the Fitzgibbon Cup. This time, Lohan's men get the victory in a feisty match that finished 2-18 to 1-14 and featured two sending offs. In his book, Davy says he lingered on the sideline at fulltime awaiting a handshake from Lohan, but it was not forthcoming.

July 2015: Cork eliminate Clare from the All-Ireland championship in Round 2. It's the second disappointing Championship in a row for Clare after winning Liam MacCarthy with Davy in 2013. Lohan calls on Ger Loughnane to conduct a root-and-branch review of how Clare conduct their business. 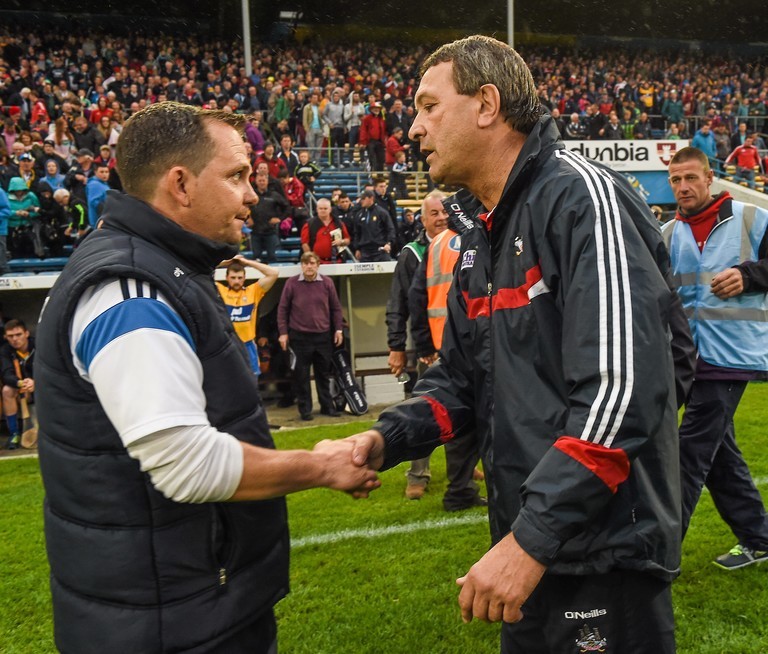 “I don’t think the county board is independent enough. By their actions, particularly in the immediate aftermath of the Cork defeat, they have shown that they are not independent. You could get the likes of Ger Loughnane to chair that independent committee. There is no doubt about his commitment to Clare and his credentials," he said at the time.

According to his book, Davy was not overly pleased by the suggestion. (Fitzgerald's father is, of course, the secretary of the Clare County Board), and he let Lohan know about it over text.

"What are you at?" I asked in the text. "Do you not think I'm getting enough stick without you jumping on the bandwagon?"

His response was incredible. "The Review will help you," he said.

My reply to that was pretty strong, and I won't repeat it. But I basically told Brian what I thought of him. To me, I should have been getting more loyalty from these guys, but I was getting none. On the contrary, I just got the impression they were determined to undermine me.

May 2019: Lohan questions whether Davy's sideline behaviour constitutes genuine passion for the game.

“I don’t know if it’s genuine passion,” Lohan tells a reporter at a press event. “We’re all passionate about the game, but we don’t... we show it in different ways. He has the way he does things and people have to kind of fit into that, but I think some of the antics, they’re not great.”

February 2020:  Lohan's Clare defeat Davy's Wexford in the National League. According to Brendan O'Brien of the Examiner, there was no again postmatch handshake between the men.

There was no handshake between the managers when this ended. Brian Lohan merely pumped both fists when the last whistle blew and made infield. Davy Fitzgerald lingered on the line, relatively emotionless after his side fell three points short. 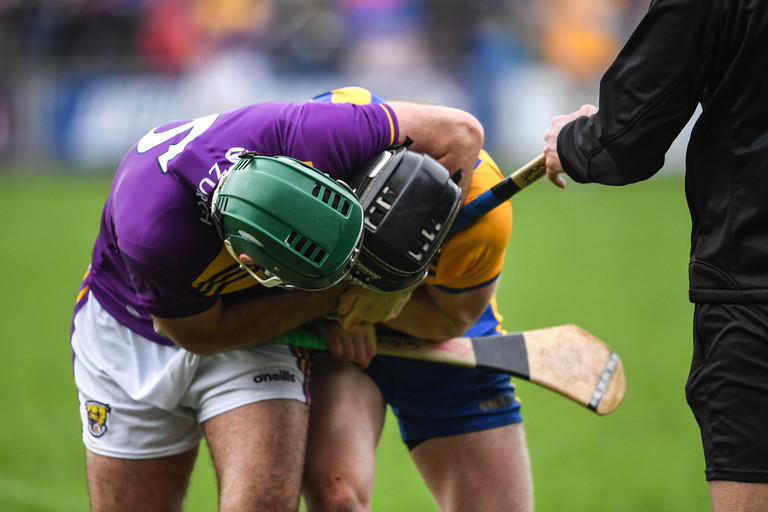 June 2020: While speaking on the Sunday Game, Davy appears to extend an olive branch to his former teammate.

“When you are a manager and you get criticism from your own, it does hurt. I probably took it too personally. Maybe you have to live with that. I hate that it came from fellas you played with.

“Brian and I had a unique friendship. Make no mistake, he was one of the best full-backs I have ever seen.

“As regards going forward with Clare, I honestly want to see Brian do well. That is 100 per cent.

“I’m disappointed it (their differences) has come to where it is now. I got hurt from a bit of criticism. Brian got hurt from what I said in my book. Maybe we should be big enough to forget about it and move on.

“Having dealt with him over the years, I know he is a good guy. I wish him and Clare the best.

November 2020: Clare and Wexford are drawn together in the hurling qualifiers. When it's all decided, will we have a postmatch handshake?