After an incredible 2016, 2017 might be perceived as a bit of a let down for Irish sport. Looking back over the last 12 months though, there have been some incredible instances of drama, athleticism, comedy, sportsmanship, and achievement.

As we once again look back on the year that was, we present out top 30 moments from the Irish sporting year.

If you were predicting moments of the year at the beginning of 2017, the 2:35 at Clonmel on a Thursday in December would not have made the list of possible events and venues.

Jack Kennedy made it so though. The young Kerry jockey was responsible for one of the rides of the year.

On the opening lap aboard Robin Des Mana, Kennedy popped out of his saddle. Miraculously, he managed to remount and go onto win the race.

After the outright crime that was perpetrated against him in Rio, Mick Conlan’s pro debut on March 18 felt like a deserved victory lap on an amazing amateur career and the foreshadowing of a blockbuster career in the pro ranks.

Amazingly, a professional debut in Madison Square Garden on St Patrick’s Day weekend that featured Conor McGregor as tricolour bearer was only the second biggest Irish pro debut of 2017, but all the same, respect to Conlan - in his Apollo Creed in Rocky IV get-up - for accentuating the spectacle.

His first pro fight was mostly forgettable - Tim Ibarra was surprisingly game for one round anyway - but in the end, Conlan swatted him aside. Conlan finished 2017 4-0 and left Irish fight fans salivating over the future fights to come.

You can write your own gags about the people of the midlands willing to take the shirt off your back, but Donegal v Longford in Ballybofey furnished us with one of those gloriously rugged, carelessly dignified GAA stories.

Longford lost their star forward Robbie Smyth to a blood injury midway through the first half of this championship clash, with Smyth not allowed to return as his #13 jersey was mottled with blood.

Cue consternation among the Longford bench. There was no replacement shirt on the sideline, so to haul his county out of a hole, Longford fan Eugene Quaine whipped off his #13 shirt, and passed it down the stand to give to Smyth.  The Longford forward finished the game in a shirt that had passed through a couple of local pubs earlier that day, and returned it afterward.

Quaine sent Balls this video of him walking back across the pitch after the game, the jersey successfully retrieved:

The curtain-raising for the All-Ireland Senior Football Final was a solo effort. It took David Clifford just 11 seconds to tug on the rope.

The TG4 clock was not even on the screen by the time the 18-year-old’s boot forced the net to bulge for the first of four times in the All-Ireland minor final against Derry.

It was both the end and the beginning; the end of Derry’s chances in the game and the beginning of new hope for Kerry football. A Kingdom dreams he will be the difference in their efforts to stop the Dublin juggernaut.

Clifford scored 4-4 in all, a remarkable performance in an All-Ireland final.

His third! @Kerry_Official's David Clifford put in a Man of the Match display in the @ElectricIreland All-Ireland Minor Final yesterday! pic.twitter.com/yp6jEp3ChK

Gold medals in athletics for Ireland are a rare occurrence. Even rarer still: a gold medal in a sprint event.

In mid-July, at the European U20 Championships in Italy, 18-year-old Gina Akpe Moses stormed to victory, holding off Germany's Keshia Kwadwo and Ingvild Meinseth of Norway in the final.

Running for the Blackrock club in Louth, Akpe Moses said that her semi-final performance gave her an inkling that a podium place was a possibility. It was not not until 20m from the line that she thought gold might be within her grasp.

The look on her face as she celebrated post-race expressed the joy of someone who had just achieved reward for years of hard work.

75 seconds into the All-Ireland final, Con O’Callaghan picked up the ball just inside the Mayo 45. Eight seconds later, he made Mayo hearts sink.

The Young Footballer of the Year had weaved his way through the Mayo defence and finished with a calm contrasting with the demeanour of everyone else inside Croke Park that day.

Faced with the giant figure of David Clarke, he embraced the insightful analysis of Kevin McManamon who had advised that shots on the Mayo keeper should be kept low.

The ball trickled to the net as 15 Mayo men and thousands more in green and red looked on helpless.

GOAL! Con O'Callaghan continued his good form for @DubGAAOfficial yesterday by scoring this goal early on in the All-Ireland Football Final pic.twitter.com/4aT1t3bMwT

It’s the unexpected that makes a summer. That adjective can certainly be used regarding the Munster quarter-final between Cork and Tipp.

A young Cork team featuring five debutants claimed their first Championship win against Tipp in seven years. It was a thrilling game, one which Cork edged by points as they reanimated what had looked to be a dead rivalry.

And nobody saw it coming. 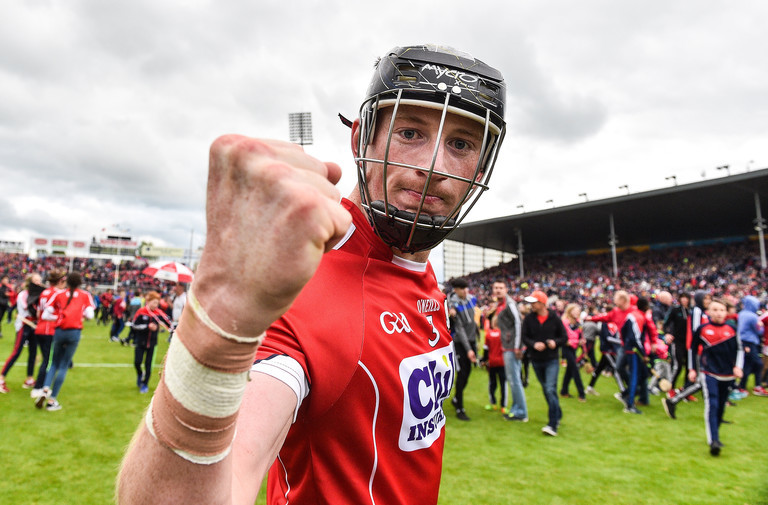 The highlights were myriad for Cork City this year, but there is no doubt as to the moment Mark McNulty will treasure more than most. While celebrating last year’s Cup final win, McNulty commandeered a microphone, into which he roared a couple of unkind things about Dundak. He would later lead a rendition of “fuck the Lilywhites” after Cork won the league.

In the build-up to this year’s final, Stephen Kenny tried to turn the screw in Kennyesque fashion, accusing McNulty of finding his material in “the gutter”. He also accused him of ringing Stephen O’Donnell to gloat, something John Caulfield would later dispute as untrue. Nonetheless, McNulty earned the abundant scorn of Dundalk fans online, and how satisfying it proved for him to be the hero in the penalty shoot-out that decided the cup: saving Michael Duffy’s spot-kick….in front of the Dundalk fans.

First Galway were grounded, and then confounded. Roscommon dethroned the reigning Connacht champions at Pearse Stadium, which was met by a delirium glaringly absent from the other three provinces.

They were utterly dominant, and it was an emphatic vindication of Kevin McStay. Derided by local media in the months preceding the final, McStay ended the game in tears. He elected to dash down the tunnel at full-time, with thousands of Rossies surging in the opposite direction in the best pitch invasion of 2017. 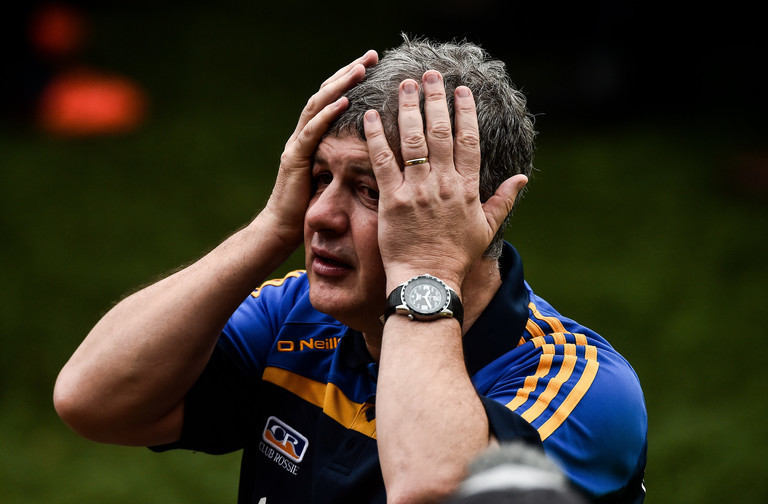 When tragedy strikes a sports person, an old line is trotted out about it putting sport into perspective. Ryan McBride’s unfathomable passing showed the importance of sport: football offered him the opportunity to amplify his virtues: “a warrior and a gentleman” read one banner at the Aviva Stadium.

The scenes ahead of the qualifier with Wales were a fine tribute to his memory, as the stadium came together in warm applause in the memory of McBride, Milo Corcoran, and Ray Brady. Along with this, the Welsh team presented President Higgins with a Welsh jersey emblazoned with “McBride 5” ahead of the game, while James McClean wore the #5 shirt in tribute to his fellow Derry native. 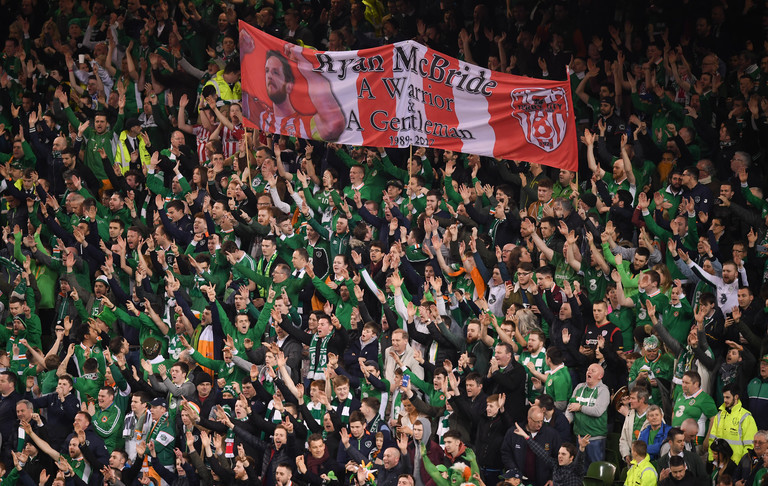 Check back with us tomorrow and Friday for the top 20 moments of the year.