It's time. Having counted down our Irish sporting moments of the year from 30 to 11, it is time to unfurl the top ten, and more pertinently, number 1.

Spoiling the English Grand Slam, if not Championship, was deeply satisfying, but more importantly, this was the game that Ireland re-asserted themselves as the second-best team in the Northern Hemisphere. It provided some deeply-needed impetus heading into the rest of 2017, and will be remembered for a barnstorming return for Peter O'Mahony. Few players have achieved so much in eighty minutes: it led to his Lions captaincy for the first Test against New Zealand, and incontrovertible proof that, when he's available, he must be in Ireland's back-row.

Though he won his first ever All-Ireland club football medal back in March, it was not Com Cooper’s first time being involved in a club final victory.

25 years previous, when Crokes won their only other All-Ireland title, Cooper was a mascot on the day his side defeated Thomas Davis. Back in March, he did far more than just pose for pictures: he scored 1-2 as Crokes beat Slaughtneil.

Victory against the Derry side gave Cooper a medal he will treasure equally as much as any of his five All-Ireland inter-county ones. The delight on his face as he turned to celebrate with manager Pat O’Shea told us that. 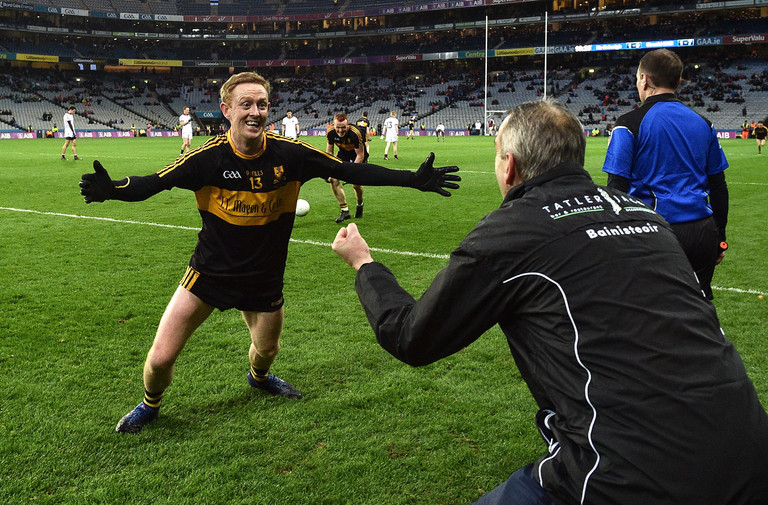 After losing three finals in a row, the Dublin ladies finally got over the line this year. The girls in blue powered to a 4-11 to 0-11 victory against Mayo in front of a record-breaking attendance of 46,286. The scoreline didn’t do the game justice as it was thrilling, with Mick Bohan’s sides keen eye for goal proving crucial.

As well as a fantastic attendance, the subsequent ‘Blues Sisters’ documentary was a revealing insight into the physical and mental challenges the team had to overcome during their title run.
Maurice

Valerie Mulcahy and Aislinn Desmond on the notable day for Ladies football as a record-breaking crowd of over 46,000 attend Croke Park pic.twitter.com/CK2KvDN2IG

7 - Sean O’Brien’s try vs the All Blacks

The notion that the Lions could compete with the All Blacks appeared a fanciful one until the 36th minute of the first Test.

Warren Gatland’s side had looked pedestrian compared to the All Blacks prior to Liam Williams side-stepping Kieran Read and then bursting out of his own 22 to set the Lions on the way to one of their all-time great tries.

Jonathan Davies and Elliot Daly combined to get the ball within five metres before Sean O’Brien crashed over after making a lung-busting run to support his teammates.

Belfast witnessed myriad boxing achievements throughout 2017, but there was no greater achievement than Ryan Burnett's victory against  Zhanat Zhakiyanov in October. With that victory, Burnett unified the WBC and IBF world titles, and extended his record as a pro to 18-0.
Incredibly, four years ago, Burnett's split with Ricky Hatton left him homeless for six weeks, sleeping in a jeep with his father. Now, Adam Booth has unlocked Burnett's talent, and 2017 was the year he established himself as a bona fide star.
Gavin Cooney

One of 2016’s low points was when a visibly devastated Katie Taylor looked the Irish public dead in the eye through RTE’s camera and confess “It's been a very, very tough year.”

Thankfully, 2017 saw a change in fortunes as Taylor made her pro debut, won a world title and successfully defended it. Her pre-title fight preparation was less than ideal when the champion, Anahi Sanchez, twice missed weight. Eventually, it was announced the fight would go ahead with only Taylor capable of claiming the belt.

She set out to do just that and dropped Sanchez with a cannon of a body in the second round. Ironically, Taylor’s amateur career, which ended in disappointment, massively aids her ability professionally. The array of opponents she has clashed with ensure she is versatile and capable of going toe-to-toe with just about any style of fighter.

To clinch a world title in her first year as a pro is a testament to her ability. As her mother, Bridget, embraced her, the delight on Katie’s face at being crowned world champion was obvious.

Sport is often dismissed as a ‘distraction.’ A brief interlude from the banality of life. In actual fact, it is so much more than that. It is a coping mechanism, a uniting vehicle, and as David Burke demonstrated, a superb platform for a tribute.

After ending a 29-year famine, Burke took centre stage to deliver his All-Ireland final victory Speech. He then paid tribute to the late Tony Keady, who passed away at 53 just a month earlier.

“Twenty-nine years ago, this man was man of the match in the All-Ireland final of 1988. It would be remiss of me not to mention his name — the great Tony Keady.

To Tony’s wife Margaret, children Shannon, Anthony, Jake and Harry, we’re hoping that lifting the cup today will give you some solace from your grief, if only for a few seconds.”

Keady was the at the heart of one of Galway’s greatest sides of all time. His loss shocked the county and his family were involved in the on field celebrations. Burke also paid tribute to Niall Donohue, who died tragically in 2013.

Burke paired the high of sport with the tragic lows life guarantees, it was a class act and a superb reminder of sport's power.

Longing on a large scale makes history, and this year, Dean Rock nervelessly added another chapter to Mayo's. Diarmuid Connolly, who had haunted the championship while barely playing, ended up winning it: he was fouled in the dying minutes of the final, and having initially hinted at taking it, he elected to place it for Dean Rock.

Rock - having missed the free in the final minute of the National League final - made no mistake this time. He took his time, waited for the clock to tick and the GPS to intrude, before splitting the posts. He even betrayed some emotion afterward, with a curt fist-pump.

Remarkable nerves, at the end of a game which had frayed everyone else's.

The final installment of the Tipp/Galway trilogy got its perfect crescendo.The best game of the season - as part of the sport’s greatest rivalry of the decade -  was decided by a moment of genius by the sport’s greatest player. Canning’s role was redefined this year - heck, he didn’t take a shot from play in the Leinster final - but his greatness vaulted to the surface when it was needed.

Deep in injury time, Canning trotted back to take a free deep in his own half.   His original free dropped short, and forced a fine save from Darren Gleeson (named Brendan in the moment by Ger Canning). The resulting clearance found Johnny Coen and as the clock ticked past the four minutes of stoppage time, he turned back and found Canning calling for the ball.

He obliged, and in a split-second, as Tipp players descended upon him, Canning looked at the posts, dropped the ball to his stick and with - to borrow a phrase - the liquid whip of his wrist, sent the ball over, and most of the country into raptures.

Here it is, replete with some Titanic music.

It is difficult to bestow upon this goal the ecstasy it deserves, having been tainted by the Danish disaster. But it was a genuinely great moment. In a crude game, Ireland decided to pick the lock. Jeff Hendrick chased a ball along the sideline, and Harry Arter fooled everyone except James McClean, who rifled the ball past Hennessy.

McClean sprinted to the Irish fans, beating his chest and kissing the crest in a kind of elated stupor: Ireland scored with virtually their first move of any substance. From there we clung on for a great victory, gloriously ignorant of what was to come.

James McClean, you absolute dancer. How about that step over from Harry Arter?!? #WALIRL#RTEsoccerpic.twitter.com/75hDzigE9L

We debated the order of the top three in a special Facebook Live show, which you can angrily disagree with below.

Merry Christmas and a Happy New Year to all of you beautiful people, and thanks for following Balls. Here's to many more moments like these in 2018.

Irish Life
2 years ago
By Michael McCarthy
How Well You Know Irish Sport In 2017? Take Our 32 County Quiz Of The Year
3