2017 was full of controversy, drama, achievement, successes and failure. All in all, it produced a ton of memorable moments both good and bad.

Today, we present moments #20-11 to the Irish sporting year.

Paul Dunne’s final shot at the British Masters brought the house down in Newcastle. The Wicklow man chipped in on the 18th - the perfect way to cap his first ever professional victory.

Dunne went into the final round tied for second, a shot behind leader Robert Karlsson. He tore up the course, carding three birdies and an eagle on the front nine. That was followed by a further four birdies on the back nine.

Even the close presence of Rory McIlroy could not derail Dunne. McIlroy landed five birdies in six holes to get himself within a shot of Dunne.

For a few brief moments, there was the tasty prospect of a playoff between the two. Dunne would do more than just hold his nerve to ensure that did not happen.

On a Sunday afternoon in mid-November, GAA fans who were not in Aughrim flocked to Twitter and Radio One - there was a shock on the cards.

It turned out to be the shock of the year: Rathnew toppled St. Vincent’s, the favourites for the All-Ireland club football title, in the Leinster quarter-final.

Rathnew manager Harry Murphy would later credit the Dublin club’s numerous appearances on TV through the latter stages of the Dublin SFC with helping build a plan to counter Diarmuid Connolly and Co. Ironically, the execution of Murphy’s masterplan was not available to watch. 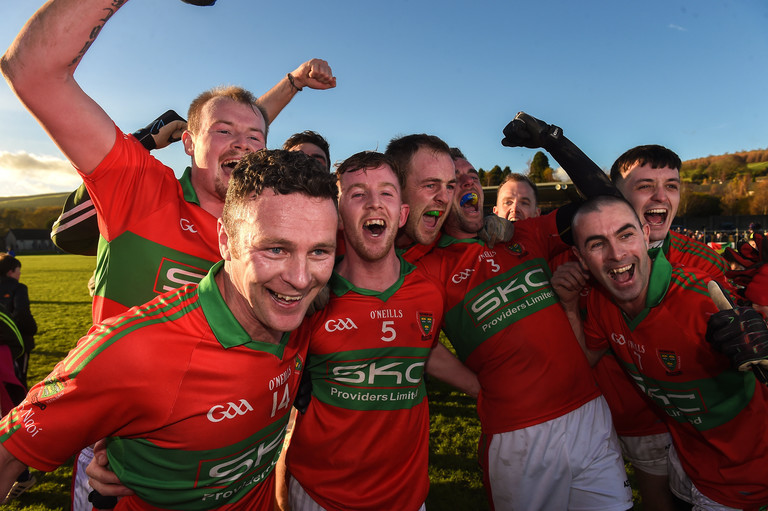 18 - Cork win the camogie final at the death

Not one but three Kilkenny players converged on Cork’s Julia White at the height of her backswing as she faced her hurl for home. It was six minutes and 12 seconds into injury time and, with the sides level at nine points apiece, it seemed a replay was inevitable.

Kilkenny had just batted an in-around-the-houses free from Cork goalkeeper Aoife Murray - one last moment of dread averted. However, all was not safe. A misplaced pass gifted possession back to Cork. A few quick handpasses later and White - on as a second half substitute - had the sliotar in her grasp and, thanks to a couple of quick side steps, a glint of light ahead of her. Just enough room to get a shot away.

Two Kilkenny defenders tried to block her shot from either side, another threw her body straight in front of the swing. But destiny was not with them. It was firmly on the side of Ms White. Less than a minute later the game was over. White had her All-Ireland medal, Cork captain Rena Buckley had her 18th.

Joe Ward won an unprecedented third European Championships gold medal last June. The Moate man beat Russia’s Muslim Gadzhimagomedov on a unanimous decision in what was a real exhibition of touch and move boxing. His shots were clean, his defence sound and the southpaw is blessed with terrific anticipation that makes him a nightmare to tag.

Ward followed this performance up with a silver at the World Boxing Championships. Now captain of Bernard Dunne’s IABA team, next year will see Ward lay crucial groundwork ahead of Olympic qualifying in 2019.

As he demonstrated this year, Ward is on top of his game and Ireland’s finest amateur boxer right now.

Austin Gleeson didn’t have a good year. After being Hurler of the Year in 2016, he struggled to get involved in a large amount of Waterford’s games on the way to the All-Ireland final.

However, it was in the second half of the All-Ireland semi final with Cork that we were reminded just why this guy might be the most unique talent in Irish sport. With the game there to be won, he suddenly burst into life with a huge point, a wonder pass for a Jamie Barron goal, and then this

All kinds of magic. And let’s face it, we were all shouting “PASS IT!” for a good three-quarters of that run. But how can you argue with that kind of talent?

During the second half of Dublin’s Leinster quarter-final victory against Carlow in early June, Connolly laid a hand on linesman Ciaran Brannigan

No punishment was dished out in the moment but it would come in the days following the game. Connolly was banned for 12 weeks. Dublin decided not to take the appeals process to the max.

It would be the closing moments of the All-Ireland semi-final against Tyrone before Connolly saw action once again.

Dublin are back with a win. But Diarmuid Connolly couldn't escape controversy. Potential ban for this? #LeinsterGAA #GAA #GAAclips pic.twitter.com/w9EcI831If

Wexford danced to the beat of Davy in 2017, and nowhere did they do it with more vigor and joy than the night they knocked the crown off Kilkenny’s head. Cody and co. were beaten in the Leinster championship on a stifling evening in Wexford Park. Lee Chin put himself in All-Star contention with a performance for the ages which ended with his being embraced and back-slapped on the field by half of Wexford.

The only man who didn’t make it onto the field was Davy Fitzgerald, as punishment for being the only one to do so in the league earlier that year. His foray onto the field left him looking on from a specially-constructed box in the stand. He was cornered by a jubilant Liam Spratt after the game, who thrust a microphone before him and declared, “I don’t care if there’s a ban Davy. Say something to the people of Wexford”.

Skibbereen’s annexing of world rowing continued in 2017. There is idle wonder at what is in the water down there, but there is no doubt as to what’s on it: a bunch of world champions. As Paul O’Donovan retained his gold at the world championships in Sarasota, Mark O’Donovan and Shane O’Driscoll won the lightweight doubles’ men race, holding off challenges from Italy and Brazil.

The pair had been undefeated all season, and justified their favourites tag in style.

The two lads are actually the subject of a documentary to be broadcast tonight on Eir Sport.

"Before, it was worse. We used to share a bedroom."
Our Christmas Specials continue tonight with our Irish Rowing Special.
8.30pm on eir sport 1. 🚣 pic.twitter.com/h1lSym8KWo

12 - The O'Briens and The Melbourne Cup

If Skibbereen have turned world rowing into a local competition, then the O’Brien family went one better by making the Melbourne Cup a family affair. This year’s competition yielded a remarkable 1-2-3 for Irish horses.

The race has always eluded the great Aidan O’Brien, but he came agonisingly close to winning it for the maiden time in 2017, as Johannes Vermeer finished second. Who was the trainer to pip Aidan to glory? Remarkably, it was his son Joseph, who trained the eventual winner, Rekindling. At just 24, Joseph became the youngest trainer ever to win the race.

Peter O'Mahony has quite the journey in 2017.

On the international front, he had lost his place in the Ireland team to Munster teammate CJ Stander at the start of the year. On top of that, a hamstring injury meant he wasn’t even involved in Ireland’s first two games of the Six Nations.

When he did return, it was as a fourth quarter substitute in the win over France. Then, out of nowhere, Jamie Heaslip was injured in the warm-up for the final game of the competition, and O’Mahony was propelled in from the start.

A man of the match performance in a famous win against England later, and the Cork man went from nowhere to suddenly being involved in Lions conversations.

He was selected in the 41 man squad, though many thought as an also-ran. Cream (and leadership), though, always rises to the top, and so did O’Mahony. After an inspiring performance against the Crusaders, he was named captain five days later against the New Zealand Maori, and with Sam Warburton’s fitness a serious issue, suddenly there was talk that O’Mahony, never considered a possible Test starter, would captain the team in the first test against the All Blacks.

On June 21st, the Munster captain was officially named Test captain of the Lions, something only 10 Irishmen had done before him.

An unbelievable achievement and something that will go down in history. Unfortunately, Warburton would reemerge for remainder of the Tour, but O’Mahony leading out the Lions was certainly one of the Irish sporting moments we’ll remember for a long time.

Check back with us tomorrow for the top 10 Irish sporting moments of 2017.

SEE ALSO: The Best Moments Of Commentary From 2017