Vote: Who Is Ireland's Most Universally Liked Current Sportsperson?

During the week, Balls.ie met up with the ever engaging Sean O'Brien at a Lifestyle Sports event. There he told us about his strange incident living with James Lowe, and about his desire for "a few normal people around" the Irish squad since fellow farmers came on board.

O'Brien is always good value, on and off the pitch. It got is thinking... Is there someone in Irish sport as universally liked as Sean O'Brien?

As expected, there were plenty of suggestions. But to decide just who is the most popular sportsperson, we need your help.

To make things a lot simpler, we've decided to only include currently active sports people. The likes of Paul McGrath, Sonia O'Sullivan, Ken Doherty, Maurice Fitzgerald and Eddie Macken would be worthy inclusions for sure, but for now, let's concentrate on those still competing at the top level.

So, try to set aside your county/province bias, or your bias against certain sports, and just consider the individual. All are adored, but who's the most beloved?

One of the most talented hurlers we've ever seen, and one of the nicest guys in sport. Finally reaching the Holy Grail of an All-Ireland with Galway, and his "moment of the year" candidate point against Tipperary, were both met with an outpouring of delight across the country. His celebration with his parents in Croke Park and the leadership shown around the death of Tony Keady just made it all the more special. 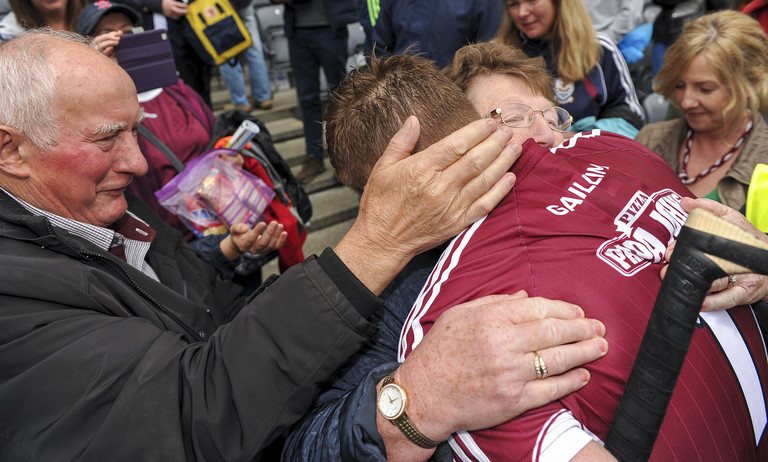 From the moment Coleman broke through at Everton, everybody loved him. From there, there was the clamour for Trap to put him in the Ireland team. When established, his performances and leadership at Euro 2016 elevated him to cult hero status. Since then, his broken leg, the way he reacted, and the way he continued to be a leader around the Irish squad in the following months have all just intensified the popularity of the Donegal man. 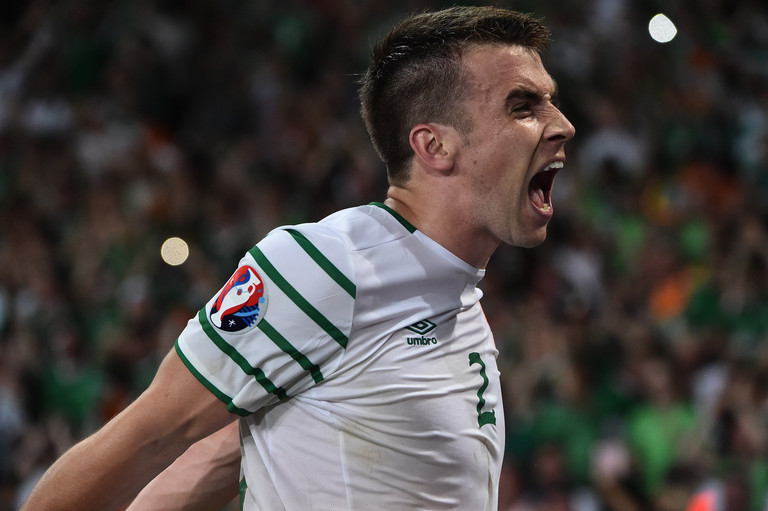 Someone who just loves life, and does it at the very top of his game. One of Ireland's most talented athletes, his popularity will probably continue to grow as he rises through the professional ranks. His bromance with Paddy Barnes remains our favourite in Irish sport, and of course, there was this.

One of the nicest guys in sport who just so happens to be the former middleweight champion of the world, and the possessor of a devastating knockout punch. You'd be hard pressed to find anyone who doesn't like the Limerick man.

He won the Irish Open as an amateur. He went pro, and has risen through the ranks to someone who has led majors. Through it all, he has remained the same guy, and seems to spend his summers watching GAA or checking scores from exotic places around the world. His da helped Offaly stop the Kerry five-in-a-row. A very strong beard game also helps. 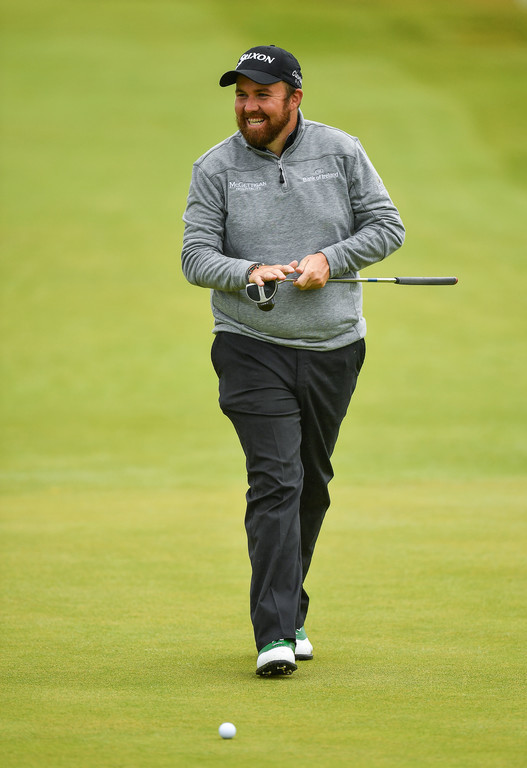 For Vienna. For Cardiff.

In the generation after there was a (unfair) sense of the millionaire footballer fed up at playing for Ireland, McClean was the player who epitomised what it meant to play for his country. He wears his Irishness on his sleeve at all times. And be it hard tackles or crucial goals, he always leads from the front playing for Ireland.

The treatment he gets in the right wing British press for his refusal to wear a poppy is also something that gets the country behind him annually. 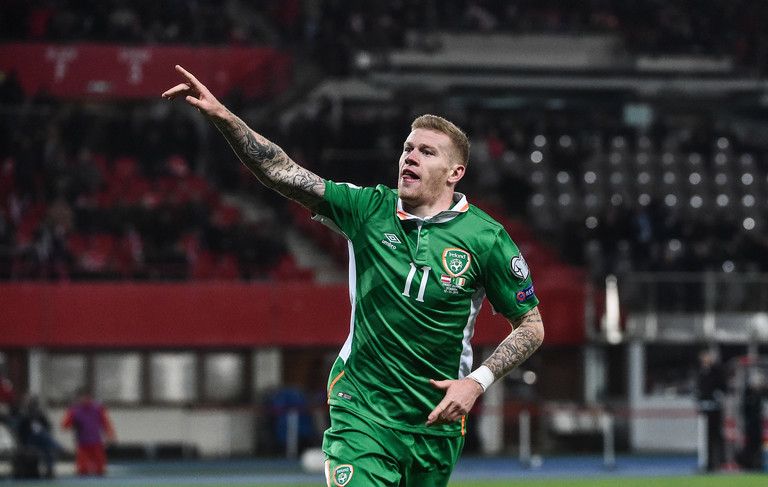 Already one of the most loved Gaelic footballers in the country, his twilight years in a Mayo jersey and his constant quest for Sam has just endeared him to the country all the more. Always a hugely skillful and effective player, and one of the more honest and approachable GAA players off the field, his Lazarus-like comeback to form last year was probably the GAA story of the year, and he was rewarded with a Footballer of the Year award. Even ardent Dubs fans would have to admit they have a soft spot for Andy behind it all.

Maybe not the Rossies though. 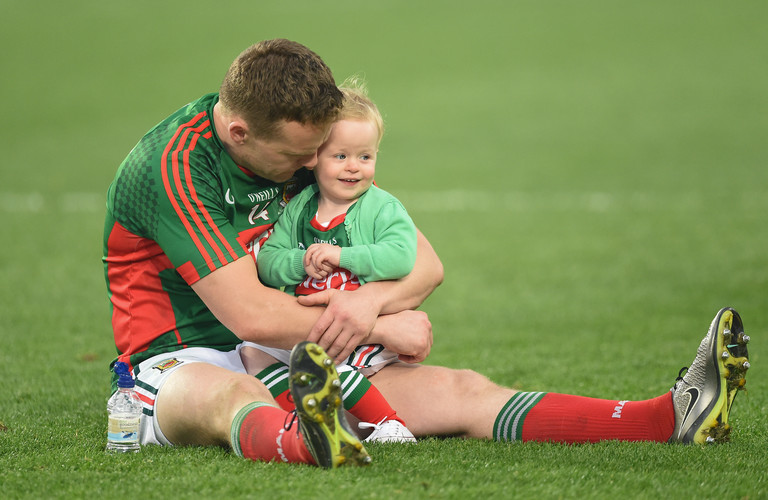 From capturing our hearts in London where a possible gold medal turned into an agonising 4th place on the last day of her event, to coming back four years later and picking up the nation after the devastation of the boxers' eliminations.

There's nothing like the Irish contender in a sport very few people know anything about to really get the country going. Twice, Annalise has done that with sailing. An Olympic silver medalist and someone who always has a place in the hearts of the Irish sporting public. 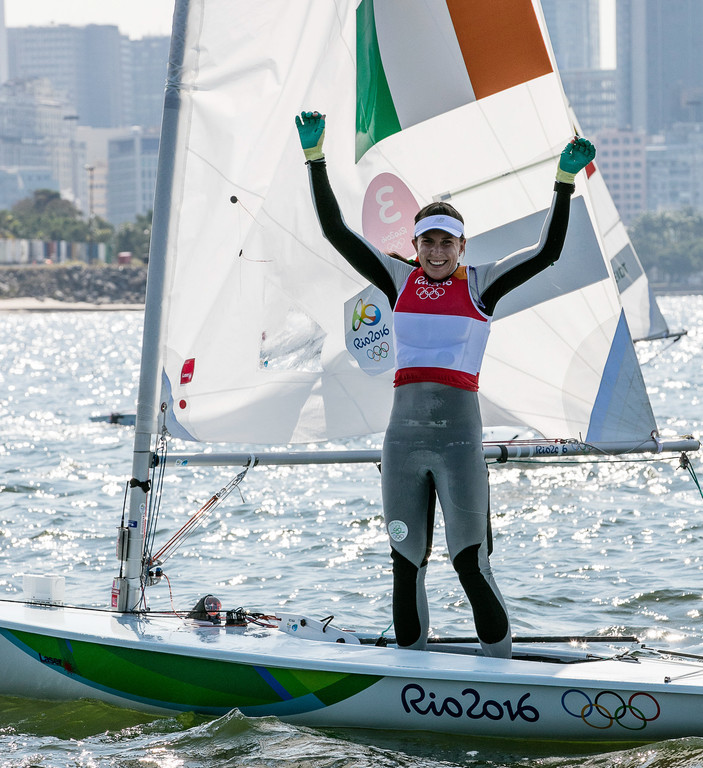 Sean O'Brien was a breath of fresh air for rugby. In a sport of stereotypes, him playing for Leinster shattered them.

On the field, he blends the workhorse with the flair, he is gives everything he has and he stands up for his teammates. Off it, he's a farmer and he's up for a bit of craic. Combined, that's an awful of what we look for in a sportsperson in this country.

His constant battles with injuries, and the way he continues to come back from them also help his likability. We always know our time with Seanie is limited. We need to make the most of him while he's around. 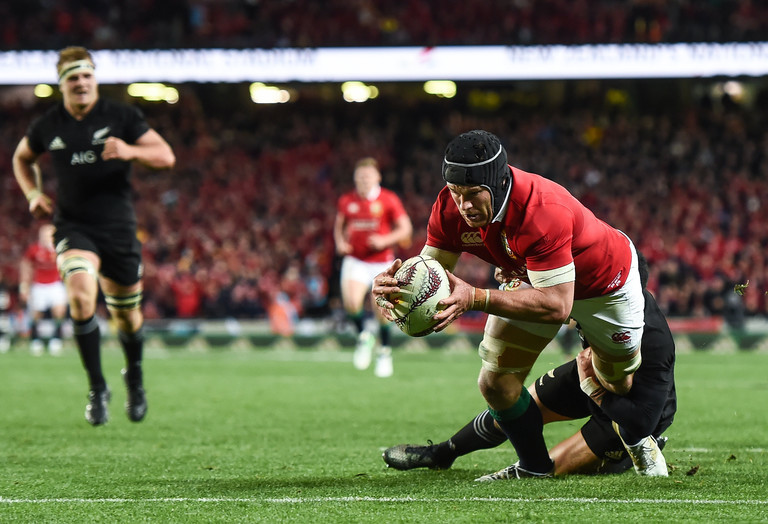 This is a poll for a "sportsperson" (singular), but we simply to want to have to divide Gary and Paul. They come as a team, and it's as a double act they shall be judged.

Stepping away from their unbelievable achievements, including winning an Olympic silver medal, the way in which they've handled themsevles, before, during, and after, has made them the darlings of the country. How could you not love these lads?

Very few players in any sport wear their heart of their sleeve like the Munster captain. The natural successor to the likes of Foley, Galwey, O'Connell, and O'Gara, O'Mahony is like a throwback rugby player. He's the type of player that illicits a cheer like no other when he wins a turnover at the breakdown, or steals a lineout. You only had to witness the outpouring of joy, excitement and pride when he was named as captain of the Lions for the first test in New Zealand last summer to measure how popular he is across Ireland. 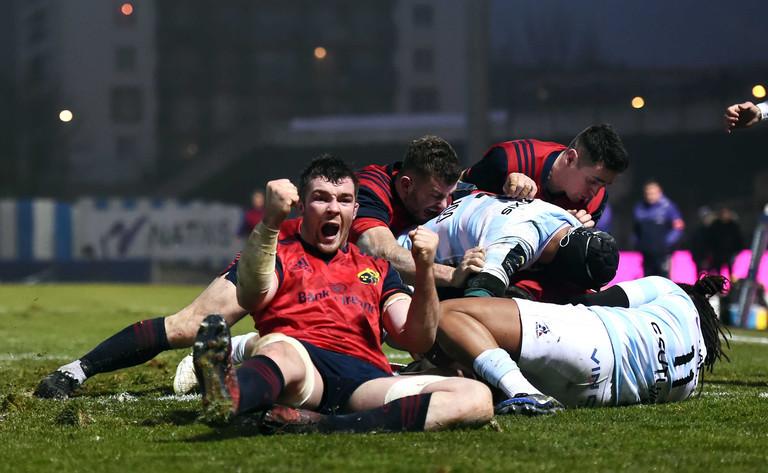 The first lady of Ladies' football. Cora Staunton is a living legend. The growth of her game over the last number of years has been fantastic to watch, but before it happened at all, there was Cora. Playing for Mayo since she was 14, she has racked up some of the most phenomenal scoring displays you can imagine over the years. They became the stuff of legend and were talked about around the country.

Even now, when you would think the ever evolving sport has caught up with her, and in her mid-thirties, Cora still was able to put on the kind of year when she was the driving force in Mayo reaching an All-Ireland final, and for her club Carnacon going a step further and winning the All-Ireland club title.

After all that, she's still up for a new challenge, and is currently in Australia preparing for her AFLW debut as a professional with the GWS Giants.

The anger displayed around the country when the Dublin manager had the nerve to question how Cora spoke to referees in the build up to the All-Ireland final showed the esteem in which she is held around Ireland. 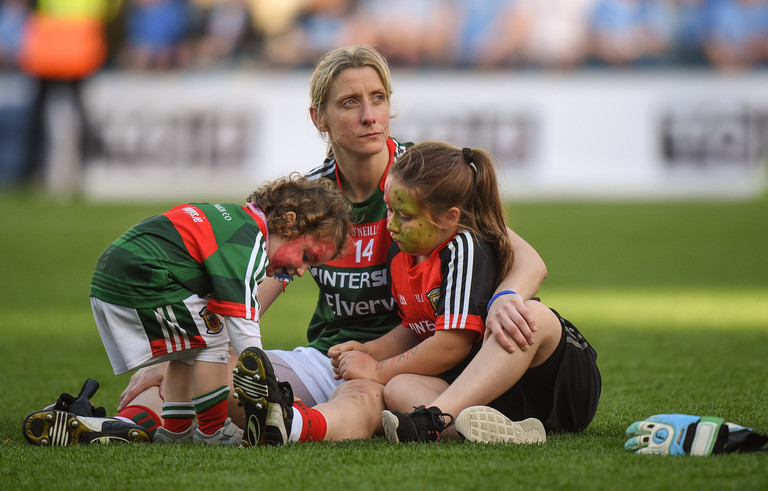 Like Staunton, Katie was a legend before most of us had even seen her in action. You would hear stories about Katie Taylor utterly dominating a sport like perhaps no Irish person ever had before.

Since then, her legend and popularity has only grown. She stopped the nation for her gold medal fight in at the London Olympics. It's hard to overestimate the pressure she was under that day. Not only was she the first Irish person ever expected to win a gold medal going into a Games, she was also the posterchild for her entire sport, making its Olympic debut.

While we shared in her joy in London, we too experienced her pain in Rio. Now she's a World Champion as a pro, and we're experiencing it all again. She's main eventing boxing cards on Sky Sports, defending her World Title, and it's all normal, because it's Katie. And behind it all, she's still Katie, and talks about going home and enjoying "The Christmas" in her post fight interview. 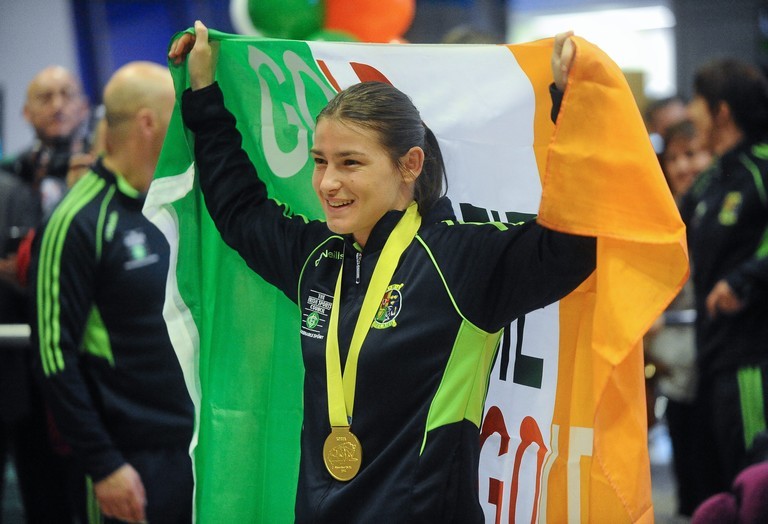 Big Jonny Walters epitomises what we love in an Irish sportsman. He might not be the most naturally talented player in the world, but he makes up for it with his heart and effort. Big, strong and not afraid to use it, other teams must hate playing against him.

He became a cult hero for Irish fans for all that, and for some of the most crucial goals Ireland have scored in recent years, including the goals that sent us to Euro 2016.

We've chronicled all the reasons he's deadly here, but you already knew that. 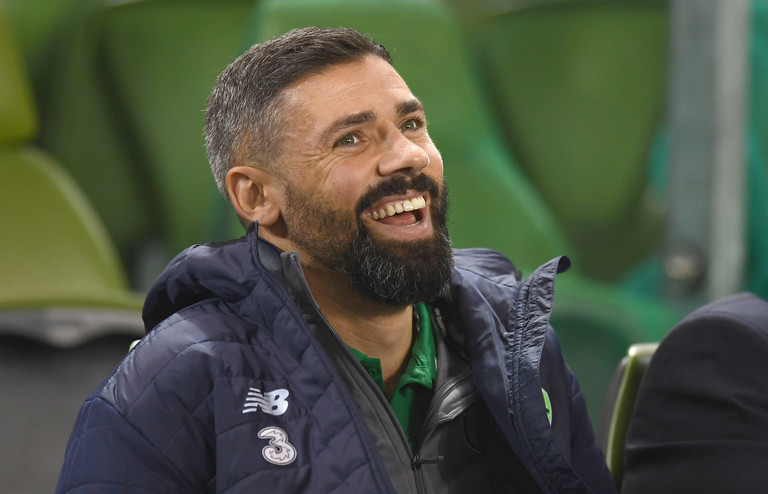 So there are your 16 candidates. Sorry if we've left anyone out, but it's a pretty strong list. Get voting!

(Note: We have quickly realised that this list doesn't include a certain Wes Hoolahan. We can only apoligise to the Wes brigade, but as you know, he's well used to be undeservedly left out.)