There's nothing quite like a streaker in sport. The thrill those at a game get from seeing someone that isn't supposed to be there run around on the pitch is unmatched. Those watching at home never get to see the action, but even the noise from the crowd is enough to raise a chuckle.

Of course, we are not condoning those who do interrupt sporting events in such a manner, and this does seem to be somewhat of a dying art. You rarely see it anymore, especially those who choose to bare all in the name of craic.

Not all streakers are created equal.

Some go all out, coming onto the pitch as naked as the day there were born. Others choose to sport some sort of novelty undergarment, which is actually even funnier. Some even streak for the greater good.

We have had a look through the Sportsfile archives to reflect on the bizarre relationship between sport and streakers in this country. It is a hell of a journey.

After looking at way more photos than we care to admit, we have come up with what we think makes the perfect Irish sporting streaker.

A classic of the genre: the cheeky finger wave 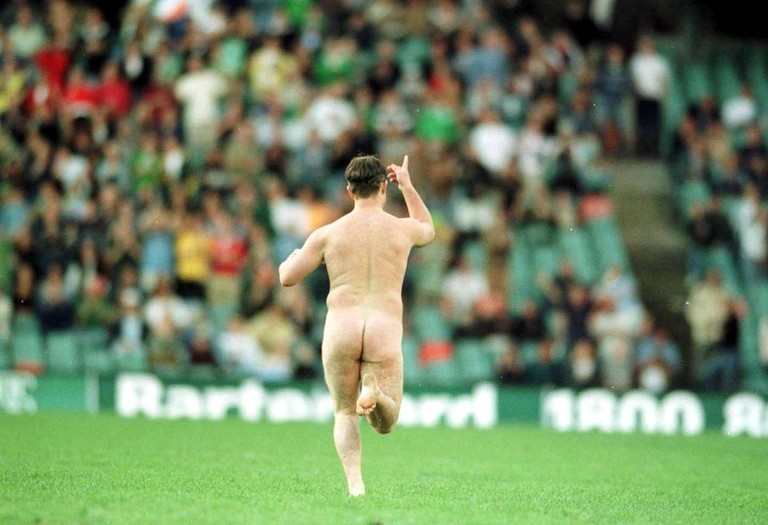 Once the kit comes off, you have very little at your disposal to add a bit of flair to your streak. The finger wave is probably your best option.

This lad pulled it off to perfection during a game between New South Wales and Ireland back in 1999.

Of course, being a streaker isn't a cross that many are willing to bear

Someone at the AIL game between Shannon and St Mary's College in 200 took that phrase a bit too literally.

Preparation and planning is vital 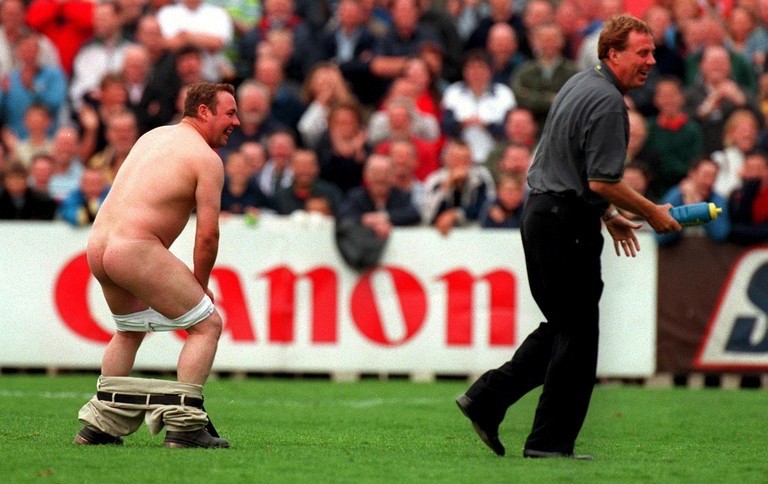 You have to decide if you're going full monty early doors and you can't change your mind halfway through.

This St. Pat's fan tried to strip his bottom half mid-streak and it left him defenceless against the spray of water from Harry Redknapp. Amateur hour.

It's all about the footwear 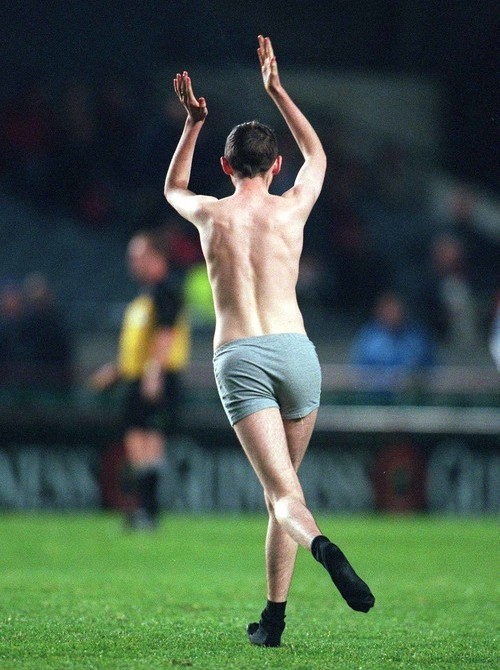 Either leave the shoes on or go barefoot. Not only will the socks lack grip, they also make you look ridiculous.

If the players are into it, it makes the whole thing so much better 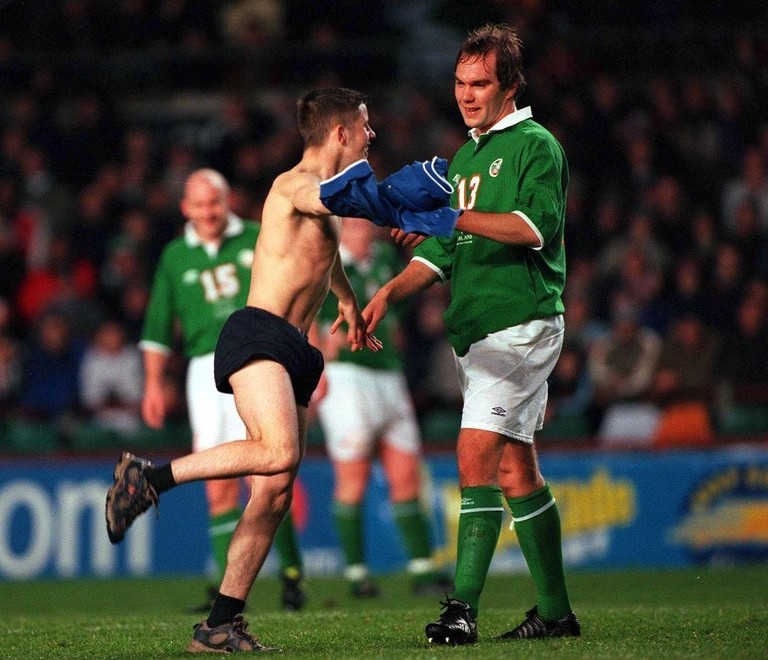 That's why you have to pick the occasion carefully. Nobody wants to be interrupted in the middle of an important game, especially by some eejit with no clothes on.

However, the players can enjoy it as much as anyone at times. The lad above chose a friendly between Ireland and Finland back in 2000 as his game, and both Jason McAteer and Lee Carsley seemed to get a kick out of it.

Be sensible, if you're not you can do serious damage to yourself 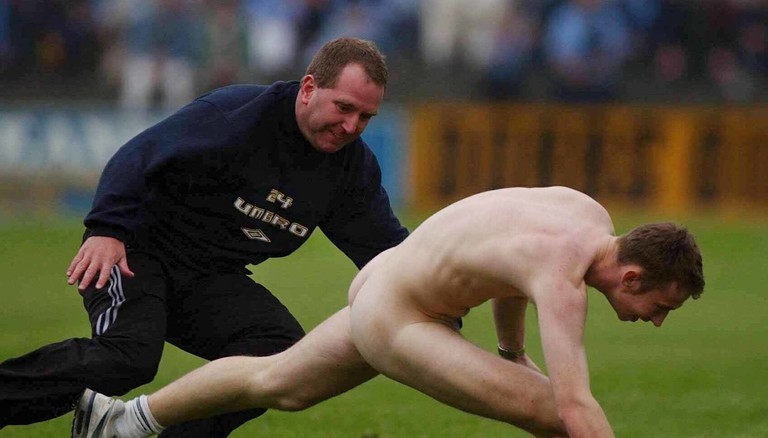 The streaker above is skirting a dangerous line.

Also, keep an eye out for potential farmer's tan 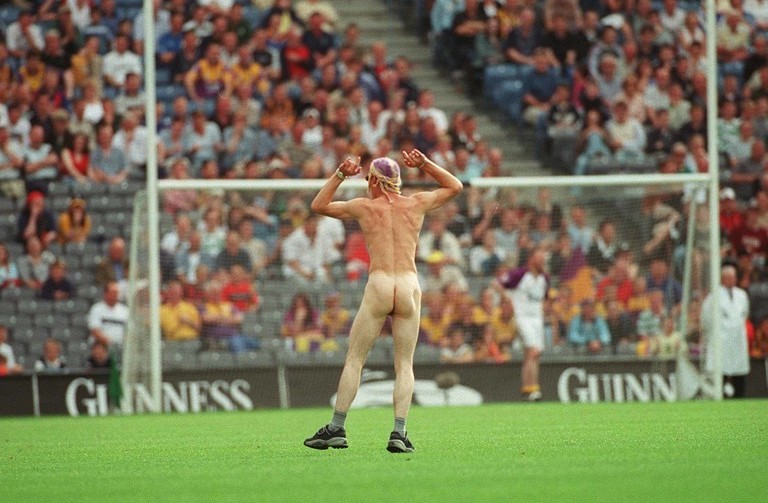 You don't want to look silly while you're making a fool of yourself.

This sort of thing we definitely don't condone 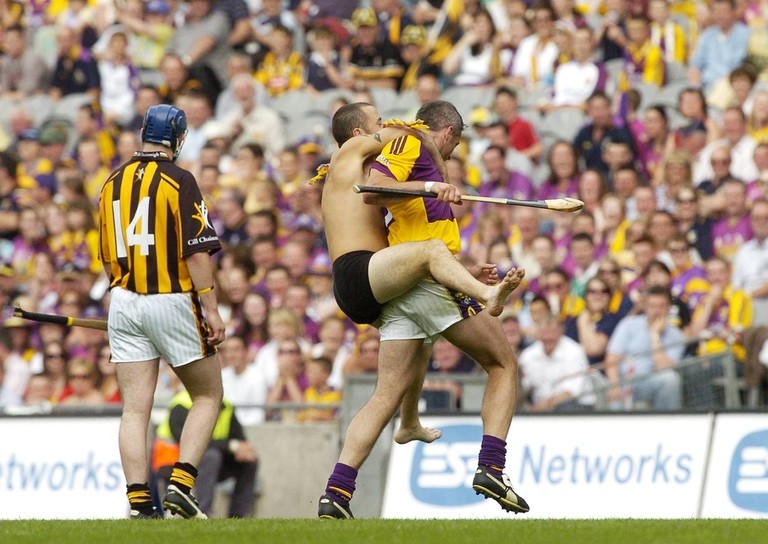 At least he had the decency to keep his underpants on. It's all about the little battles.

If at all possible, use your time in the limelight to promote some worthy causes 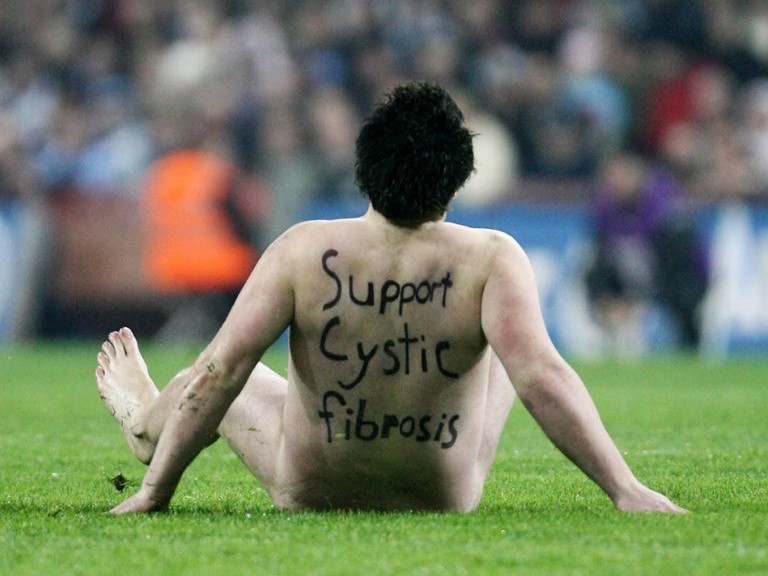 At least then you're doing it for all the right reasons.

And most importantly, don't be afraid to add a little razzmatazz 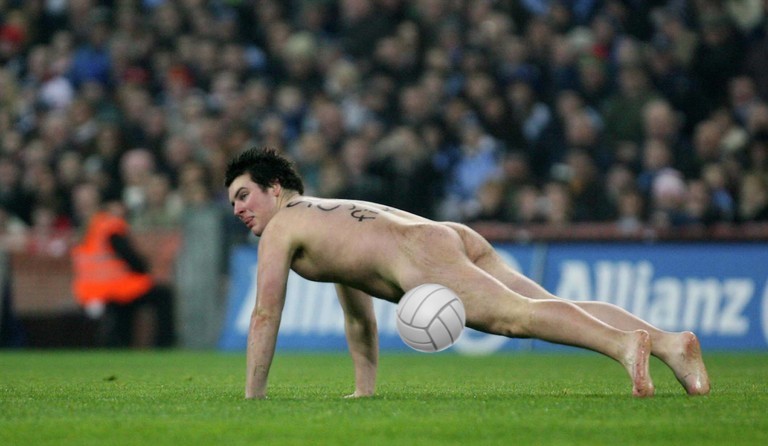 It's all about entertaining the masses.

SEE ALSO: Alan Shearer Has A Classic Roy Keane Story For Match Of The Day's Return

The Rewind
3 weeks ago
By Balls Team
Study: 66% Of Irish Men Drinking To Get Through The Lockdown
10

The Rewind
3 weeks ago
By Balls Team
Study: 66% Of Irish Men Drinking To Get Through The Lockdown
Irish Life
1 month ago
By PJ Browne
7 Of The Best Irish Sports Star Leaving Cert Stories
Irish Life
1 month ago
By Balls Team
5 Of The Hottest Days In The History Of Irish Sport
Popular on Balls
Football
23 hours ago
By Gary Connaughton
Stephen Kenny Gives Selection Hints About Fringe Members Of Irish Squad
3

Football
22 hours ago
By PJ Browne
'I’ve Always Thought He Was Talented. He Has Electric Pace'
2