The Best Quotes From Conor McGregor's Brilliant Interview With Esquire

Conor McGregor has been absolutely everywhere in the last month. The Notorious Dubliner was jetted all over the World as part of the UFC 189 World Tour where himself and Jose Aldo exchanged words and other noises at each other to the delight of the UFC fans, and the media promotion for this huge featherweight title fight shows no signs of slowing down. 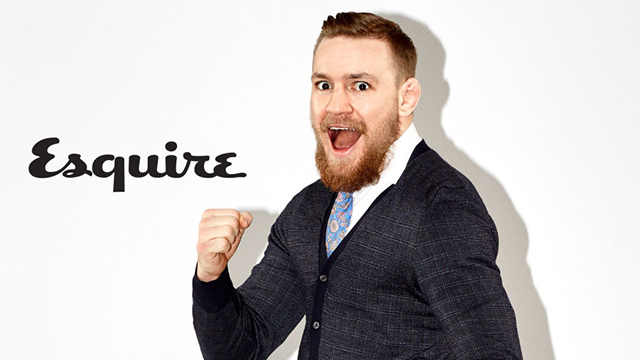 The latest media outlet to talk to Conor McGregor is World famous men's magazine 'Esquire' who published a brilliant interview that offers a view into McGregor's head in more detail than any other interview that comes to mind.

With such access to Conor, the interview was always going to be packed with memorable quotes, but we didn't expect just how many there would be. That is why we felt it necessary to compile the best quotes we found from the feature.

On the rear-naked choke submission:

It's the most dominant submission. You can do nothing to me, but I can do whatever the fuck I want to you. I have complete control.

On his big arse:

That ate me alive. After that, I said I was going to fight to the death. You're going to have to kill me.

On why he doesn't use equipment to work out:

Machines don't use machines, and I am a machine.

On the idea of rituals or superstitions:

Ritual is another word for fear, manifested in a different way.

On the thought of death:

Even in death, they say your vision, you can see everything. It's almost like you're evolving to the next stage. It's like a different plane of existence, just another form of movement, now we're moving through the fucking universe or I don't know what the fuck. Think of what's out there.

On why he started MMA:

I seem to have a face—I seem to attract attention somehow. For some reason, people want to try to come at me. They want to hit me. I just wanted people to leave me alone, basically. I didn't get into this to be somebody. I got into it to feel comfortable in uncomfortable situations.

Trash talk? Smack talk? This is an American term that makes me laugh. I simply speak the truth. I'm an Irish man. We don't give a fuck about feelings. We'll tell you the truth. People ask me a question about somebody, I tell them the truth. I don't have anything bad to say about Jose Aldo. It's pretty plain and simple. His time is up. It's done. There's somebody ruthless coming to get him. There's somebody cold coming to get him. I can look at him dead in the eye and say, It's done. You're over now. You're a champion that nobody gave a fuck about. Nobody cared about him before I came along. Nobody cared about the division before I came along. He's a decision machine. He can barely finish his dinner, never mind his opponent. And he's fought bums. He's fought little small bantamweights and he still can't put them away. Now he's coming in against a monster of a featherweight who hits like a truck. It's over for him. I don't need to say jackshit else. July is a wrap. It's inevitable.

We're the only animal that wakes up and doesn't stretch. Wake up and stretch. Start there.

These are what stood out to us on first reading of this excellent article, be sure to check out the whole thing here, as it really does a fantastic job of displaying what a unique individual Conor McGregor is.

See also: Pics: Conor McGregor’s Only Gone And Got Another Animal Tattooed On His Chest

See also: MMA Guru Gives A Perfect Example Of Why Conor McGregor’s Mentality Is A Cut Above The Rest