Opinion: The Mask Slips As Conor McGregor Performs Without An Audience

Once upon a time, when his popularity was a new-found thing, Bob Dylan met the demands of public approval with occasional alacrity. Predisposed to offer little by way of easy answers; happy or angry, belligerent or forthcoming, encounters with Dylan invariably led to this enigmatic figure being gifted control of the room.

Throughout the early to mid-1960s, his was a voice to be heard. With the protest songs that would come to overshadow much of his later, finer work, Dylan appeared in possession of a worldly awareness that elevated him above the madness of a turbulent social climate.

He seemed to have answers, and, if you asked the right questions perhaps he'd let you in on his secrets.

The writer and performer of protest songs who yet could never be found at a political rally, Dylan, like his '60s counterpart Muhammad Ali, became "the onliest singer in history people asked questions like a senator."

Consult his memoir Chronicles, and it appears a reality that hasn't overly bothered him; "I'd come from a long ways off and had started from a long ways down. But now destiny was about to manifest itself. I felt like it was looking right at me and nobody else." 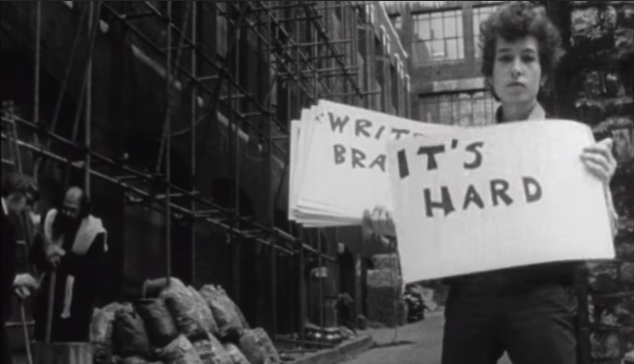 One wonders when Conor McGregor came to a similar conclusion about his own manifest destiny?

Strolling into last night's pre-fight press conference ahead of UFC 229, the Irish fighter wasn't so much gifted the room, rather he proceeded to take it.

His first such media engagement for some time (promotion for 'McGregor vs Mayweather' notwithstanding), he hadn't had to publicly endorse a comparatively serious bout in around two years.

Yet, displaying the kind of muscle memory many fight fans will undoubtedly hope he retains upon actually entering the octagon next month, all the usual braggadocio was found to be in perfect working order.

Intermittently plugging this new brand of whiskey seemingly primed to challenge Jameson's near 250-year stranglehold, McGregor's doubts regarding the validity of his latest opponent brought him to question everything from the loyalty Khabib Nurmagomedov afforded Russian president Vladimir Putin, to the "smell of shite" coming from the fighter's father.

Tailored to target the potential soft spots of the opponent in question, the verbal abuse otherwise played out as one would have expected. Had there been a show to steal, McGregor displayed all the expertise of a winning 'call and response' formula down cold.

Problematically, the skills he has honed for such occasions were largely redundant in the austere surroundings of New York's Radio City Music Hall, however.

Alongside Khabib, Dana White and a pack of gathered journalists, it was little wonder that McGregor's opening outburst concerned the notable absence of any fans.

If I was an owner, and I was part of the promotion, I would have had our fucking fans in this arena. Where's the fucking fans at? That's who we fight for, that's who pay the bills, that's who deserves this show, bringing me all over the world and we're just fucking sitting here ... You wanted a war, let's get a war going!

Behind any number of keyboards, shouts undoubtedly went up; but what's the use of calling out if there is no-one there to respond?

Whatever of the means by which he gets there, McGregor's aim for Friday night's performance shares much in common with Dylan's public appearances during his own heyday.

In the hunt for publicity, both men simply offered alternative ways of acquiring it. Asked during a 1965 televised interview what label he would choose to describe himself, and the role he believed he played in popular society, Dylan's answer was telling.

"Well, I’d sort of label myself as “well under thirty.” And my role is to just, y’know, to just stay here as long as I can."

Young, relevant and determined to stay that way. Conor McGregor could surely relate.

Whereas Dylan's public utterances sought to leave the listener with further questions, Conor McGregor believes he is in possession of the answers, and is more than happy to share them.

Reiterating his own sense of where he stands within the UFC particularly, McGregor seems well and truly beyond the point where he requires any external assurances of how good he is.

In this regard, he and Dylan share yet another common trait.

Consult the relatively fewer televised or print interviews Dylan conducted during the period of his most intense fame, and you're left in little doubt that sporadic lines of apparent self-deprecation are secondary to the confidence he has in his own ability; as noted above, destiny was looking at Dylan and nobody else.

A sense of self-assurance that encouraged Dylan to persevere with his 'less is more' approach to publicity, John Peel, the famed BBC DJ spotted the flaw in such a promotional device by the time Dylan was no longer young, relevant in a 'play the greatest hits', arena tour kind of way, and in danger of slipping further still from the mainstream.

On Friday night, the daftness of McGregor's approach was evident for anyone watching. Whereas the boozy cheers of an audience hanging on his every word, waiting for their pro-Irish/anti-whatever the opponent is cue, was absent, the usual shtick appeared staid and irrelevant.

At times, it did appear that Khabib had been suitably primed to react. Yet, given that the organisers in question had taken care to carry out this process behind closed doors, one suspects that for all the hype and attention it would bring, the straight-man/mad-man  dynamic was one they were happier dealing with.

For Bob Dylan, the abyss was narrowly avoided - his resurrection hinging on the sufficient appeal of his art as he drifted into his 60s and 70s.

For Conor McGregor, it is not difficult to imagine that his brash approach will, sooner rather than later, result in a loss of the monumental kind of attention he once guaranteed.

News that he has signed a multi-fight deal with the UFC suggests they remain confident of his appeal beyond the result of this upcoming bout. As always, the hardcore fans will be desperate to see how he performs.

Yet, if Friday night's showing contained any indication of what is to come in the build up to these future fights, one senses that the repetitive nature of his 'outlandish' approach will ultimately tell.

Without a live audience to offer the occasion an illusion of uncertainty and wildness, Conor McGregor ceases to be entertaining.