What Will Conor McGregor Do Next In The UFC?

Last night, we witnessed a truly historic night as Conor McGregor became the first ever dual-weight champion in the UFC. From day one, the SBG fighter has never shied away from his ambition to unify the lightweight and featherweight belts - as he did in Cage Warriors four years previous.  At just 28 years old, he has achieved what he set out to do.

Trying to predict McGregor’s next move is like attempting to solve a Rubik's cube in the dark.  In the public domain, he appears to act spontaneously yet behind the scenes is quite the contrary. McGregor has not garnered this position of power from irrational decisions so whichever fight he takes next will be to his benefit.

Not only does he have a belt strapped over each shoulder, he has the UFC in his palms.  While he has cited that he plans to take a brief break from fighting for family reasons, many expect to see his name on the next card to return to the Big Apple in February 2017.

It is now a matter of whom he will fight, as there are quite a few options.

Possibly the most feared fighter in the lightweight division, Khabib Nurmagomedov has firmly staked his claim for a shot at the title following a dominant display against Michael Johnson at UFC 205.

‘The Eagle’ has now extended his unbeaten run to 24 fights and was quick to call out a certain Conor McGregor when presented with the mic:

Your guy [Conor McGregor], at the beginning of the year tapped like a chicken [to Nate Diaz]. At the end of the year, he fights for the title - crazy.

Ireland only has six million people, Russia has 150 million. I want to fight your chicken! This is number one easy fight in the lightweight division.

Hypothetically, it would be McGregor’s toughest test to date due to Nurmagomedov’s phenomenal wrestling pedigree. Whether it happens or not waits to be seen but the champion certainly isn’t pushed on the idea;

“He's fought once in eight years…He doesn't fight frequently enough for my liking.  For me to commit to something like that, I'm going to need solid proof that people are going to show up and he's a consistent pull-out merchant."

Another lightweight who nobody should have any complaints about challenging for the belt in the new year. Ferguson is on a nine fight win streak - stretching back to 2013 - with his most recent win coming against former champion of the division, Rafael Dos Anjos.

Unfortunately, Ferguson and Khabib were meant to fight one another in a much anticipated match up earlier in the year before the latter received an injury. If that bout came to fruition, it would have progressed the division along significantly.

Realistically, the Ferguson - Nurmagomedov fight may still happen in order to establish a true number one contender, although Nasib would not be impressed at the prospect.

Again? Possibly. Since WME-IMG acquired the UFC for $4 billion earlier this year, the group will be eager to make even a fraction of that money back as soon as possible. What better way to do it than a fight which will guarantee a huge PPV buy rate. 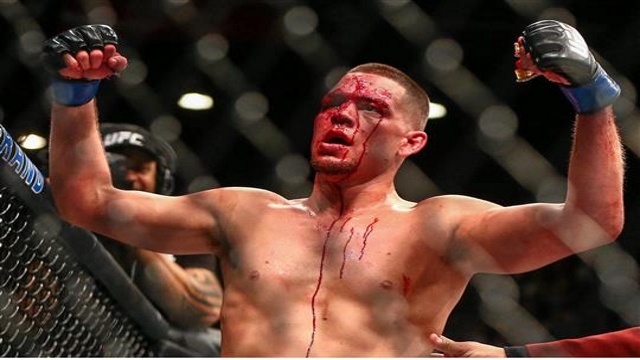 Both fighters are eager to complete the trilogy and if the money was right, it could be a real possibility in 2017. While Diaz wouldn't be there on merit, I don't think there would be too many spectators complaining after the previous fights.

All I'm saying is, don't be surprised motherfu****s.

Could McGregor possibly move to 170lbs and challenge the welterweight champion? Well, you would be foolish to rule it out if his career has taught us anything.

After all, McGregor claimed that he wants "all the belts" as he sat on the same stage as Tyron Woodley.

From that moment on things began to escalate throughout the week between the two champions as they were involved in a couple of verbal instances backstage. At the post-match press conference, Woodley fanned the flames for a possible 'super fight';

If [McGregor] wants to fight we can sign it right now. I just don't think it's a good idea for him.

He's a guy who fought at 145lb. I haven’t weighed 145lb since my sophomore year in high school.

In theory, this bout can be ruled out for the foreseeable future as Woodley is set to rematch Stephen 'Wonderboy' Thompson following their draw at UFC 205. Saying that, Dana White has been known for backtracking on his word from time to time.

Verdict: While the UFC would love to give Aldo a rematch, we see McGregor vacating his featherweight title to fight Khabib next.