Conor McGregor's next fight is expected to be announced within days and a Lightweight title fight with Eddie Alvarez is being discussed according to coach John Kavanagh.

Speaking at yesterday's BAMMA 26 press conference, Kavanagh said (via the Irish Mirror), "We’re in talks. It will be decided whether they are going to go with that fight within days."

McGregor would have a chance to become just the third two-division champion in UFC history by facing Alvarez at UFC 205. But, Kavanagh believes that McGregor will have to abandon his featherweight title if a fight with Alvarez is given the go ahead.

If the next fight is for the lightweight strap, they will take the featherweight belt off Conor. I think that’s a given. I guess, the little bit of consolation Conor will take from that is that it will be two guys he has beaten fighting for the vacant featherweight title.

Kavanagh makes an interesting point. Jose Aldo could potentially face Max Holloway which would mean that the two men competing for McGregor's belt have already been beaten by the Irishman. 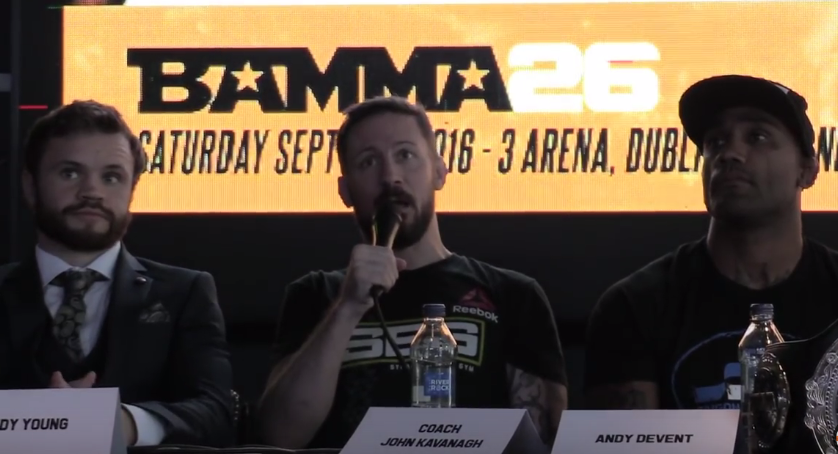 If McGregor wins the lightweight title and the featherweight title belongs to a man he has already beaten, he would have an almost immediate right to challenge for the featherweight title again.  That would fulfill a long-standing dream of McGregor's, to be a dual weight champion in the UFC. Even though many believe the cut is too much for the Crumlin native, Kavanagh believes that McGregor can still comfortably make the cut.

He’s actually walking around now a lot lighter than he would have. That’s because of a lot of things. The diet has gotten a lot stricter. George Lockhart is onboard 365 days a year and Conor is following his diet to a tee.

MMA was legalised in New York in March and the UFC will be eager to sign their biggest name to what would be a flagship East coast event. UFC 205 will take place in Madison Square Garden on the 12th of November.

Recent reports suggested that a major stumbling block in negotiations was that McGregor would not agree to relinquish his featherweight strap but it could be assumed that McGregor and his team will be lining up some clause in the contract to allow McGregor an immediate challenge.

The card for UFC 205 is already shaping up to be an absolute mammoth event, with Robbie Lawlor vs Donald Cerrone and Yoel Romero vs Chris Weidman lined up for the event. Add a Lightweight title bout featuring McGregor and you're looking at a card that could break all record previously set... By Conor McGregor of course.