Conor McGregor has taken to his personal Facebook page to post a rant lashing out at those who criticise his stance on the poppy as remembrance day approaches in the UK.

It's difficult to know what set McGregor off, although rumours are flying around that someone dragged up an old picture of McGregor wearing a poppy on social media, but he certainly is not a happy camper and the general gist of his message appears to be "Fuck you" to pretty much everyone. 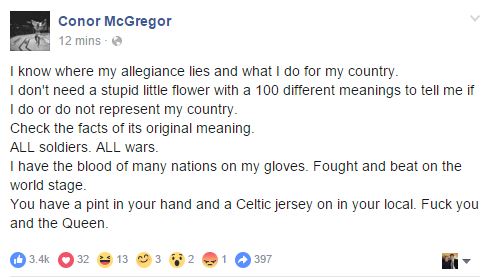 One thing we know for absolute certain is that Conor McGregor is in full control of his own social media accounts, because you can be damn sure he wasn't advised to post this.

UPDATE: It appears that this may have been what set McGregor off: 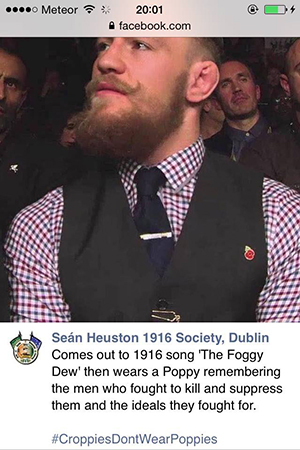 MMA
3 months ago
By PJ Browne
'With The Right Performance, The UFC Call Could Be A Lot Closer Than People Think'
Previous Next

MMA
1 month ago
By Balls Team
Conor McGregor Finishes Cowboy Cerrone In 40 Seconds
MMA
1 month ago
By Maurice Brosnan
Sinn Féin Suspend Paddy Holohan Over 'Offensive' Comments
MMA
3 months ago
By PJ Browne
'With The Right Performance, The UFC Call Could Be A Lot Closer Than People Think'
Popular on Balls
Football
13 hours ago
By Mark Farrelly
Beat The 5:15 - Get At Least 4/7 In Our Irish Sports Trivia Quiz
2