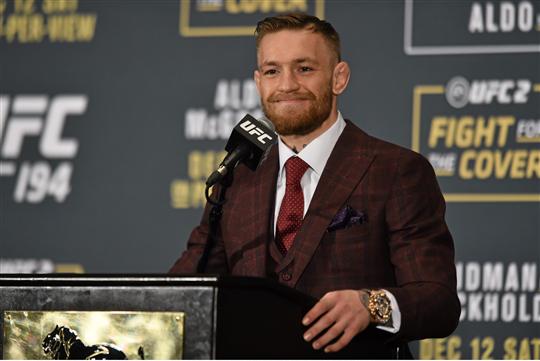 He'll never get everyone to love him but really that's part of the appeal to the rest of us. The aftermath of UFC 194 in Ireland has seen two very differing opinions. On one hand you have the outpouring of pride and delight that tends to go hand in hand with an Irish success of this magnitude. On the other you have those who would suggest quite vociferously that the UFC featherweight king does not represent Ireland or the Irish people.

If Saturday night's victory did not change that view then it's fair to say nothing will. And that's quite alright. The debate over the legitimacy of MMA has long become tedious but that debate has probably only helped McGregor mania along its way. It seems no one is lukewarm with regard to McGregor and the hate from some increases the love of others and vice versa. At the end of the day, all that means is that McGregor's bottom line keeps swelling to an extent that no other MMA star has seen.

However, even if you can't take him or his sport to heart you have to respect him for what he's done. The motor mouth routine may have got him the attention but he's had to back that up with hard work, hard work and more hard work. Going in to the fight against Aldo he still had his doubters among MMA fans. And even his own fans may have had some slight doubts remaining.

Perhaps it was a lot of hot air. Perhaps Aldo would show him up as little more than a hype machine who had faced carefully chosen opponents.

It would be fair to say that possibility has well and truly been blown out of the water. The hype just backs up the reality. He's a supremely talented martial artist who has put in the hard yards to get to where he is. Take, for example, this Facebook post from November 2013.

Two months after the win over Max Holloway, McGregor was suffering from an ACL tear but the dreams certainly weren't being put on hold.

Fast forward two years and the rhetoric has changed a little bit. Forget that 25 million in the bank, McGregor is aiming for nine figures and it would seem it wasn't too much to ask for at all.

Just a young kid from Ireland running the game. pic.twitter.com/VKy6TobIB8

See also: Biggest Night In UFC History On The Cards After Talk Of McGregor Title Defence