Conor McGregor's Official Homecoming May Not Be Happening After All

There's been an interesting dynamic at play in Dublin City Council over the past week. It all boiled down to one question, which Irish achievements deserve official recognition and which don't?

If you had said a couple of years ago that an MMA fighter would fall into that first category, the vast majority of the public would think you were simply taking the piss. Public receptions are usually reserved for returning World Cup heroes or Olympians, not some chap who likes a scrap.

That view of MMA has changed immeasurably and a lot of that has to do with John Kavanagh. While Conor McGregor's self-publication machine has certainly played its part, the technique and training behind his rise to the top have been second to none.

Kavanagh has been duly credited with that, something which, unsurprisingly, has come to a head in the aftermath of UFC 194. Everyone wants a piece of McGregor and a decent way to go about it is through his gym. As such it will come as no surprise to learn that Kavanagh has been inundated with requests over the past week.

The SBG coach has posted a rather entertaining Facebook message in an attempt to answer some of these questions and perhaps the most interesting thing to come of it is Kavanagh's belief that the much talked about civic reception is far from a certainty now that the Lord Mayor has confirmed that reception would go ahead.

If the 'civic' reception is happening, which I dont think will as we just want a return to regular training, then it'll be advertised well in advance.

Whether that amounts to McGregor politely declining the offer of a reception is debatable but if the event is to go ahead it would seem that the featherweight champ and his team have yet to be convinced.

Elsewhere in Kavanagh's response, we learned that he's sick of getting people's pictures of McGregor while, perhaps most importantly of all, his wrist is 100%, dispelling any fears that he may be facing a six month suspension. 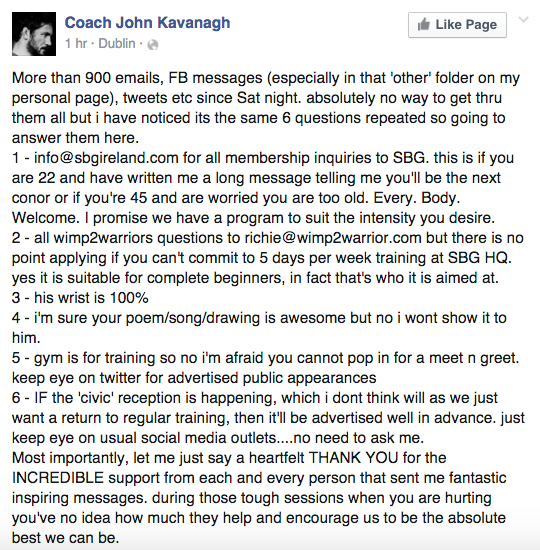 While the civic reception news is certainly something to talk about, Kavanagh final sentence there is certainly worth highlighting. Whether or not you're a fan of MMA and McGregor, the SBG team have managed to do something very special over the past few years and it's only right they're getting the support they deserve from the Irish fans.

See also: RTÉ Take Montages To Next Level With McGregor's Person Of The Year Promo