When the name Dean Barry is mentioned to casual MMA fans, there might not be much familiarity.

A professional record of 4-1 is usually a sign of a prospect or young gun who's climbing the ranks of mixed martial arts. That's not the case here. Barry has signed a multi-fight deal with the UFC and it's the culmination of a long journey stemmed from a background in kickboxing.

Having been a former World Association of Kickboxing champion and trained under the likes of Raymond Daniels in the U.S. - the Tallaght native knows it's been a long road to the pinnacle of MMA competition. But he doesn't hold any grudges towards anyone that doesn't know him.

"A lot of people kind of get it confused. They think you must be somebody with ten fights, twelve fights, fifteen fights to get called up to the UFC. There's so many people on the roster who have signed who are 2-0, 1-0. People 0-0, 3-0, people with four fights. The times have changed in MMA."

Point fighting was where it all started for Barry who comes from a family of kickboxing origin. His brothers have also competed in WAKO tournaments and it's all he knew since he started training at the age of ten. For the MMA enthused, the likes of Michael Venom Page and Stephen 'Wonderboy' Thompson have similar backgrounds.

"Point fighting is basically like - it's like karate kickboxing. It's all about the speed, timing and precision. You hit first, who gets the first score, who makes the first mistake and things like that. It's a very very technical game of inches. That's what developed my fighting IQ because it's such a thinking man's game.

What a finish by Dean Barry #MMA #knockout pic.twitter.com/ASOPsKwDT5

Barry talked about how it allowed him to pick up things quickly in MMA and how his coaches remarked on his adaptability. Before he started his MMA journey professionally, few will know that he was drafted into training camps by some of the sports greatest because of his unique fighting style.

"I helped (Georges St-Pierre) train for the Michael Bisping fight. He was a big lover of the sport karate, the point fighting and stuff like that. That kind of 'hit don't get hit' movement because he trained a lot with Wonderboy. We just linked up together and he just really liked my style, my attitude, I was just dying to learn. We just became really good friends. He was kind of like a big brother for me."

The Dubliner's first MMA fight was under the Tristar banner and he recalled going broke from his time in Canada to allow himself to train on a full-time basis. His decision to train abroad was part of a journey to create his own path given a lot was happening in Irish MMA at the time. Learning under the likes of GSP had a profound effect on him.

"(GSP's) attitude, his kindness and humbleness, that's what I want to be. I think you should look up to people like him. I did and just being around him I saw how kind-hearted he was to people less fortunate than him, even people on the street coming up to him. Just humble and loving, taking everyone for dinner and giving people stuff all the time."

Now with a bout scheduled for April, it's been nothing short of a rollercoaster few years for Barry. He's had multiple fights cancelled and suffered injuries on the way. He was originally signed by the UFC in 2020 but never got to make his debut. A win in Titan FC in December opened up the door for another chance to make his big debut.

However, his fight before that was when the UFC came calling. He had been supposed to fight on Titan FC beforehand, a UFC subsidiary, but that bout was cancelled. He then decided to take a fight in the UAE on short notice when he was working an office job in Dublin. At that stage - he had given up training and didn't know what was next for him in MMA.

"(2020) was just a bit of a mad year for me. I wasn't getting fights. I was scheduled to fight at the start of that year and I lost my grandmother. I almost went into this depressive rut. I didn't want to do nothing with my life. I gained a lot, a lot of weight. I was very heavy and I wasn't training. I had a baby on the way."

"I'd actually stopped MMA for the summer and then I just woke up and I said I need to do this for my son. If I want to give my son a good life and spend time with him, sitting here in an office isn't going to do that. I rang my manager and just said please get me a fight. He got one for me, I think I had like six weeks to get ready for it."

His opponent, Abdulla Al Bousheiri, was much heavier than Barry's usual weight class and provided a few obstacles in the build-up. They had originally set a lightweight limit (155 pounds) but Al Bousheiri could only drop to 163. Then Barry and his team had signed on to the fight thinking he was 2-2, when in fact he was 7-1.

"He was huge, that was a scary fight. He was just like the terminator. I just went over and I knew - this is one fight to show what I can do. I did it and I had only left the cage and I had twenty missed calls from the manager. He said (the UFC) just said they love you, they want to take you and I kind of knew I was going then. It was a nice story."

Nowadays there are much fewer Irish names on the UFC roster. Ian Garry has shown that there's a bright future for the Irish in the UFC with his debut late last year. Conor McGregor remains in the fold but hasn't fought since breaking his tibia last summer. Barry says some people reckon he has ties to Conor, but it couldn't be further from the truth.

"I've never met Conor. Never spoke to Conor in my life, I was never in the same room as him. A lot of people were tweeting and writing, 'Aw Conor's friend got in.' 'Aw look, another favour for Conor.' I was like, buddy, I'd love to meet Conor. I've never met him."

When it comes to the 'Fighting Irish' - many in Barry's position have decided to sign with Bellator due to the cards they showcase in the 3Arena. It seems to be a valuable proving ground for homegrown talent and certainly one willing to give younger Irish fighters an opportunity. Barry says he's not an MMA enthusiast, but he does support his own.

"I wouldn't say I'm a massive MMA fan. But I'm a massive fan of supporting my own, other Irish athletes. Any sport I'll support the Irish. My last fight there, after I weighed in, I quickly ran back to my room because there was Cage Warriors on, there was Bellator on. I wanted to make sure I watched every single one of them."

I originally spoke to Dean Barry in the Spring of last year. Since then - he's had three more cancelled bouts, bringing the total to seven over the course throughout his professional career and that's only the ones that were confirmed. It's been another year of stumbling blocks towards a UFC debut. Last year I asked him where he'd like to be three years after his debut:

"I'd love to be a world champion. I have everything set out what I want to do. Within the next year, I want to break the top fifteen. That's going to be banking on putting on great performances. Where do I see myself in three years? Hopefully, a world champion, setting my family up and taking care of my family. That's the main thing. Just being happy and giving back." 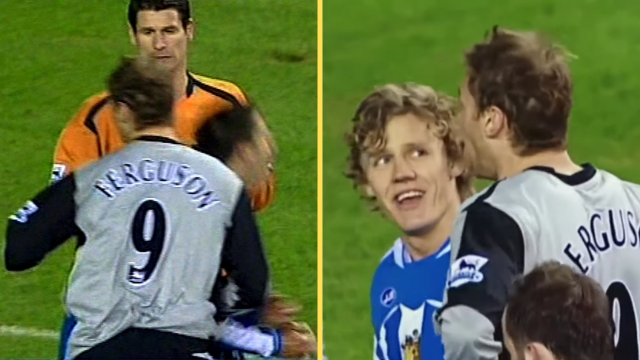