The fallout from UFC 229 continues with Khabib Nurmagomedov's manager Ali Abdelaziz targeting John Kavanagh for a tweeted exchange between the Irishman and Khabib two years ago.

Speaking out yesterday, Kavanagh launched a defence of Dillon Danis; a teammate of Conor McGregor's who has been accused of directing "an anti-Muslim slur" at Khabib in the wake of his victory on Saturday night.

Referring to McGregor's "bitch ass coach," Abdelaziz drew attention to a series of tweets exchanged between Kavanagh and Khabib in 2016 that appear to tread on similarly shaky ground.

This is fact his bitch ass coach start playing making fun of religion first and now he want to be humble fuck him. In America everyone is equal bitch https://t.co/eb1tDEhU0X

This led to an open and frank exchange between both figures. 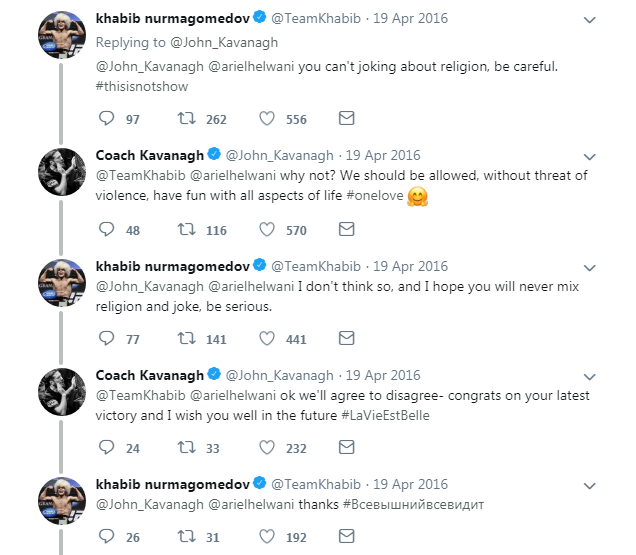 After initially being reprimanded by Khabib for questioning the practices of the fighter's religion, Kavanagh is warned to "be careful."

As he has similarly repeated in recent days, Khabib was keen to differentiate between what occurs within the professional climate of the UFC, and his personal faith.

"I hope you will never mix religion and joke, be serious."

Intriguingly, the two did finish off this brief conversation on a relatively positive note. Suggesting that they will "agree to disagree," Kavanagh congratulated Khabib on his latest victory (most likely vs Darrell Horcher).

Signing off the exchange in a manner that seems contradictory to the inflammatory remarks of Khabib's manager, the Dagestani fighter thanked Kavanagh.

See Also: Watch: Ariel Helwani On What Happens Next For McGregor And Khabib