It was set to be Leah McCourt's toughest test of her MMA career, but she passed with flying colours.

The 28-year-old Down native came out of Bellator 259 with a submission victory over #6 ranked Janay Harding.

It was McCourt's first fight on U.S. soil, and a step further towards climbing up the Bellator Featherweight rankings.

The first round was spent mostly against the cage, as McCourt smothered her opponent with knees and punches before landing a takedown.

Leah McCourt moves to a perfect 4-0 in @BellatorMMA with a second round submission of Janay Harding via a triangle choke.

That will move her up the featherweight rankings. Who should she fight next?

After ending up in side control, the fight found itself up against the cage again, with Harding in the offense this time around.

McCourt reversed with her back to the cage and landed another takedown, before the second round started where more grappling ensued.

With less than four minutes left in the second round, McCourt ate a barrage of punches and kicks from Harding on the feet and on the ground.

As Harding was landing from top position, McCourt landed a sweet upkick which wobbled her opponent, leaving her open to lock in a triangle submission.

McCourt tightened the hold as time went on, before Harding tapped to grant her the win in a turnaround victory.

😱 What a comeback!@LeahMcCourtMMA gets the submission victory over Janay Harding! #Bellator259 #MMA pic.twitter.com/ixTfRmMT3i

"Janay is a very technical striker", she said after the fight, "she's been in deep waters with a lot of people so I knew it would be a tough fight."

Big John McCarthy was in the cage and asked her about the upkick and the submission. "I seen her wobble, yeah. I didn't think it was on, the choke, then I was like, let's put it on properly."

The 28-year-old missed weight before the fight, coming in at 3.4 pounds over the Featherweight limit.

Here's the Leah McCourt interview for everyone in Ireland that missed it. #Bellator259 pic.twitter.com/URg88G24JC

It was her first fight since headlining Bellator Dublin in February of 2020, where she won a unanimous decision over Judith Ruis.

In the main event, Bellator Women's Featherweight champion Cris Cyborg was victorious in fifth round TKO win over Leslie Smith.

After gaining another win for her record, McCourt will be close to fighting for a title in the near future.

After the fight, she was asked who she wanted to face next. "Anybody, I don't care, I just love fighting and I love improving, anybody, all the girls in the division are top girls so every fight would be a challenge. "

You can watch the full fight here, with Leah's fight coverage starting around the 59 minute mark:

See Also: Manny Pacquiao To Return To The Ring Against Errol Spence Jr 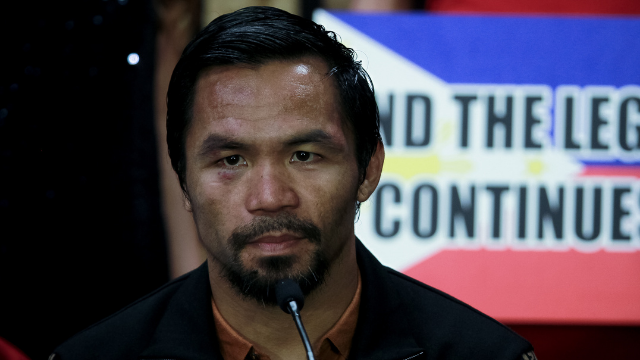