Dubliner Ian Garry had a dream debut on Saturday night at UFC 268. You couldn't wish for better than a knockout at Madison Square Garden in New York.

The former Cage Warriors champion landed an impressive straight-hand knock down of Jordan Williams as the seconds drew to a close in Round 1.

Despite the dominance in his finish, it didn't exactly paint the picture of the minutes before. Williams managed to cause Garry some problems on the feet in the build up.

Garry spoke on Monday with Ariel Helwani on MMA's biggest live show, The MMA Hour. He described the overwhelming feeling that played a factor in the fight.

"It was overwhelming, in a sense of, just kind of everything just hit me at the one time," Garry said. "We walked out, everything was fine."

"It wasn't until I got into the cage and I'm stood there and Bruce Buffer is just about to announce the fight. And I look left, and I see .. 'UFC 268' and it just has my name in big writing."

"It was at that moment then, I was just like, 'wow'. I wasn't nervous, nerves was the wrong word to use in the cage with Joe (Rogan). It was a sensation of .. overwhelming."

Garry then spoke about how his opponent, Williams, who changed up his stance to previous fights threw the Irishman off a bit as the first round developed.

"It took me awhile to get used to it. Yeah, I got caught a couple of times but at the end of the day, he got slept," he told Helwani.

"In fighting sometimes you have to take one or two to give a few back."

Garry On The Takeover Part Two

Clips of Garry's post-fight interview have done the rounds on social media. Helwani asked him about the aftermath and how it felt to win in his debut UFC fight.

"It's euphoric," the Dubliner said. "I went over to DC, John and Joe. And just 'aaaah'. I didn't say a single thing to them, I just looked at them and shook my head. They were all laughing and smiling back at me."

"At the end of the day I said first round knockout. I don't force something, I'm not looking for a finish. It will come when it comes."

In Garry's post-fight chat with commentator Joe Rogan, he cited the 'takeover' part-two, a homage to the Conor McGregor at UFC Dublin in 2014.

"It was something I had just thought about," Garry said. "None of that was planned, that was all me speaking in that moment and it came out."

"I really do feel like it's the takeover part two."

The Reaction At Home

Garry said it was 'like a dream come true' to get personalised voice messages from Conor McGregor over on his Twitter account, giving him advice after the fight.

"It was special. I really took it to heart. Even the fact he was trying to coach and trying to help me," Garry said on The MMA Hour.

The reaction at home was undoubtedly something Garry had never witnessed before. The Irishman spoke about receiving text messages and calls of support.

"Before the fight, I got a message, from a friend of mine who I don't speak to that much .. our paths don't cross. He's doing really well for himself in an Irish sport, he plays for the Dublin team."

"When we were kids 4,5,6 years of age. We played gaelic football on a pitch in a park, and the pitch was called pitch 9. He sent me a message like, 'From pitch 9 to MSG, everything's going well', and I just thought 'holy shit'."

When is he back in the Octagon? He told Ariel Helwani it's unlikely to be this year, as he hopes to return home and spend time with family over Christmas.

He reckons it'll be April or May next year - as he continues to train out in Florida in Sanford MMA under coach Henri Hooft. 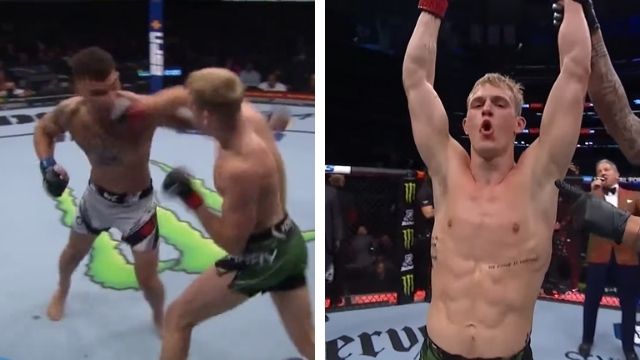