What time is McGregor vs Alvarez you ask? Well, Balls.ie has all the relevant information as Conor McGregor aims to become the first ever UFC dual-weight champion at UFC 205.

The Ultimate Fighting Championship is due to host its first ever=event in New York on November 12th. There is no finer venue in the world to host such a historic night than Madison Square Garden.

Conor McGregor vs Eddie Alvarez may go down as one of the truly great bouts to feature at the Garden - along with  Muhammad Ali vs Joe Frazier, Jake LaMotta vs Sugar Ray Robinson and countless others.  It's synonymous with fighting culture yet - due to legislation - it has taken quite some time for the UFC to make it to the 'Big Apple'.

Conor McGregor will look to achieve the improbable in becoming a two-weight champion by defeating Eddie Alvarez who has only lost once in his past seven outings. McGregor has to prevent Alvarez from taking him down as comfortably as Chad Mendes did, if he is to walk away from the cage with two belts over his shoulders.

While Alvarez may be guilty of underestimating his opponent:

"To me, he's just a left hand. He's just a guy with a left hand...This is a move that's very easily taken away and we're going to dominate every step of the way." 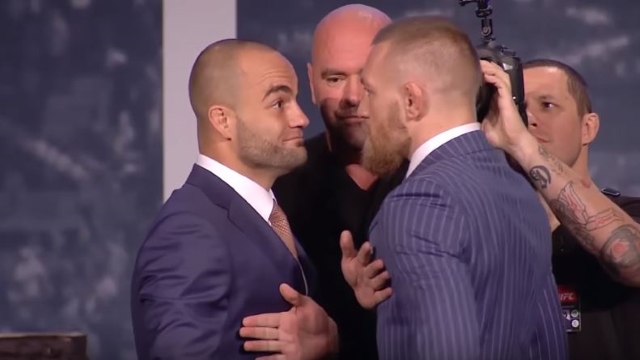 What Time Is McGregor Vs Alvarez

UFC 205 will air on both eir Sport and BT sport with coverage starting on the latter at 11pm Dublin time.  Due to the fact that there are three title fights on the main card, it's difficult to pinpoint exactly when the main event will take place.  However, McGregor will more than likely enter the arena sometime after 5:30 am Dublin time.

For those wanting to view the preliminary card, it will be available on UFC's fight pass which costs from €5.99 per month.