Next Year's F1 Calendar Exposes The Real Priorities Of The Sport

The 2022 F1 calendar has been released, to much fanfare and celebration from the sport's social media accounts and promoters. The 2022 season will be the longest in the sport's history, with 23 races squeezed in to the eight months between March 20 and November 20.

Though the sport's promoters may be licking their lips at the prospects of 23 races worth of television and advertising revenue, the fact is that the 2022 calendar presents more uncomfortable questions than reasons for excitement.

The F1 calendar has not been the same Eurocentric beast of old for quite some time now. The addition of a race in Malaysia in 1999 marked a shift towards more races in the far east, and that has expanded further to central Asia in recent years.

The calendar has been expanding for years, with less of a focus on the sport's identity and history, and more of a spotlight on the glitz, glamour, and - most importantly - money that locations like Singapore and Abu Dhabi can offer.

That's not to say some of the new tracks have not been entertaining additions. The Sakhir International Circuit in Bahrain is one of the best tracks on the calendar, and the Azerbaijan Grand Prix in Baku is consistently bonkers and wildly entertaining.

But when you consider what many of these countries stand for, it becomes harder and harder to justify these "exotic" locations. The Bahrain Grand Prix was cancelled in 2011 because of civil unrest, while the issues with Azerbaijan as a location for major sporting events have been well documented.

Of the 20 countries on the Formula 1 roster for next year, homosexuality is criminalised in some form in four. Despite the furore around Saudi Arabia's takeover of Newcastle, their first hosting of an F1 Grand Prix next month has gone under the radar. Homosexuality is punishable by death in the country, on top of countless other human rights abuses.

That's not to mention the sport joining MotoGP in visiting Qatar. Though the 2022 calendar doesn't include the middle eastern country, F1 will hold a Grand Prix there next month, before starting a 10-year contract with the Losail Circuit in 2023.

Similarly to Saudi Arabia, homosexuality is punishable by death in the country. The human rights abuses on building sites for the 2022 World Cup in Qatar are well-documented, and the fact that Formula 1 has been added to the list of major sporting events visiting the country is a sad reminder of where major sporting bodies' priorities lie.

Formula 1's "We Race As One" campaign began in 2020, amid the Black Lives Matter protests across the world. The campaign aims to push for equality and better access for people from all backgrounds to the sport. When you visit places like Saudi Arabia and Qatar, you waive the right to present yourselves as protectors of equality.

🏎️ @F1 champion Sebastian Vettel was reprimanded for not removing a 'Same Love' t-shirt in support of LGBT+ rights ahead of the national anthem at the #HungarianGP on Sunday. @LewisHamilton had also spoken up against Hungary's anti-LGBT+ legislation ahead of the Grand Prix 🏆 pic.twitter.com/2n5B78WLBo

Four-time world champion Sebastian Vettel said as much in an interview with The Race earlier this week, where he discussed his recent LGBTQ+ activism. The German driver was pictured ahead of July's Grand Prix in Hungary - a country similarly hostile towards the LGBTQ+ community - in a rainbow t-shirt, and spoke about his discomfort at visiting such countries.

There are certain topics too big to neglect. We all agree – and it doesn’t matter where you come from – that it’s only fair to treat people equally.

There are certain countries I think are no-go. We go to some of those places and roll out a red carpet with nice messages on it. I think it takes more than just words, I think it takes actions.

I feel our sport could apply a lot of pressure and could be of immense help to spread that fairness around the globe even more.

The FIA and Liberty Media, who have put together the biggest and ugliest calendar in Formula 1 history, clearly aren't prepared to put their money where their mouth is.

Countless tracks in countries without dotted histories of human rights would be ecstatic to host an F1 Grand Prix, but the money coughed up by the likes of Qatar to gain hosting rights is simply irresistible, it would appear.

That's not all, either.

In 2018, Formula tried a first ever "triple header", which saw the French, Austrian, and British Grands Prix completed on successive weekends. It was widely accepted at the time that it was an unacceptable demand on engineers and trackside staff, who were expected to work 12-14 hour shifts and go up to three weeks without seeing their families.

Team bosses such as Mercedes' Toto Wolff were among those who spoke up about the strains on teams back then - yet the 2022 calendar will take in three triple-headers. The focus of the TV cameras will be on the likes of Lewis Hamilton and Max Verstappen on track but, for those working behind the scenes, it will be a terribly challenging schedule.

23 races alone is a huge demand on staff. When you throw in filming days, and testing, they will likely be travelling to and working at races for over half of the weeks in 2022. Throwing in two triple headers into the calendar is a clear message that the sport's leaders are not concerned about the wellbeing of the engineers who make the competition possible.

That's not to mention the issues with climate change that rise from the structure of the calendar. Formula 1 is hardly the most climate-conscious sport but, credit where it's due, the teams and governing bodies have agreed to use biofuels by 2025 and to be fully carbon neutral by 2030.

I love #F1 travel logic of going from Italy to the United States to Spain, having an Azerbaijan and Canada back-to-back while Russia leads a back-to-back-to-back with Singapore and Japan following. I realize the rush to end before the World Cup begins, but it could be better.

When you see a calendar that involves a trek across the Atlantic from Baku to Montreal in back-to-back races, or a season opener that moves from the middle east to Australia and then back to mainland Europe, it's clear that the sports organisers were once again ignoring the messages they themselves have been pedalling.

They say that money talks, and looking at the 2022 F1 calendar is a prime example. The sport was hit hard financially by the COVID-19 pandemic, and is desperately trying to make back some of the losses it made over a tough 2020.

It's just a shame that a global climate crisis and basic human rights have been disregarded in the pursuit of that. 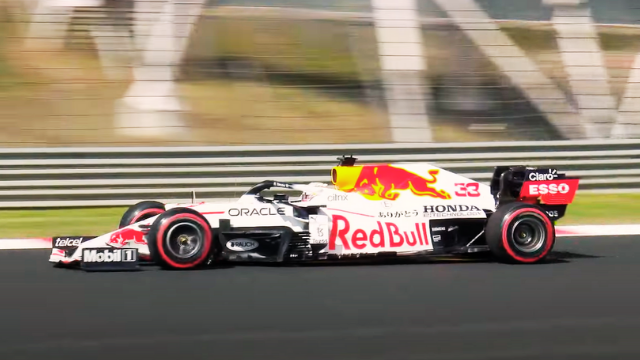