The 2003 Brazilian Grand Prix is fondly remembered by F1 fans as one of the craziest races in the sport's history - and it has a fond place in the hearts of Irish fans as well, as the last race ever won by the Jordan team.

Set up by Dubliner Eddie Jordan 30 years ago in 1991, the Jordan team were (to date) the only ever Irish team to compete in the sport and around the turn of the century they began to see great success. World champion Damon Hill won the team's first ever race at the 1998 Belgian Grand Prix, before Heinz-Harald Frentzen won two races during the 1999 season, when the team finished third in the championship.

It was an incredible time for Irish sports fans and petrol heads, to see a team eminating from Dublin competing with the likes of Ferrari, McLaren and Benetton. The team also had a knack for giving debuts to drivers who would go on to sit among the world's best - including Michael Schumacher, his brother Ralf, and Northern Irish driver Eddie Irvine.

By the 2003 season, however, Jordan had fallen down the pecking order significantly. This was the peak of Michael Schumacher and Ferrari's dominance, and new talents like Kimi Raikkonen and Fernando Alonso were emerging at McLaren and Renault. By the time the F1 circus arrived in Brazil for the 3rd race of the season, Jordan still had no points to their name for the season.

Jordan and the rest of the paddock were in for a huge surprise at the Brazilian Grand Prix. The rules were a bit nonsensical in those days and only allowed teams to bring one set of wet-weather tires for each car to each race. So, when the inevitable Sao Paulo rainstorm arrived, the race descended into utter chaos.

Home favourite Rubens Barrichello started on pole position in the Ferrari, ahead of David Coulthard and Mark Webber. Giancarlo Fisichella of Italy and Ralph Firman of Ireland were the Jordan drivers for the race and started in 8th and 16th respectively. The rain did not let up in the opening stages and turn 3 in particular became hazardous. 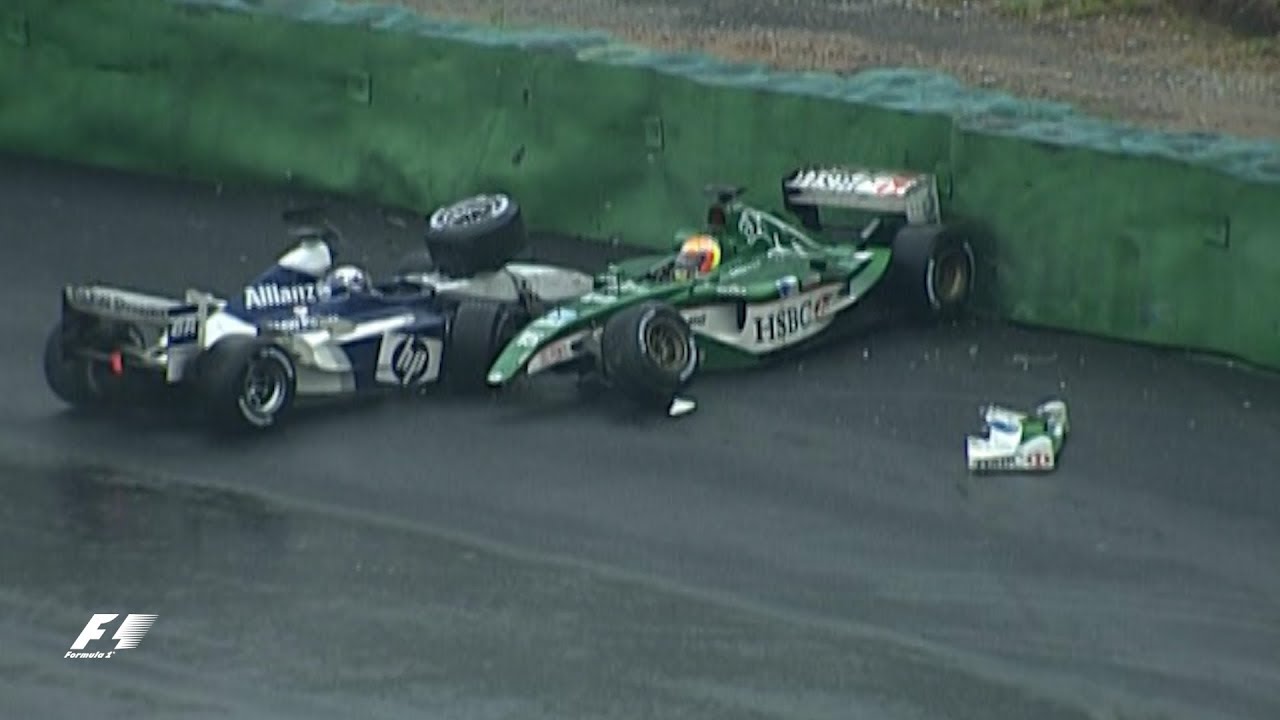 Six drivers in total spun at turn three, including defending world champion Michael Schumacher, who spun off while the marshals were recovering the cars of Juan Pablo Montoya and Antonio Pizzonia. Only a few laps before that incident, Irishman Firman had spun entering the first corner, narrowly avoiding his teammate but crashing into Olivier Panis - ending both his and Panis' race and bringing out the safety car. 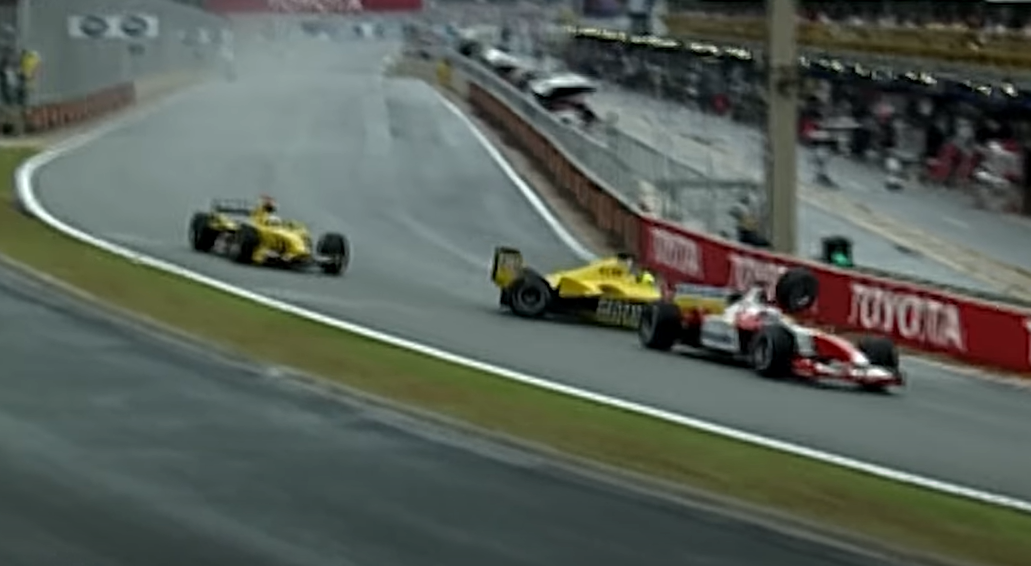 There were far too many incidents to do justice to in this piece, so a brief overview follows. Barrichello lost the lead to Coulthard on the restart, who then lost the lead to Raikkonen, who then pitted and handed the lead back to Coulthard, who then ran wide and handed the lead back to Barrichello. While all of this was going on, Webber joined the club to have been caught out at turn 3, while Alonso had to serve a penalty and dropped from fourth to ninth. There had also been four safety cars deployed by lap 40.

There was heartbreak for the home crowd on lap 47, when Barrichello's car failed and he had to retire from the lead. He had never won his home race - and he never would before retiring in 2011. David Coulthard inherited the lead, but gave it up when he pitted five laps later.

This is where the lap numbers get important and - somehow - where the race gets even more chaotic. Coulthard stopped on lap 52, meaning Raikkonen moved into the lead that lap. Fisichella in the second Jordan had made his pitstop early and so was running close behind Raikkonen in 2nd place, with Fernando Alonso in 3rd for Renault.

On lap 54, Raikkonen ran wide and allowed the Jordan of Fisichella to take the lead. Both cars were very marginal on fuel and it was likely that they would both have to pit again. However, later that lap the Jaguar of Mark Webber piled into the barriers at the final corner and the barrier came apart. Tires were strewn across the track and the safety car was deployed - but Fernando Alonso missed the yellow flags and fired into one of the tires and then the trackside barrier at high-speed, causing yet more damage.

The track was completely covered in debris, with Alonso in need of medical treatment. He ultimately only suffered bruising, but had to be brought by ambulance to the local hospital. The F1 rules allowed a race result to be called once 75% of the race distance had been completed - so that's what they did, ending the race after 56 laps.

As the podium ceremony went on, Eddie Jordan was clearly aggrieved - perhaps not only because of the unfair result, but also because Fisichella's car caught fire on the way back to the pits. It was a suitably crazy end to a crazy race.

It wasn't over yet, though. The stewards took a closer look at the data and found that Fisichella had indeed started lap 56 when the red flag flew, meaning that the results should have been counted from the end of lap 54 - by which time he had overtaken Raikkonen. They announced five days after the race that the results had been updated and that Fisichella was the rightful race winner. At the following race weekend in Imola, Raikkonen handed the trophy over to Fisichella in an official ceremony. And...breathe.

The altered race results meant that none of the drivers who finished in the top three actually stood on the correct step of the podium. Raikkonen stood atop the podium and heard the Finnish national anthem play, when in fact he should have swapped places with Fisichella. Meanwhile, 3rd-placed man Fernando Alonso was in an ambulance somewhere in the depths of Sao Paulo en route to Sao Paulo when the podium ceremony took place.

#onthisday 18 years ago was run the 2003 #BrazilGP, one of the craziest race in the #f1 history. My first win. pic.twitter.com/zDuoMNfxnS

The 2003 Brazilian Grand Prix is without question one of the craziest F1 races ever held, if not among the craziest sporting events ever held. The nature of the victory makes it even more iconic than Jordan's final win would already have been and it's a nice touch that the team's last win came in such a classic race. It was also Fisichella's first ever F1 race win. Two years later, Eddie Jordan sold the team and they have gone through several name changes since - they enter this season as Aston Martin Formula One Team.

Aston Martin may well win an F1 race or two, but we doubt any of them will ever be as entertaining as the last Jordan race win in Brazil in 2003. 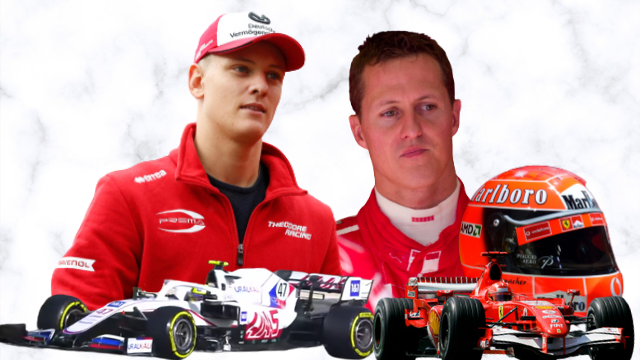