After a Formula One season for the ages, the driver's championship was decided in the most dramatic circumstances this afternoon.

There was always a chance that the battle between Lewis Hamilton and Max Verstappen could provide us with some remarkable moments in Abu Dhabi, but few could have predicted just how crazy things would get.

With the Brit leading fairly comfortably during the last few laps, a safety car would change everything. Verstappen was allowed to fit new tyres, while the gap between himself and his rival was eliminated.

In the end, the Dutchman would come out on top in a one lap showdown.

MAX VERSTAPPEN SNATCHES THE WIN ON THE LAST LAP!! 😰

A FIRST WORLD CHAMPIONSHIP FOR THE RED BULL DRIVER 🏆

Unsurprisingly, not everyone was enthused by the way the championship was decided.

Some felt that Hamilton was very harshly treated, although it is worth nothing that another controversial decision did go his way earlier in the race.

It will not come as a shock to you to learn that many of those that were complaining were based across the Irish Sea.

The British Twitter sphere was awash with complaints about the way the race was handled.

Of course, Piers Morgan would have to be among the first to complain. Even his arch nemesis Gary Lineker agreed with him.

I don't know what I've just watched but it can't be right. Hamilton's been robbed, surely? #F1

What a joke. That stinks.

British driver George Russell, who was literally taking part in this grand prix, was equally unhappy.

Max is an absolutely fantastic driver who has had an incredible season and I have nothing but huge respect for him, but what just happened is absolutely unacceptable. I cannot believe what we’ve just seen.

F1 reporter Matt Gallagher felt that this incident was deserving of a day in the courts.

I guarantee you this is going to court

FIA the entire season were a complete joke.

Get rid of Michael Masi immediately.

In all, they were just a little bit annoyed about the whole situation.

Hamilton had to pass the back markers. Not for Verstappen. Hamilton's 11 second lead before the crash, not considered.

Normal race protocol, out the window. @MercedesAMGF1 need to call that what it was - a stolen result, a stolen Championship.

Lewis absolutely robbed, what did I just watch 🤯

Everyone knows who the real champ is. Blessed always 🙏🏾 @LewisHamilton 🐐 pic.twitter.com/cp2N6iZe3R

The only one who has beaten Lewis Hamilton today is Michael Masi. The man is an utter disgrace #F1 #AbuDhabiGP 🇦🇪

Formula 1 is a big load of bollocks really isn't it 🤣🤣

Hamilton leading by 11 seconds, bloke crashes, safety car for 9 laps, Max suddenly side by side and wins on the last lap. What on earth have I just seen?

Imagine the equivalent happening in athletics, say. Telling the lead runner to slow down because someone had fallen over. The guy way behind gets to stretch out, pop on some new trainers and then it becomes a sprint finish. Absolute joke! #F1Finale #Hamilton #Robbed

The FIA make a decision. Red Bull radio in asking for it to get changed. Stewards change their mind - Lewis Hamilton robbed. #AbuDhabiGP

Hamilton can certainly count himself as unlucky not to have come out on top, although you do have to wonder if the British public would have had the same opinion if the roles had been reversed and Verstappen was the one to miss out? 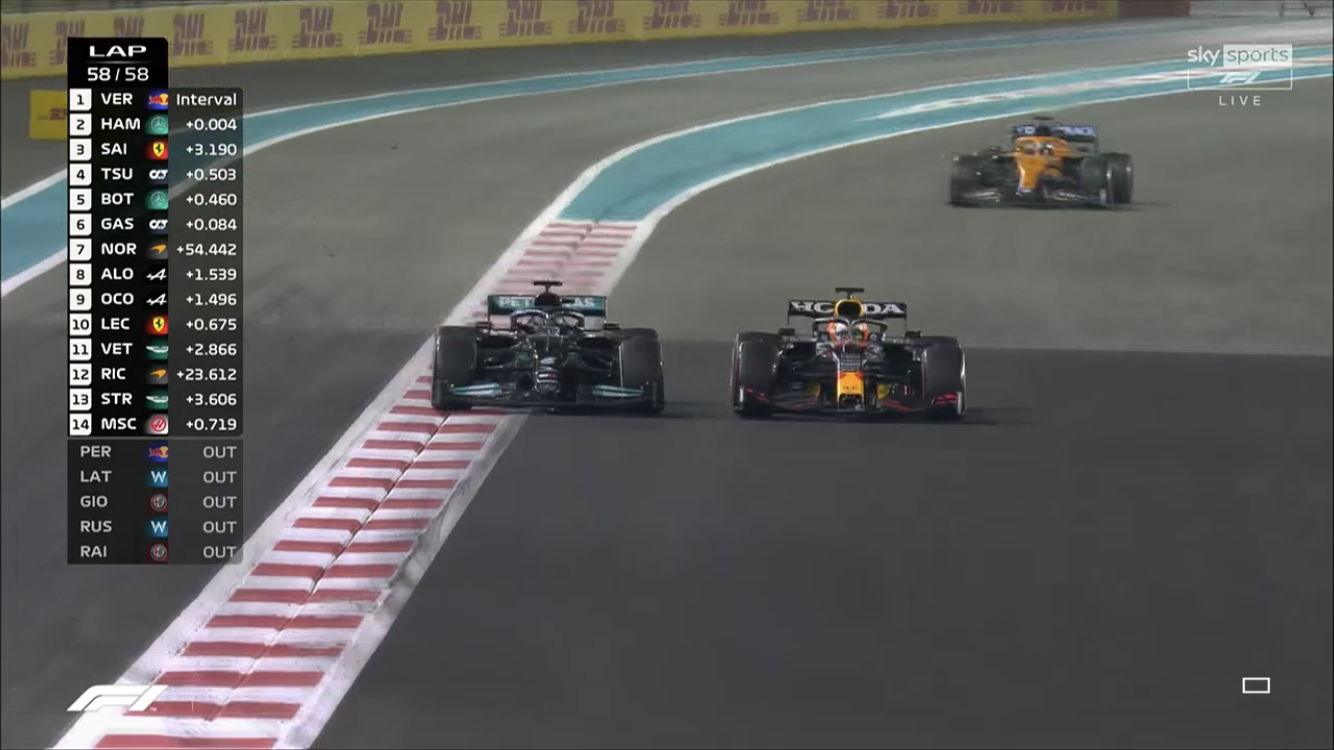