The Red Bull standout has been the talk of the racing world after his fierce battle with rival Lewis Hamilton in Saudi Arabia.

The two were immersed in an ultra-competitive struggle at the top of the leaderboard but Hamilton would have the last laugh.

It wasn't without its controversy - as Verstappen endured two time penalties - including one involving a crash between the two drivers.

The Sky Sports commentator believes the Jeddah track was partly to fault for Verstappen's approach to the Grand Prix on Sunday.

"F1 has a problem in that the design of the racetracks, particularly with regard to the 'safety' run off areas, and the Sporting Regulations, simply can't contain the way that Verstappen is choosing and needing to go racing at the moment," he said.

New Jeddah F1 track is going to significantly reward the brave and accurate. Multiple series of very high speed corners between walls where there’ll absolutely be no small accidents. 27 turns of which about 14 will be recognised by an F1 car, but there’s peril everywhere pic.twitter.com/lNPpZ6bJ1s

"And it's those moments, such as the infamous turn four in Brazil, which are generating the confusion, controversies and inconsistencies."

Verstappen's two penalties came as a result of a wide berth in overtaking Hamilton on Lap 37 of the race, and the now infamous 'rear-ending' incident.

During that moment - the Dutchman was instructed to let Hamilton overtake him - but a mix up in communication and strange positioning led to the collision.

"I'm in awe of Verstappen's driving skills and racing nous, and have championed him since the Chinese Grand Prix of 2015 when he was in the Toro Rosso," Brundle continued.

"His touch and control behind the wheel is something to behold, but it saddens me that he's resorting to such tactics, he's better than that. And for all his outwardly carefree attitude it will be such a shame if his legacy is to be labelled as an unfair driver."

Brundle likens Verstappen's competitiveness to that of two F1 legends - Ayrton Senna and Michael Schumacher - who he believes took risks that tattered their reputations.

Max Verstappen was told to let Lewis Hamilton past and he slowed but then Hamilton ran into the back of him!! His front wing is damaged!

Then he gave his take on the most talked about incident of the race. Brundle believes both drivers could have been at fault for the collision:

I believe Max initially made a genuine effort to let Lewis through but when he realised that they were both planning to be second over the impending DRS detection line to gain advantage down the pit straight, and with Lewis now on his rear bumper, he angrily hit the brakes at 69 bar momentarily generating 2.4G deceleration, nearly half that normally generated into a heavy braking zone for a high speed approach to a hairpin, and then pinned the throttle.

All eyes will be on Abu Dhabi next weekend as the Red Bull and Mercedes standout are level on points in the Driver Standings.

Every race will count. From practice to qualifying, to the Grand Prix itself. As Brundle said himself - "This is going to be some race."

See Also: Verstappen On Saudi Forfeit: 'This Is More About Penalties Than Racing' 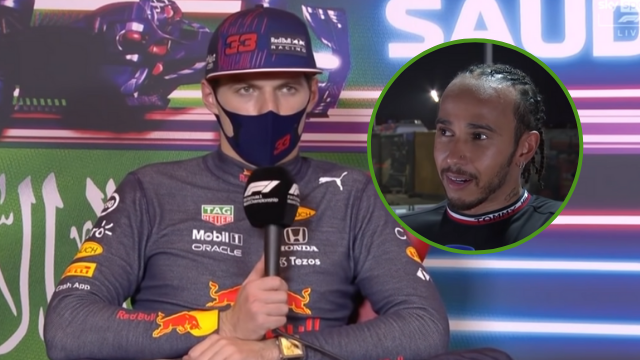