F1: What Imola Taught Us About George Russell's Place At Mercedes

The early season F1 pecking order always tends to show itself best after four or five races. While reliability issues can sometimes give a false indication of a team's competitiveness in the opening weeks of the season, you have a clearer idea of where most teams stand after a chunk of races have been completed.

Two things seem certain for F1 in 2022. First up: Red Bull and Ferrari are the pace setters, and are likely to fight it out for this year's championships. Secondly: Mercedes have an awful lot of work to do to remain ahead of the midfield.

When Mercedes' issues became apparent at the first race of the season in Bahrain, it appeared as though Lewis Hamilton, the seven-times world champion and experienced head at the team, would be the one keeping the ship afloat.

In a turbulent opening to the season, however, it is his teammate George Russell that has impressed in the Mercedes. Hamilton has struggled with the new regulations and the unpredictable W13, while Russell is the only man on the grid to have finished in the top five at all four races so far.

Russell claimed fourth place in Sunday's race at Imola, while Hamilton faltered throughout the weekend on his way to finishing outside of the points in 14th. If things continue like this, Russell could be out of sight of his teammate before the F1 season even reaches the halfway point.

F1 fans and pundits alike have been clamouring to see George Russell in the second Mercedes seat for quite some time. Russell performed exquisitely at a struggling Williams team for three full seasons, even taking an astonishing (and, admittedly, fluky) podium at last year's Belgian Grand Prix.

He was finally given his chance at Mercedes for 2022, and he hasn't disappointed. Despite the lack of pace in the car, he took a solid P4 in Sunday's Emilia-Romagna Grand Prix to continue his record of finishing in the top five at every F1 race this season.

He is the only driver to do so, with even Charles Leclerc failing to match his record. To have pulled off such a feat in a car which looks very tricky to drive is a credit to Russell's ability.

A lot of the reaction to Mercedes' performance this weekend has centred around Lewis Hamilton, and understandably so. The Brit is in contention to retire as the greatest of all time, so seeing him struggle so much for a team that has won the last eight world championships is naturally jarring.

But Hamilton is a powerhouse and will likely bounce back as the season progresses. It is a shame that the somewhat justifiable focus on Hamilton has nonetheless affected the attention being given to Russell in the other Merc, who has done nothing but spectacular work in the car this year.'

Nico Rosberg made that point on Sky Sports over the weekend. While the punditry team (including Rosberg) were exploring the reasons for Hamilton's poor form, Rosberg took a moment to point out how well George has been driving:

Let's not forget that Russell is in P4 with that same car. So Lewis definitely had a big role to play in that poor result this weekend.

After a quiet but solid opening round in Bahrain, Russell has beaten his teammate in all but one competitive session since. He did have a fortunately timed safety car to thank for finishing on the podium ahead of Hamilton in Australia, but Russell has nonetheless smashed it in a year where many expected him to be playing second fiddle to his vastly more experienced teammate.

Perhaps the most impressive shift in Russell's game this year has been his mentality. It's clear from his press appearances that he has been drilled hard with the Mercedes PR game, but his in-race thinking has also changed. He seems calmer this year, and better able to deal with the pressure of driving in lofty positions.

Whereas he threw away several chances of points in his early career at Williams, he has managed to grasp opportunities with both hands at Mercedes. Sure, he was lucky in Australia. But, he not only held on to his position from Hamilton, but pulled away at the race's conclusion. He has learned to deal with the pressure of racing at the front, and that has changed up his racing dramatically.

This weekend's race at Imola perhaps proved this point in a way none of the previous rounds had. At Imola in 2020, Russell was on course to claim his first points in F1, before he spun behind the safety car and crashed out of the race. Similarly, at Imola in 2021, he was on course for his first points for Williams, before spinning into Valtteri Bottas and failing to finish the race again.

This year, he comfortably outpaced his teammate, before holding off Valtteri Bottas under immense pressure to claim a strong and much-needed fifth place for his team.

This battle for fourth between George Russell and Valtteri Bottas has been brilliant! 💪 pic.twitter.com/vIPYXfwulg

In a way, the pressure is nicely off George Russell's shoulders now. He has solidified his position ahead of his teammate, now a full 21 points ahead of Hamilton. Given that he entered this season expected by most to finish behind Hamilton, he is in a terrific position.

The fact that Mercedes are also not contending for this year's championships means that there is less pressure on Russell to play the team game as there would have been in previous years.

F1 in 2022 has been nothing if not unpredictable. McLaren, having left Bahrain as arguably the slowest team on the grid, have now claimed back-to-back race results of 7th, 5th, and 3rd. Things can turn around quickly, and perhaps George Russell has merely put his consistency to good use in a chaotic opening.

But, in a season where Mercedes are scrounging for any major points they can, that very same consistency could yet prove to be a priceless asset for the Silver Arrows.

Wrapping up from the Emilia-Romagna Grand Prix 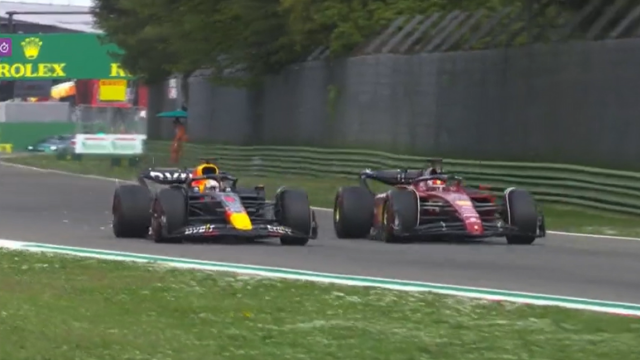