Watch: Hamilton And Verstappen Had Another Incident At Sao Paulo Grand Prix

Mercedes were up against it from the get-go as Lewis Hamilton started Saturday's sprint race in dead last due to a technical infringement in qualifying.

The reigning drivers champion managed to overcome the odds and pass many cars, rallying from 20th to 5th in a remarkable performance.

The miraculous efforts of the sprint race were short-changed, as Hamilton had to start the Grand Prix in 10th due to an engine change.

Midway through the race, the title picture was playing out on the track as Max Verstappen held first place and Hamilton was close behind in second.

Hamilton enjoyed a fantastic start to the race going from tenth place to second. Most notably battling with Sergio Perez and passing on Lap 19.

It wasn't until Lap 48 when Hamilton decided to aggressively go for P1 and make his move. What ensued was controversial but not deemed punishable by F1 officials.

All the details over on the #SkyF1 blog ⬇️

Verstappen pushed Hamilton wide during Lap 48 as he was being overtaken, leaving both cars wide off the track and staying in their positions.

While he had no luck on Lap 48, Hamilton was third time lucky in managing to overtake his rival later on Lap 59 and hold off to mark a memorable weekend.

Snatching back the momentum in the title race to close the gap on Max Verstappen 🏆#BrazilGP 🇧🇷 #F1 pic.twitter.com/8I4liVQrnn

"Coming into this weekend I never ever thought we would be able to close the gap like we had today," Hamilton told Sky Sports after the race.

The win leaves Hamilton in contention for the title despite going up against all the odds in Sao Paulo. Teammate Bottas said he was "in his own league."

No driver has ever won the Sao Paulo Grand Prix from starting below eight in the grid. It undoubtedly was one of Hamilton's best weekends behind the wheel.

Max Verstappen now has a fourteen-point lead, with three races to go in the Formula 1 season.

See Also: Lewis Hamilton Goes On Overtaking Bonanza From The Back In Sao Paulo Sprint Race 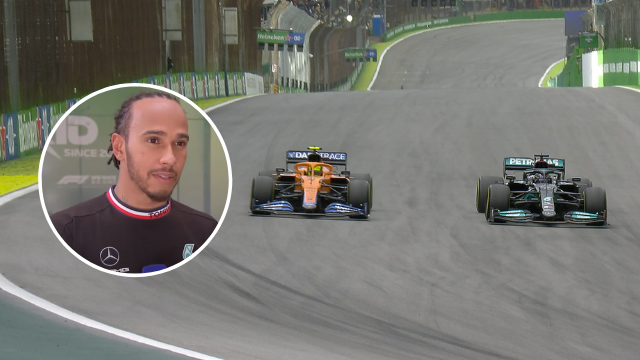