Why Hamilton x Verstappen Is The Showdown Of The Century

It has been a season like no other, and it truly will be a showdown like no other between Lewis Hamilton and Max Verstappen. Level on points with just Sunday's Abu Dhabi Grand Prix to go, it really is anyone's game and either way it will be an historic Formula 1 title winner in 2021.

An eighth title for Hamilton, or a first for Verstappen? It is just too close to call between F1's two modern superstars - and only the finest season in modern memory could have brought us to this point.

Formula 1 has been waiting for Hamilton v Verstappen

In any other year, it would seem natural to start with the man chasing the all-time record eighth world championship. Having become the first man to ever surpass both 100 wins and 100 pole positions this season, Lewis Hamilton is quickly becoming the unrivalled statistical leader of Formula 1 history.

But this is not "any other year" and Lewis Hamilton's time as the main show in town may well be coming to an end because of 24-year-old Dutchman Max Verstappen. 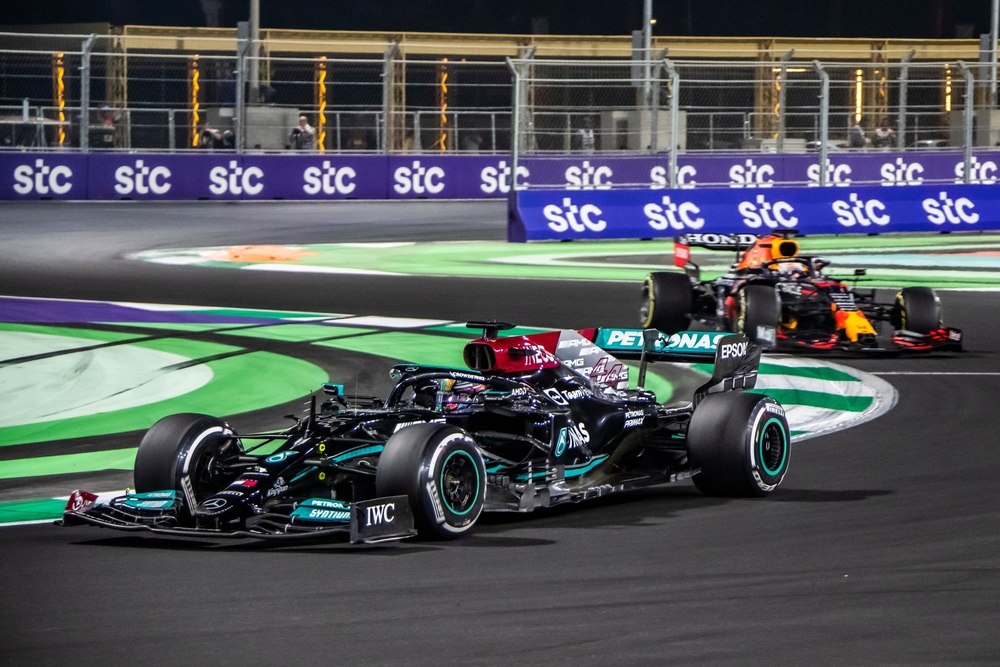 For long-term fans, it is hard to believe that Verstappen is currently in the midst of his seventh season in Formula 1. When he arrived on the scene with Toro Rosso in 2015, there was certainly promise that he could be something special, but he was unrefined. He has shown signs of brilliance over the past few years and, other than Hamilton, has been the standout performer since 2019.

But, in 2021, he has taken things to a stratospheric level. Even for a long-term fan like myself, it is hard to remember any driver having a season as consistent and impressive as Max Verstappen's year in 2021.

He has stood on pole position for nine races, won the same amount and, other than the Hungarian Grand Prix, he has not finished a race outside the top two all season long. Even in that Hungarian race, there were mitigating factors: he drove more than 60 laps with significant damage to his car, sustained in a crash he did not cause.

The pace from Verstappen has been simply blistering all season, with two-time world champion Fernando Alonso saying this week that he believes that the Dutchman is simply driving on another level to the rest of the field.

That hasn't quite been the case this year, though, and that is due to the continued brilliance of Lewis Hamilton. The two have been locked in a gripping title battle since the very first race of the season, when Verstappen passed Hamilton for the lead in the dying stages of the Bahrain Grand Prix - only to have to hand the position back, as he completed the overtake off track.

And then hands it back to him moments later #BahrainGP 🇧🇭 #F1 @LewisHamilton @Max33Verstappen pic.twitter.com/PJoXhaCjHd

Ever since then, the two have been near inseparable. There were battles (and on-track passes) for the lead in Imola, Portugal, Spain, and France in the opening months of the season, and both had particularly memorable wins during those months. Hamilton's perfectly planned charge at the end of the Spanish Grand Prix was a strategic masterclass. On the other hand, no word could be used for Verstappen's 35-second win at the Styrian Grand Prix other than "destruction".

Speaking of destruction: we have to talk about Silverstone. The opening lap of this year's British Grand Prix was, without question, the defining moment of the current era of Formula 1. Arguably the greatest of all-time, racing against the young superstar who some have tipped to surpass him, battling corner after corner for the lead of Hamilton's home race.

As David Croft on commentary noted, the crowd at Silverstone were roaring their approval for an incredible display of open-lap racing. This was everything we were waiting for during Hamilton's reign of dominance: a battle between the old head and an upstart with a claim to his throne. Wheel-to-wheel, razor edge racing with no holds barred. And then...

Max Verstappen is out of the #BritishGP after an early clash with Lewis Hamilton 😬pic.twitter.com/3QOh6dhaPN

Silverstone changed everything in this title race. From that moment on, there was a personal, bitter edge to the Hamilton - Verstappen battle. The two had occasionally disagreed on incidents over the course of the first few months, but it was a sporting battle all the same, with great respect between the two. Now there was a bitterness to their rivalry

Verstappen was out on the spot after the crash, but Hamilton was able to continue. Adjudged to be at fault, Hamilton was given a ten-second penalty. His pace was so fast, however, that he still managed to snatch the race win with two laps to go.

The impact to the barrier was so great that Verstappen had to travel to hospital for a mandatory check-up. The severity of his injuries was certainly played up by his team Red Bull (by that I mean that he was fine), but the crash lit the touch paper of tension between Red Bull and Hamilton's team Mercedes.

Verstappen and his team both claimed that Hamilton's enthusiastic celebrations for winning his home race were tasteless, given that a collision he was judged to have caused had left his rival in hospital. It smacked of petty teenage drama, and it has ever since.

The two collided in spectacular fashion once more at September's Italian Grand Prix, with an overly ambitious move from Verstappen ultimately launching his car over the top of Hamilton's and ending both of their races.

In a similar scenario to Verstappen's Silverstone hospital visit, the crash at Monza ended with the wheel of the Red Bull making direct contact with Hamilton's head. Both drivers were fine, but the line between acceptable and unacceptable racing was being tread carefully (or rather, uncarefully) by the pair once again.

And then there was last week's Saudi Arabian Grand Prix, where the two battled for the lead on five separate occasions and collided yet again in a chaotic race.

Jeddah last week perhaps best showcased just how bitter the rivalry between Hamilton and Verstappen has become - or rather, in all truth, between their two teams. The two drivers have exchanged barbs on multiple occasions this season, with Verstappen questioning Hamilton's aggression and mentality, and Hamilton pointing out the dangers behind the Dutchman's driving.

But the petty childishness on show from their team bosses has (almost) spoiled a truly exhilarating season of racing. There have been accusations of foul play, personal jabs thrown in public by both team bosses. Even this week alone, Red Bull team boss Christian Horner claimed that Verstappen would have won the title easily if he had been in Hamilton's car all year.

Aside from the fact that that claim doesn't seem to be grounded in any kind of fact (three of Hamilton's eight wins came when Red Bull had the fastest car on the grid) it is the kind of unsporting remark that has tainted an otherwise spectacular title battle.

All of this is not even to say that the duel between Lewis Hamilton and Max Verstappen has been the only thing going for this Formula 1 season. Allow me to regale you with some of the staggering facts behind this year, one of the most captivating in modern history...'

That is not even to mention that the quality of the racing has been top quality throughout the season. The battles for the lead between Hamilton and Verstappen in Bahrain, Spain, France, the USA, and Brazil were matched by all-time great races in Imola, Azerbaijan, Hungary, Monza, and Silverstone. It is rare that a season will have more than one or two great races - let alone close to double figures of all-time classics.

Esteban Ocon claimed his first ever win at August's Hungarian Grand Prix. Daniel Ricciardo claimed his first win since 2018 and McLaren's first since 2012 at the Italian Grand Prix at Monza. George Russell managed an astonishing front row start and podium for Williams at Spa. The rejuvenation of world champions Sebastian Vettel at Aston Martin and Fernando Alonso at Alpine has also been a feel-good story of the year.

And there has been heartache as well. Lando Norris was within four or five minutes of a maiden win at the Russian Grand Prix, with Charles Leclerc similarly close to a surprise win at Silverstone in July. Vettel's second podium of the season in Hungary was stripped away for a fuel irregularity.

Not to mention the comedy of some of this year's moments. Bizarre circumstances led to Lewis Hamilton taking the race start solo after a red flag in Hungary. Sergio Perez's father became public hero number one with his energetic celebrations at November's Mexican Grand Prix.

EVERYONE PITS on the formation lap!

Lewis Hamilton is the ONLY driver to take the start 😱#HungarianGP 🇭🇺 #F1 pic.twitter.com/PQuuy5nfUe

It's this simple: there has never been a Formula 1 season quite like this. There have been captivating stories at every single turn, and even the supporting cast have done their bit to make this year one of the most spectacular of recent times.

Maybe that's something to do with "The Netflix Factor". The immense popularity of Drive to Survive has not only broadened the sport's fanbase significantly, it has also allowed long-time fans an insight into the lives of both contenders like Hamilton and Verstappen and midfield runners like Pierre Gasly and Carlos Sainz.

There's also the part of me that thinks that the Netflix and social media element has merely happened at the right time. There was nothing that was ever going to stop this season from being captivating, and it has delivered at just about every round.

In Max Verstappen, Formula 1 has found its equivalent to Kylian Mbappé in football. Verstappen is the energetic but flawed youngster who has already in his young career changed the public perceptions of what it is to be a racer. His racing is still on the edge and, sometimes (like in Jeddah last week), it still crosses the line of "dangerous".

But Verstappen is undoubtedly the greatest talent of his generation - as is Lewis Hamilton with his. Hamilton has been the definition of a perennial winner for the best part of a decade now and, perhaps, now has a final shot to prove his worth against the next true great in Formula 1 history.

In one fitting twist, this will be only the second ever season finale to begin with the top two in the championship dead level on points. There could not be any less between Lewis Hamilton and Max Verstappen for Sunday's race in Abu Dhabi, or more on the line. With a lap from the gods, Verstappen has claimed pole - but Hamilton starts on a better strategy, right alongside him in P2.

It could not be scripted any better if we tried. I seldom like to say "I told you so", but this is one of those cases. Formula 1 has had this title battle coming for years. So, instead of embracing the inter-team and social media bitterness, let's enjoy it.

May the best man win. 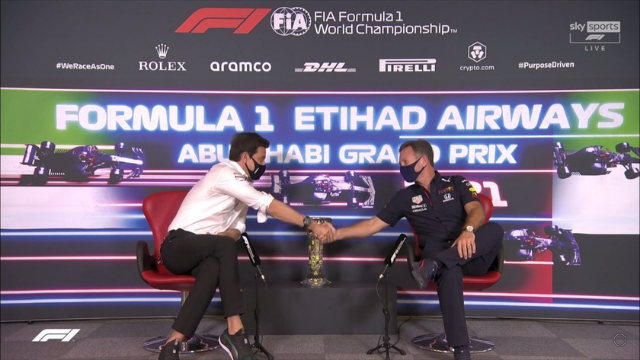