Not for the first time this season, the animosity between title rivals Max Verstappen and Lewis Hamilton has spilt over from the track and into the press conference room.

The pair exchanged jabs at each other ahead of the Russian Grand Prix, with Hamilton questioning whether the pressure of the title fight was beginning to get to Verstappen.

Max Verstappen and Lewis Hamilton appeared ahead of the media on Thursday, at the first race since their instantly infamous collision at the Italian Grand Prix two weeks ago.

Verstappen has rather roundly received the blame for the collision, which took both cars out of the race. It was one of the first mistakes the Dutchman has made all year and, despite being eliminated from the running, he still leads the championship by five points going into this weekend's Russian Grand Prix.

On Thursday, Lewis Hamilton commented on the collision, saying that Verstappen should have known when to give up on his attempted overtake and suggested that the mistake came from a lack of experience - after all, this is Verstappen's first ever title fight.

Hamilton was also asked about the incident and whether the pressure of that first ever championship battle was beginning to show signs of strain on 23-year-old Verstappen. He said:

Obviously he won’t admit to it, and I’m not going to make an assumption, but I remember what it was like when I had my first [title fight] and it definitely mounted up.

It was difficult. It was intense. I was going through a lot of different emotions and I didn’t always handle it the best. There’s a lot of self expectation and pressure because the desire to win is huge.

The two have come together on track on three occasions this year - minor contact at the first corner at Imola in April was a taster of what was to come. At July's British Grand Prix, the two collided spectacularly at the fastest point of the track, sending Verstappen out of the race.

Hamilton ultimately went on to win his home race, despite a ten second penalty for causing the crash. If anything, Hamilton has shown more signs of pressure than his Dutch compatriot this year, making similar errors at Azerbaijan and Imola.

The title rivals come together at Copse, pitching Verstappen into a high-speed crash.

The Dutchman was able to walk away but he has been taken to hospital for precautionary checks#BritishGP 🇬🇧 #F1 pic.twitter.com/ol1s9dRJoa

When asked to respond to Hamilton's comments, Verstappen gave a sassy and defiant response, suggesting he is not interested in playing mind games with the seven-times world champion.

Yeah, I’m so nervous I can barely sleep. I mean, it’s so horrible to fight for a title. I really hate it. Those comments, it just shows you that he really doesn’t know me – which is fine.

I also don’t need to know him, how he is. I’m very relaxed about all those things and I really can’t be bothered, I’m very chilled.

Lewis Hamilton has been there and done that with title battles, and he has proven in the past that he is not afraid to play mind games.

It seems, though, like Max Verstappen has no interest. We have an amazing final eight races on our hands. 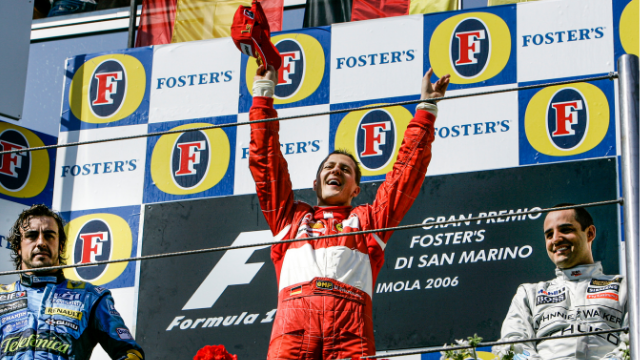 Motorsport
12 hours ago
By Eoin Harrington
How To Spend Your Time In The Formula 1 Off Season
Motorsport
5 days ago
By Eoin Harrington
Northern Irish F1 Race Winner Thinks 'Drive To Survive' Is To Blame For Recent Controversy
Motorsport
1 week ago
By Jonathan Byrne
F1 Commentator Brundle Dismisses Lewis Hamilton Retirement Rumours
Popular on Balls
Rugby
6 hours ago
By Jonathan Byrne
Watch: Wayne Barnes Takes No Prisoners Sending Off Stade Player For Mouthing
Football
1 day ago
By Gary Connaughton
Carragher Reveals Unhappy Instagram Message From Lionel Messi After MNF Comments
The Rewind
1 day ago
By Gary Connaughton
Quiz: From Which Irish County Did This Company/Product Originate?
Football
2 days ago
By Jonathan Byrne
Women Footballers Call Out 'Embarrassing' Sun 'Exclusive'