The finish to yesterday's Azerbaijan Grand Prix was full of drama, but the controversial incidents in the race were not confined to Max Verstappen and Lewis Hamilton's failure to get a place on the podium.

The two leaders in the driver's championship both had unfortunate incidents as the race drew to a close. Firstly Verstappen suffered a rear tire malfunction during the 48th as he looked to be on his way to a fairly routine victory, being forced to withdraw as a result.

Lewis Hamilton was in second position on the restart after the stoppage, only to bizarrely drive straight off the track on the first corner. He would finish in 15th place.

While those two incidents stole most of the headlines, Mick Schumacher was also very unhappy with something that happened during the course of the race.

The Haas driver was in 14th place when he moved into teammate Nikita Mazepin's slipstream on the straight finish in Baku. However, the Russian would suddenly jink to the right in an attempt to stop Schumacher from overtaking him, almost ramming him into the concrete wall as a result.

Considering they were travelling at around 200mph at the time, it is no surprise that the 22-year old was not happy with Mazepin's actions. He made his feelings clear to the team over the radio.

Mick Schumacher not happy with his teammate... #AzerbaijanGP #F1 pic.twitter.com/ITDA9UHCxQ

What the f*** was that? Honestly, seriously, does he want to kill us?

This was only Schumacher's sixth race in Formula One, but he has been comfortably outperforming his teammate up to this point despite being largely at the back of the field in races.

Speaking after the race, Haas team principal Guenther Steiner said that the two drivers would go on to clear the air soon after the grand prix.

Obviously, there was a situation on the straight that was all resolved, and we've cleared the air.

There was some misunderstanding, but we're fine and all moving on from it.

It will be interesting to see if the tension between the pair carries on for the next few weeks. 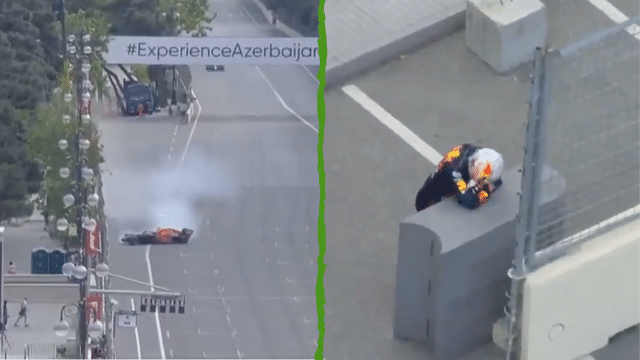