Watch: The Craziest Fan Intrusions That A Camera Was Fit To Capture

Football fans haven't exactly covered themselves in glory over the weekend.

Three live games over the weekend were marred by so-called supporters encroaching on to the field of play and becoming physically involved with players. Friday night saw Rangers captain James Tavernier grapple with a hooded Hibs hooligan who launched himself limbs a-flailing from Easter Road's East Stand in what has probably ended up the least notorious episode of the last few days.

Sunday was particularly troubling. Manchester United captain Chris Smalling was shoved by an errant Arsenal arsehole celebrating Pierre-Emerick Aubmayang's match-sealing penalty at the Emirates and, on a shite-inducing weekend for away team captains, Jack Grealish took a rap from a Birmingham City bollocks during the Midlands Derby at St. Andrew's.

Whilst the escalation in incidents over the past few days has seen the issue rocket to the top of news bulletins and to the back of print publications, if you want some real OMGWTFs, there's plenty out there to ensure hours of YouTube procrastination.

We're leaving out footballing incidents (because quite frankly where the hell would you finish) so apologies if your favourite casual dust-up doesn't make the must-see list.

But some of these are actually scary.

Later to become an American tennis player, Monica Seles was at the top of her game in 1993, having picked up eight Grand Slam titles whilst more-or-less dominating the women's game from the start of the '90s.

Her emergence coincided with a period of relative leanness for German superstar Steffi Graf, with Yugoslavian-born Seles overcoming the now Mrs Andre Agassi in two consecutive French Open finals in 1991 and 1992 before going down again to the World Number One in the 1993 Aussie Open.

Three months later, Seles was leading a Citizen Cup quarterfinal match against Magdalena Maleeva in Hamburg when crazed Graf fanatic Günter Parche stormed to courtside before plunging a boning knife between the shoulder blades of the player whilst she rested between games.

Parche, unbelievably avoided a custodial sentence, instead being placed on probation for two years and ordered to attend psychological treatment. The 90's. *Shake My God Damn Head*

Limerick rugby ref Dave McHugh installed himself as one of the best officials about in the early days of the professional game. But that didn't save him from the ire of pissed-up Springbok supporter Pieter Van Zyl, during a 2002 Tri-Nations game between South Africa and New Zealand in Durban.

McHugh suffered a dislocated shoulder after Van Zyl wrestled him to the ground as both sides set for a scrum, having scaled a fence to get on to the playing surface.

Security issues aside, it beggars belief how a man with a sump like that could hurdle anything more than a doorstep!

2002 also saw one of the more disturbing, if non-violent, incidences of enamourment, when Aussie Rules player Greg Stafford was approached by female fan Joanna Cramer at the MCG as his Richmond side tackled Hawthorn in an AFL tie.

Now, whilst being approached in a seemingly non-threatening manner, by an admirer of the opposite sex, willing to declare her undying love for you, whilst you kick a ball around a football pitch, might be some men's idea of fantasy, Cramer had some serious issues. 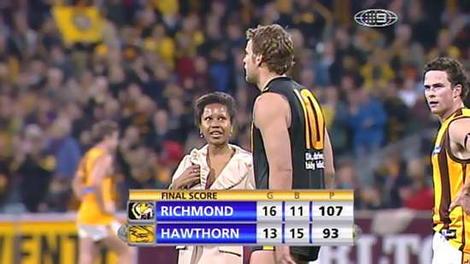 At the time, she had already stalked the ruckman for five years and he had taken a restraining order out against him. Total bunny in the bubbling water here.

During a KHL match between (ahem!) Avtomobilist Yekaterinburg and Salavat Yulaev Ufa, at the Yekaterinburg Sports Palace (thank you very much) Salavat's reserve goaltender Vitaly Kolesnik suffered a concussion and a nasty old gash to the scone when an inebriated Yekaterinburger - because that's obviously what they're called - scaled the glass behind the away side's bench and battered the Kazakh with his own stick.

As if the poor man didn't have enough to worry about, skating around on razor-sharp blades on ice with pucks flying at him at hundreds of miles per hour.

Aw, Neil Horan has given us some laughs over the years. What a chancer. What a dancer.

The Kerry native has roused hell at a number of high-profile televised events, including going on a frenzy during the early part of the noughties.

He near went full Suffragette at the Epsom Derby in 2004, before causing chaos at that year's Olympics in Athens when barging into marathon leader Vanderlei de Lima at the 35k mark.

The Brazilian ended up in the crowd and had his advantage over chasing second and third place runners halved with Horan's antics. He'd eventually finish third in the race.

He has turned up in other unusual places, including outside the hospital where Prince George was being born and doing a jig outside the Rolf Harris trial in 2015.

But by far Horan's must dangerous stunt came in 2003 when the former clergyman hopped the barrier at Silverstone and started galloping into the onward traffic coming off the Hangar straight declaring we should "Read the Bible".

Dangerous yes, but that moment of a steward dragging the green stockinged invader across the grass and out of sight with his kilt north enough to see his delightful green gonks is nothing short of a moment in time.

I'll take the opportunity to fire up my own favourite illegal intrusion, and an appeal for the same fella to get in touch. You'll know who you are.

The Irish hero who performed an acrobatic feat in Clones one Ulster Championship Sunday with a precariously placed Armagh fisherman's hat on him. The memory of your daring slip of the guards at the O'Duffy Terrace is remembered with great fondness.

SEE ALSO: 'It's A Bit Of A Rugby Nation' - Bohs Striker Makes Appearance On 'Countdown'

Football
1 day ago
By PJ Browne
Can You Unscramble These 12 Irish Footballer Anagrams?
4

Football
5 hours ago
By Balls Team
Relations Don't Speak With Brendan Rodgers Because He Left Celtic
Football
1 day ago
By PJ Browne
Can You Unscramble These 12 Irish Footballer Anagrams?
Football
1 day ago
By Balls Team
Celtic Exit Somewhat Of A Surprise For Jonny Hayes
Popular on Balls
The Rewind
8 hours ago
By Michael McCarthy
Watch: Aussie Cameraman Assaulted By US Police On Live TV, Prime Minister Demands Investigation