OCI chief Pat Hickey was arrested in Rio De Janeiro this morning in connection with a ticket touting scandal that now threatens to engulf Ireland's Olympics. Somehow, Hickey managed to eclipse a drug scandal, a judging scandal and two silver medals in the space of 10 minutes during the early hours of the Brazilian morning.

Hardly a shocker for a prime mover such as himself...

Earlier today we had it confirmed to us by a high profile Irish athlete in Rio that, as assumed, the Ireland Olympic team (i.e. the athletes from each sport) travelled in Economy Class on the 11-and-a-half hour flight to Rio De Janeiro.

Economy wouldn't suffice for Pat Hickey, however, who travelled in First Class from London, as is visible in Philip Bromwell's tweet below. The picture was taken when Hickey's Olympic accreditation, passport and flight were presented to the media following his arrest.

First class was only for Pat and the lads,

we were told by the Irish Olympian we spoke with this afternoon.

Out of curiosity, we picked a random day next July and checked the First Class, one-way ticket prices from London Heathrow to Rio De Janeiro International Airport. It cost just under €10,400 - again, this being next summer, when there are no Olympics. Hickey's ticket earlier this summer likely cost considerably more. 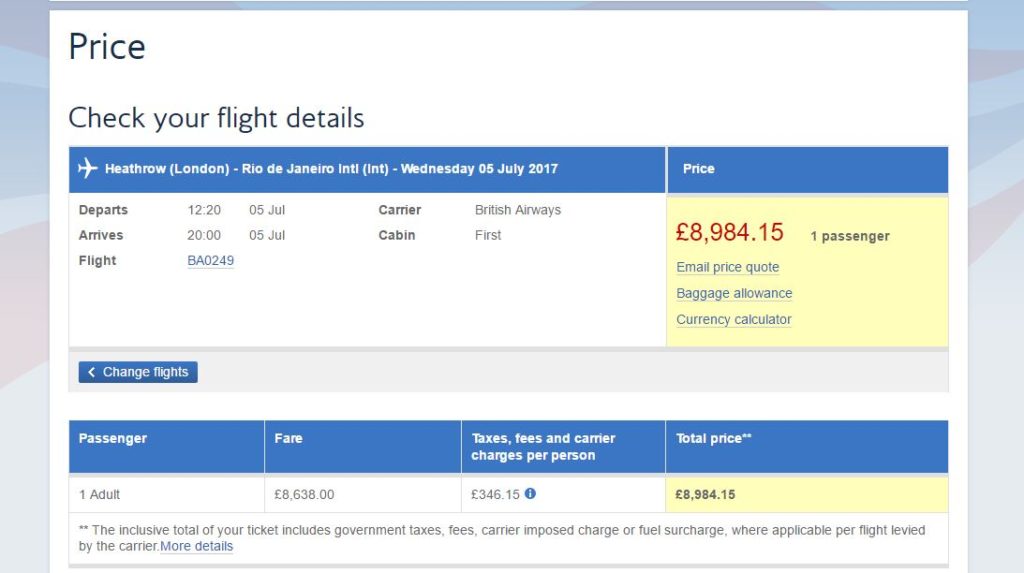 To put that into context, the top category of athlete funding (or Podium funding) from The Irish Sports Council is €40,000 per year. This is the category that 20 (9 Olympic and 11 Paralympic) of our so-called 'podium' athletes such as Michael Conlan and Annalise Murphy fall under.

The vast majority of Irish Olympians, however, are granted far less than that. Hickey's First Class ticket to Rio would have cost over half of what many Irish Olympians will be paid this year. As far as we're aware, he did not medal in judo this summer.

The contrast didn't end with flights, mind. Compare Hickey's room in the Windsor Marapendi hotel, from which we saw footage of him being arrested today...

Came into the room last night and was greeted by this, he said "Zika can go f#@k😂😂" @paddyb_ireland lol pic.twitter.com/EayFAh8wOD

Furthermore, Hickey and his fellow IOC heavies are each given $900 expenses per diem - this to spend on 'entertainment' as well as food. It should be pointed out that this sum is paid by the IOC and not the OCI. Conversely, scores of Olympics volunteers have walked away from the Games due to poor working conditions and lack of food.

Olympic volunteers quitting because of long hours, lack of food, as IOC members get $900 a day per diem. https://t.co/kYTEEvefnj

You can understand how the likes of Paddy Barnes wouldn't be too sympathetic towards the head of the Olympic Council of Ireland.

Hopefully this ticket scandal doesn't include our flight tickets home!

Olympics
8 months ago
By Sean Meehan
IOC President Says Olympics Will Go Ahead This Summer And There's No 'Plan B'
Boxing
1 year ago
By Gary Connaughton
IOC Criticised After Boxers At London Qualifier Test Positive For Coronavirus
Olympics
5 years ago
By Conall Cahill
Sports Minister Refuses To Say He Has Confidence In OCI President Pat Hickey
Popular on Balls
GAA
21 hours ago
By PJ Browne
All-Star Keeper Manages Scotstown To Monaghan U15 Title
GAA
22 hours ago
By PJ Browne
'He Held The Room For 7 or 8 Minutes, There Wasn’t An Eyeball Off Him'