On one day in 1932, in the space of one hour, Ireland won more Olympic gold medals than it would manage in the next 60 years.

The first of them came in the men's 400m hurdles. It'd be 84 years before another Irish male sprinter (Thomas Barr in 2016) reached an Olympic final.

Bob Tisdall was educated at secondary level in Shrewsbury College and made his name as a sprinter in Cambridge University. He had a plummy English accent and the Brits asked him to compete for them at the Los Angeles Olympics in 1932.

He refused on the excellent grounds that Britain wasn't his country. Tisdall was raised in Nenagh in Tipperary and was determined to represent Ireland.

In April '32, Tisdall wrote to General Eoin O'Duffy (he who later became so fond of blue shirts) who was the head of the National Athletic and Cycling Association, the forerunner to the OCI.

Considering that Eoin O'Duffy was one of his predecessors, it's a tribute to Pat Hickey's talent for controversy that he's managed to become the most notorious OCI President of all time.

Tisdall wrote that he wished to be considered for selection to the Olympic team. O'Duffy set up a trial run at Croke Park on June 3.

According to History Ireland's account, Tisdall ran poorly the first time out, falling shy of Johnny Gibson's national record. The General, however, was much taken with Tisdall's style and gumption and offered him another go. On 18 June, Tisdall beat the Irish record, running the 400m in 54.2 seconds.

Despite winning both the heat and semi-final, Tisdall was a rank outsider in the final against luminaries from the US, Sweden and Italy. However, he got off to a dream start and stretched his lead out over the first couple of bends. Coming to the last hurdle, he had a healthy lead. The gold looked certain. 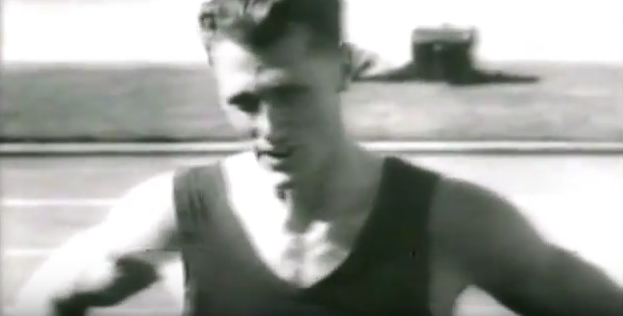 However, he crashed into the top of the second last hurdle and stumbled for a few steps. He held the lead, however, re-gathered himself and eventually breasted the non-existent tape just ahead of America's Glenn Hardin. He got around in a new world record but it didn't stand because he'd clipped a hurdle on the way around.

Thus, Hardin set a new world record in a race in which he'd finished 2nd.

Having won this race, I have realised one of my life's ambitions. I said before I had run here that it'd be the last race I'd run. I want to play football. But now I'm not so certain.

After winning, Tisdall broke away from the well-wishers and headed to the hammer throwing ring to support his LA roommate Pat O'Callaghan.

The reigning Olympic champion, O'Callaghan was only second after a few throws. He was having trouble with the spikes on his boots. Tisdall helped O'Callaghan file his spikes down.

He said to me 'Well, I've got two throws to go and I can't get the revolutions going because the spikes are too long. I'm trying to file them down. I'm wondering can you come and give me a hand.'

Well, that was just the relief I needed. Something to do. And I was thrilled and we went down and sat over there somewhere, filing his spikes down. While the whole stadium watched (laughed) I think we were holding up the Olympic Games.

On his final throw, O'Callaghan flung the hammer 53.92, past the best throw of the leader Ville Porhola. It was O'Callaghan's second gold medal in a row.

And it continued a proud tradition of Irish throwers in the hammer, a tradition which dated back to the 'Irish Whales', the (very nationalistic) Irish emigrants who won a series of medals for the USA in the hammer at the turn of the century.

O'Callaghan had a nationalist edge to this makeup too. In Amsterdam in 1928, he became the first Irishman to win Olympic gold since the foundation of the Irish Free State six years earlier.

Like Tisdall, he was asked to compete for Britain. Albeit not in the Olympics. Days after he won gold in Amsterdam, the Brits thought it sporting to invite him to compete for the British Empire against America in a hammer throw meet on 11 August.

His answer displeased them and he created, in the words of the San Jose News reporter Alan J Gould, 'something of a sensation in the manner of his refusal'.

I have seen too many Irish boys shot down in front of their homes to be willing to represent the British. And I know too well how America has provided homes for the Irish, to compete against her.

In '32, O'Callaghan said in his post-victory TV interview that he hoped Ireland would win fice or six medals in Berlin, 'instead of just a couple'.

In fact, Ireland wouldn't compete at the 1936 Olympics in Berlin at all, not in protest at Hitler's racist rhetoric, but because of a dispute with the Brits over Northern Ireland.

Reflecting the spirit of De Valera's Ireland, the NACA laid claim to Northern Ireland. The British body asserted their claim to the North before '36 and the IAAF sided with them.

In addition to their gold medals, the two Irish boys won invites to the best parties in town. Tisdall was invited to a big bash at the house of Douglas Fairbanks and Mary Pickford, two of the most famous actors of the era.

At dinner he was placed beside Amelia Earhart, the first solo female pilot to fly across the Atlantic. O'Callaghan, meanwhile, was brought on a tour of MGM studios where he was offered the role of Tarzan.

A quirky by-product of Los Angeles hosting the Olympic Games was that successful athletes were inundated with offers from Hollywood moguls. Louis B Meyer and Sam Goldwyn treated the Los Angeles Games as one big casting couch. 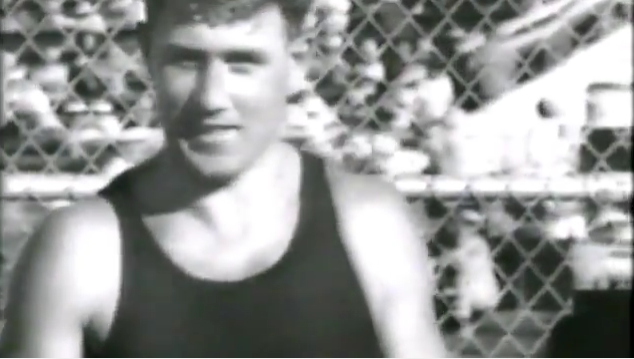 O'Callaghan declined the role which went to American swimmer Johnny Weissmuller. O'Callaghan headed back to Kanturk.

On returning home, there was a cavalcade through Dublin. The decorated duo dined with Dev at a big bash in the Gresham Hotel. The menu included items such as 'Grape Fruit Tisdall' and 'Pudding Souffle O'Callaghan'.

The two men returned to the stadium in LA for a documentary made sometime in the 1980s (perhaps around the LA games in 1984).

There's a great image of the pair walking around the stadium 50 years later. The voiceover reads:

"They were never allowed another Olympics. Sport surrendered its innocence and politics denied Ireland her place at the Games in Berlin.

"But the regrets quickly passed for down the years lingered in the memory of that afternoon in 1932 when a flag flew and a band played and the music soared out across the City of the Angels."

See Also: 'I Used To Get Up At 4am, Get Two Hours Study Done Before I Went To The Pool'