After a couple of days in which things didn't go quite a well as we would have hoped for Team Ireland, Kellie Harrington very much got the show back on the road by securing at least a bronze medal by winning her quarter-final bout in the early hours of yesterday morning.

The Dubliner was a convincing winner against Algeria's Imane Khelif, coming out victorious via unanimous decision. She will now be hoping to go one better and secure in the place in final when she faces Thailand's Sudaporn Seesondee tomorrow.

Harrington entered these games carrying a weight of expectation having been a top seed in the draw and a previous world championships gold medal. While that pressure didn't seem to affect her, she is likely to feel a weight lifted off her shoulders now that a medal has been secured.

Eric Donovan certainly believes that will be the case.

Speaking on RTÉ, he said that Harrington will now box without pressure after guaranteeing a place on the podium. However, he did warn that all four boxers remaining in the tournament are capable of winning gold.

"She has the measure of Seesondee..." - Eric Donovan believes Kellie Harrington has all the skills to deliver at the business end of the boxing tournament as she faces former foe Sudaporn Seesondee. #RTEsport pic.twitter.com/dYkuka6XAF

Kellie is 31-years old, she's a long time around.  A lot of sacrifice and a lot of dedication.

She has the measure of Seesondee, but Seesondee is different gravy. She is 28-years old, Kellie's last two opponents were 22-years old and relatively inexperienced...

This is the business end now. These last four semi-finalists are all capable of winning the gold medal, that's the truth of it. It's about performance, it's about execution.

We know Kellie has the tools, she has all the attributes, and all the skills. What she needs to do is just deliver, just perform.

She has a medal secured. I think there was a lot of pressure on Kellie to bring home a medal. I think now that she has that she can express herself more freely and just go for it.

She is a winner now, she will return from the Olympics a winner.

Any time I got to a major tournament, and I didn't pick up many medals, but when I got the bronze medal at the Europeans in 2008 it was a monkey off my back. You walk out with a bit of a swag. You're thinking 'I'm not going home empty-handed no matter what happens.

Here's hoping for another big result. 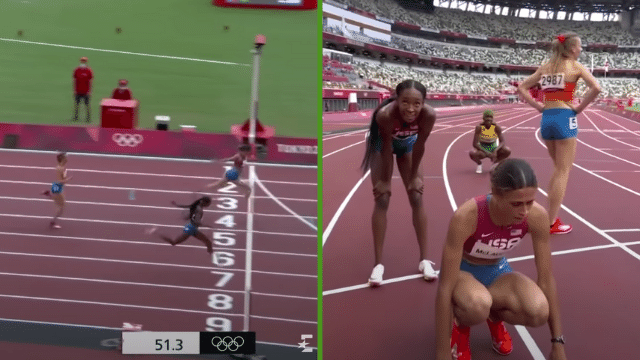 Olympics
4 weeks ago
By Michael McCarthy
After 11 Olympic Games, George Hamilton Finally Had His Irish Golden Moment
Boxing
4 months ago
By Andrew Dempsey
'Less Stress, More Success': Kellie Harrington On Staying Amateur
Boxing
5 months ago
By Eoin Harrington
Kellie Harrington: Fair City In Tokyo, Tourism In Portland Row, And Going Pro?
Popular on Balls
Rugby
2 days ago
By Colman Stanley
Keith Earls Shares Story That Captures Andy Farrell's Decency
Football
2 days ago
By PJ Browne
'If He Continues With Performances And Goals Like That, Stephen Kenny Will See It'
Football
2 days ago
By Eoin Harrington
Quiz: Name Every Player To Score In A Champions League Final
Football
21 hours ago
By Gary Connaughton
Portsmouth Likely To Retain Gavin Bazunu This Month Despite Championship Interest