This interview with the legendary George Hamilton appeared on Balls.ie in late July, after Paul O'Donovan and Fintan McCarthy had won gold in Tokyo

Like with Irish internationals, World Cups, and European Championships, the sound of the Olympics just wouldn't feel right without the accompanying voice of George Hamilton.

For many of us, he's always been there. The Belfast man made his Olympic debut all the way back in 1980 for the Moscow Games and has been there ever since, enlightening us with his supreme knowledge of the athletes and the localities, all for nothing without his perfect pitch and timing that brings the soundtrack to sporting events we watch guided first by emotion.

On Wednesday night, as the whole country shed a tear of pride (and sleep deprivation) as Paul O'Donovan and Fintan McCarthy won just Ireland's tenth gold medal of all time, the fact that George called them home felt normal and right. He set the tone perfectly throughout, and was certain enough of victory for Ireland in the last 200 metres that we could all finally exhale and enjoy those last glorious moments.

They're home and hosed. They're ahead by a length. It's Ireland from Germany, and history is made on the water in Tokyo as Fintan McCarthy and Paul O'Donovan win gold. Gold for Ireland! Gold for Ireland! Silver for Germany, and the Italians come home in third place. And that is one more chapter of magnificence from the men from County Cork. Brilliant. Sheer brilliant!

Naturally on a night that was about the fantastic athletes in the boat, it was only a couple of minutes later that people started to realise something very strange. Despite 40 years of Olympic commentaries, George Hamilton had never before called an Irish Olympic gold medal.

Then the floodgates opened. Tributes flocked in for George, with many feeling he was as deserving of the moment of glory as any.

Balls.ie spoke to the legendary commentator about why Wednesday night was just so special to him.

It's nearly a hundred years of Ireland competing in the Olympics and that was only the 10th gold medal.

And when you think how rare it is, ten gold medals in almost a hundred years. It's just one of those moments that will live forever.

And what adds to it is the personalities of the two boys involved. The backstory. The two brothers who were in the boat together, and now it's only one of the brothers. But the other fella is a twin and he had a brother who's competing as well. It's all a wonderful, wonderful story. And there's the Skibbereen angle and all that. It would make for a wonderful movie. All the elements are there. And to crown it all off with a gold medal is just fabulous.

The fact that the O'Donovan McCarthy story is so special is certainly not lost on George. Not only is it the stuff of movies, but from a man who's seen it all in over 40 years, an Irish person or team dominating a world sport on this level is next to unheard of. He didn't get to commentate when Katie Taylor came through with the world on her shoulders in 2012, but he was there on Wednesday night when an Irish crew that were odds-on favourites held their nerve all the way through and never once wavered. For Hamilton, what was happening in the boat behind told the whole story, and showed why this rowing crew are a cut above Irish contenders of the past.

Way back when, I lived in Germany. And I've followed German sport ever since. So when there's a German competitor, I like to see how they do. Now in that race, there was (Jonathan) Rommelmann and (Jason) Osborne, the two German guys, who were real contenders and ended up with a silver medal.

But it crossed my mind after the event, they had almost fulfilled the role of the Irish. They were really contenders, but not the hot favourites. They had a chance of winning gold, but they were so delighted.

The thought struck me when we had a close up of them in the boat when they'd got the silver, and they were so thrilled. So thrilled. And these were the Germans. They'd been beaten into second place, and they were absolutely thrilled with what they got, because they were beaten by the best of the world.

And it struck me that that was a complete role reversal. O'Donovan and McCarthy were the Germans in the way that went into the thing, and they won it.

But O'Donovan and McCarthy were a cut above and proved their worth. So how to you prepare for a commentary when the Irish team are odds on favourite to win? Do you have the weight of history on your own shoulders, knowing your commentary will be repeated over and over in the annals of history? For George Hamilton, those kind of notions are nonsense, and it all goes back to a brief conversation with Johan Cruyff decades ago.

If you start allowing extraneous stuff to interfere - and I think interfere is the word - you're then likely  to be distracted.

Commentary is all about focus.  You cannot possibly allow your mind to wander off what you're at, or you'll lose the thread. You have to be in the zone as if you were playing the game, because the game is dictating what you do. If you were a central midfield player, you have to react to what's going on around you in the context of that game, you don't know what's going to happen.

I once interviewed the great Johan Cruyff, the Dutch were about to play Northern Ireland. I was pretty new at the game and  I asked him a pretty stupid question, but everybody asks it, "how do you think it's going to go?", and his answer in his broken English was brilliant. He said, "The game is long. The ball is round. And before the game is not after the game." So you can apply that to everything. You have to be in the zone, and doing what it is that you're there to do, and you can't allow the other stuff to interfere with it.

The race then take cares of itself because you've devoted your attention to it and you worked it out, as to what might or might not happen. You've armed yourself with the facts that you think are relevant. You have all that stuff there in the hope that it goes and you can ride the wave so the speak.

Another great line from my past... the great rugby commentator, who's gone sadly, Bill McLaren, showed me, early in my career, his commentary sheet, and it was enormous. It was four foolscap pages stuck together, and colour coded, with all sorts of facts and figures on there. And he put it kind of nice, he said, "A lot of that is for when the goalposts fall down." In other words, it's never going to get in. "There's 95% that I won't use, but I won't know until after the game what to jump."

Forewarned is forearmed. Roy Keane: Fail to prepare, prepare to fail. You go in and prepared as you can be, and then it takes care of itself.

So while experience and preparation might outweigh pressure of history in George Hamilton's commentary, what about emotion? His commentary at the end of the race on Thursday morning undoubtedly conveyed the emotion of the watching public, but after 11 games, did finally having his own Irish golden moment tug at the heartstrings?

It is undoubtedly emotional, there's no question about that.

When you get to you're actually calling the medal ceremony and it comes to the point where the national anthem is about to be played, and you're cuing up the moment when the announcer is going to say, "Ladies and Gentlemen, please rise for national anthem of Ireland," that is an absolutely wonderful moment because at every big occasion in team sport, they play the anthem, it's just part of the protocol, but this is something that had to be earned.

Of course it's emotional. It's emotional calling them home. I think back to Fionnuala McCormack as she is now, Fionnuala Britton, winning in Budapest, and the late Jerry Kiernan saying, "I thought I heard a crack in George's voice when she crossed the line." And you try not to, but sometimes it just gets to the point where you're fighting it yourself to keep yourself on the right side of the line.

But experience is what sees you through. It is your job, and you're prepared for it. It's a bit like flying an aircraft, it's very exciting taking off and landing, but you know you're going to do it because you've done it so many times before. It's not a surprise to you. 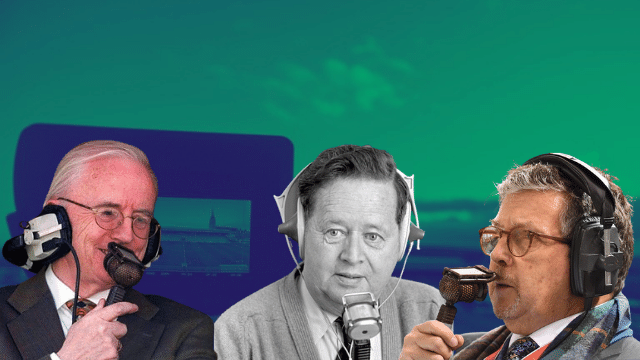