The whole nation will be behind Kellie Harrington when she steps into the ring for her Olympic final over the weekend.

The Dubliner has been in fantastic form during the games, full deserving of her place in the gold medal bout. She will face Brazilian Beatriz Ferreira at 6am on Sunday morning, with huge amounts of people around the country likely to set alarms so they can take in the event.

One person that won't be able to watch the bout will be Kellie's mother.

Yvonne Harrington may be her daughter's biggest supporter, but she can never bring herself to actually watch her fights. With her nerves so bad, she tends to sit out in the back garden of their home in Portland Row and pray while the rest of the family takes in the action.

It was no different this morning. Speaking to RTÉ, Yvonne and Christy Harrington were absolutely over the moon for their daughter.

Yvonne: The atmosphere in the house was brilliant. A neighbour knocked over a six o'clock and asked 'can I come in', I said no because my nerves were that bad!

But she came in and it was great. I was sitting out the back and listening to them saying 'oh god', but it's brilliant. I'm over the moon...

No (I couldn't watch it). I was sitting out the back praying, as usual. I'm delighted, over the moon for her...

Christy: It's magnificent. We're all so proud of her and love her so much. What she's after doing for the nation is madness.

Even the poor dog, we have to get a vet to look after him. The dog is in shock, never mind us!

Getting to this point requires so much dedication from not only an athlete, but often their family as well.

Kellie's brother Joe explained how this Olympic final has been over a decade in the making.

She is in that bracket now where she is just in dream land.

This for six or seven years ago for Kelly, she had a fight that didn't go her way and tears were shed. All the time she sat in the kitchen crying to my Da that it was for her coaches that put endless work in, for the women on the corner who there's not a lot to be happy for.

Now there is. There's a buzz around the place, the country is lifted. It's everywhere, it's Olympic fever.

Kellie didn't get here two or three weeks ago, she got here 10 or 11 years ago. It's been a lifetime's work for her and she's getting what she deserves.

Regardless of the result in the final, Kellie Harrington has certainly captured the heart of the nation. 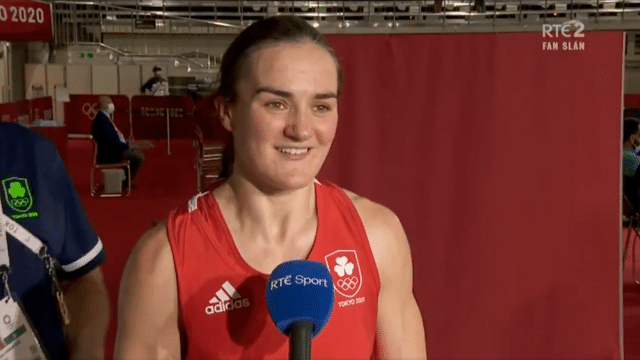