Dubliner Jack Woolley fell to a heartbreaking defeat in the first round of the men's -58kg taekwondo in Tokyo on Saturday - and his post-fight interview made for emotional viewing.

22-year-old Woolley went into the tournament with hopes of a medal, as the sixth seed. He faced Argentina's Lucas Guzman on Saturday morning and appeared set for victory after pulling ahead in the second round.

However, with mere seconds remaining, a crucial blow from Guzman tipped the scales in his favour, and he took a narrow 22-19 victory.

After the fight, Woolley spoke to RTÉ, and he was visibly emotional as he fought back tears.

'Some people have come here to participate at an Olympics, I came here to win'
A 'devastated' @jackwoolley_tkd speaks to @OFlynnPaul#tokyo2020 #olympics #rtesport
📺Watch Tokyo 2020 live - https://t.co/b2OI4OoWVJ
📱 Report - https://t.co/SgbVNe935i pic.twitter.com/SSg9eGb3P9

I'm devastated. It's tough to take and it will be, I'm after having a while there trying not to make myself upset...you know, some people have come here to participate at an Olympics, I came here to win. I could have - just don't perform like that. Devastated with the performance, everything was perfect mentally, great physically, I stepped on the mat...it wasn't my day. Sure, things happen and that's all, really.

One of the toughest aspects of Woolley's interview was how harsh he was on his own performance. The young Dubliner was mere seconds away from an Olympic quarter-final, but he was not taking any praise as he lambasted his own fight. When asked how he thought his performance had gone he said:

Not very well! I wasn't happy with my performance at all. We had this game plan and I went out and it just...my legs went to jelly, it just didn't go to plan. I'm usually a lot more aggressive, it's just something that didn't click and I'm upset with how it went. There were a few techniques that I thought worked, but obviously with certain decisions and other things like that that are out of my hands, they didn't go to plan.

I'm just trying not to cry on the telly!

At the time of the interview, Woolley still had a shot at a medal. The format of the taekwondo competition at the Olympics allows those defeated in the round of 16 to enter a repechage if their opponent ultimately reaches the final.

Nonetheless, he wasn't holding out hope. The odds of 11th seed Guzman reaching the final are slim, and Woolley recognised as much.

His hopes were dashed later in the day. Guzman went on a surprising run to the semi-finals, but he was ultimately defeated by Italian Vito Dell'Aquila by 29-10.

Jack Woolley made history in Tokyo as the first ever Irish participant in taekwondo at the Olympics. He could see the positives in that, but struggled to see past his intense disappointment.

I'm proud of myself to get here but I'm very disappointed. I feel like I let a lot of people down. But they'll always tell me I didn't, just being nice and stuff, I just wanted to say sorry to a lot of people for my performance but it's not everyday you get here, so hopefully everybody's not too disappointed.

Regardless of what he may have said in his post-fight interview, Jack Woolley has done Ireland proud at the Tokyo Olympics, and a fighter so young will surely have another crack at an Olympic medal in Paris.

Irish fans watching were emotional at the sight of Woolley's devastation, and we can only hope that the young Dubliner comes around to the national pride in his achievement.

SEE ALSO: Watch: Paul O'Donovan And His Olympic Interviews Have Made Their Glorious Return 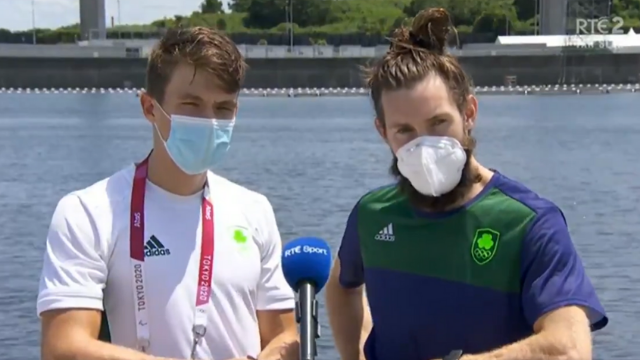 Other Sports
5 days ago
By Andrew Dempsey
The Ex-Garda Chasing A Winter Olympics Fairy Tale
Boxing
3 weeks ago
By Andrew Dempsey
'Less Stress, More Success': Kellie Harrington On Staying Amateur
Olympics
3 weeks ago
By Donny Mahoney
'I Left My Spikes Out On The Track': Devastated Michael McKillop On Paralympics Heartbreak
Popular on Balls
Golf
16 hours ago
By Donny Mahoney
'I'm Made For This': Shane Lowry Inspires Europe With Epic Putt