Katie George Dunlevy and Eve McCrystal confirmed their status as the best tandem duty in the world as they stormed home to win gold for Ireland at the Fuji International Speedway.

The Irish pair showed incredible speed and endurance throughout their women’s B time trial event as they saw off all comers to clinch a famous victory and retain the gold medal that they won in Rio in 2016. It is the pair's second medal of Tokyo 2020 Paralympic Games, adding to silver which they won in the B 3000m individual pursuit.

"It means the world to me, working for five years towards this," said Katie George Dunlevy.

"We wanted to come here and retain the title but really wanted to get the best out of ourselves and have a good ride and hope that would give us a medal and then a gold medal.

"Just for kids or adults at home with a visual impairment, our success today shows that you can do anything you want to do. There is nothing you can’t do. This might inspire them and I know it gives pride to the people at home and just uplift people after two of the pandemic."

Eve McCrystal said: "When we got silver at the World Champs, I lost that for us on technical ability. So today I was a little bit worried with the technical aspects of this course – I prefer a power pan flat course.

"Today was different over and under course. I went around with Neil the last two days and I knew what to do. I just needed to execute that. It flowed really, really well."

From Low Ebb To Senior Final: Meath Are On A Special Journey 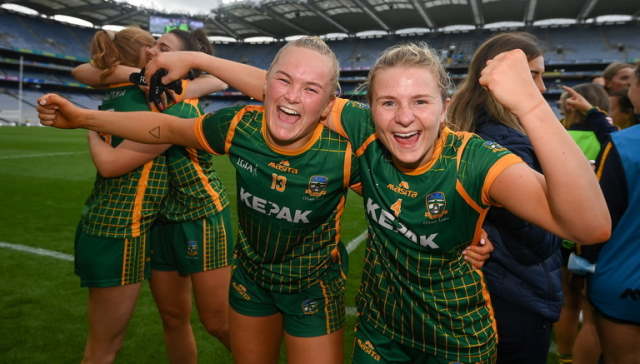 Boxing
1 week ago
By PJ Browne
'Nobody Has Stood Up And Taken These People To Task. It's A Disgrace'
Olympics
3 months ago
By John Dodge
A Short History Of Ireland At The Winter Olympics
Olympics
4 months ago
By Balls Team
The Top 20 Irish Sporting Moments Of 2021
Popular on Balls
GAA
3 days ago
By PJ Browne
Cusack Has Little Sympathy For Gearoid Hegarty After Red Card
Football
11 hours ago
By PJ Browne
Man Arrested For Headbutting Billy Sharp After Playoff Semi-Final
GAA
1 day ago
By PJ Browne
GAA President Explains Why Tailteann Cup Won't Be All-Ireland Curtain Raiser
Football
4 days ago
By Eoin Harrington
Alan Shearer Says Roy Keane "Ran Away" From Him After Famous Clash