Kellie Harrington entered the Tokyo Olympics as one of Ireland's main medal hopes, but the Dubliner has had to wait quite a while to get her campaign underway.

While the boxing competitions have been rumbling on for a number of days, she only stepped into the ring for the first time last night.

It was a comfortable bout for Harrington, defeating Italian Rececca Nicoli by unanimous decision to qualify for the quarter-final.

The 31-year old is now only one victory away from guaranteeing a bronze medal during her Olympic debut, although you suspect she will have her sights set a little bit higher than that.

One of the strongest parts of Harrington's arsenal is her mentality and that was on full display after last night's bout. Speaking to RTÉ, she summed up how she had approached keeping herself in peak mental condition ahead of stepping into the ring.

"Get the ball rolling. The first one is always the hardest..." - Number one seed Kellie Harrington is delighted to get her opening victory at the Olympics#olympics #tokyo2020 #RTESport
📺 Watch live - https://t.co/lLKXNhKPkF
📱 Updates – https://t.co/RB2R16yhlb… pic.twitter.com/rZpzxWX18n

I've been a long time out here in Japan at this stage. We left on the 30th (of June), today is the 30th and I'm just glad to get it underway.

I was a bit anxious coming in, I was the last person to box really. It's been great and the support for the rest of the team has been amazing...

There is no point is staying focused all the time, I started focusing today on the fight. I'm fit and I'm sharp, I have the coaches there and my own club coach, Noel Burke, at home as well keeping me focused.

Today is the day you need to switch on. Otherwise, you'll burn out if you start focusing too soon...

I'm just fighting for myself and fighting for my own honour. What will be will be. If I get a medal then great, but I don't I will give it everything.

As long as a I step out of the ring knowing that I've left everything in there I'll be happy...

I won't (ring home). I'll just reply to my Ma and Da, but that's it. I like to keep focused, but I believe the support at home has been fantastic.

An elite mentality for a top class performer.

Harrington's next fight will take place at 4.35am on Tuesday morning, where she will be facing Algeria’s Imane Khelif. 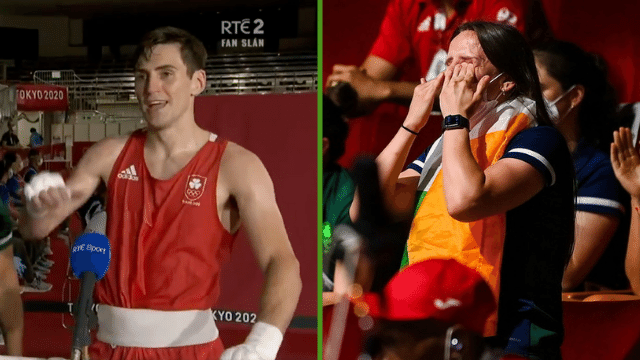