Kurt Walker won a thrilling last-16 fight against Mirazizbek Mirzakhalilov at the Olympic Games on Wednesday.

The Lisburn boxer won by split decision against the Uzbek, who was the featherweight division's number one seed. He is also the reigning world champion.

It was a sensational performance from the 26-year-old Walker. His rapid movement continuously perplexed his opponent. Four of the judges scored the fight 29-28 in Walker's favour, with the fifth giving it 30-27 to Mirzakhalilov.

"It was definitely [the fight of my life]," Walker told RTÉ.

"It just went like that. We knew we had to go out and win the first two rounds. The coaches gave me the best tactics. I'm just so delighted that I implemented it.

"It was just, be fast, hit first, and get out last. Hit and don't get it. Hit him more times than he hit me, as well.

"I did everything that they said, and it worked.

"My confidence is through the roof. There's always doubts in your head before the fight, but these boys believed in me. Even the teammates, they believed for some reason that I was going to win. I believed it so much too, and it's happened.

"I just knew I was smarter and faster than him. That's enough to win me a fight in most cases. I knew he was going to come on strong. He was very predictable, so I was able to read him and use my feints to my benefit.

"In the third round, he was swinging bombs, and I was able to move. He caught me, he's a strong lad. I just listened to my coaches, and stuck to my movement."

'My confidence is through the roof... I knew I was smarter and faster than him'@kurtwalker7 will fight for a medal after beating the number 1 ranked Mirzakhalilov#olympics #tokyo2020 #RTESport
? Watch live - https://t.co/b2OI4OoWVJ
? Updates – https://t.co/Umx3jdaCj3 pic.twitter.com/pAZI34WDnf

Had the Olympics not been postponed due to Covid-19, it's likely that Walker would not have boxed in Tokyo. Last year, he was beaten in the Olympic qualifiers in March, and his daughter Layla was then born prematurely and spent three months in hospital.

"Life throws mad things at you," he said.

"I fully believe now, and I think that belief will take me through."

Walker will fight American Duke Ragan at 3:30am Irish time on Sunday in the quarter-final. The winner will be guaranteed at least a bronze medal. 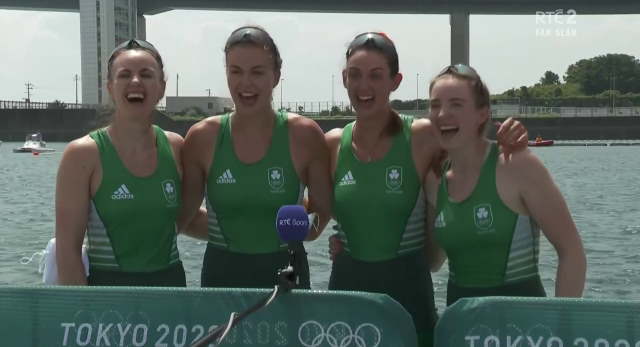 Olympics
2 weeks ago
By PJ Browne
Conlan Asks For Olympic Medal In The Post After Investigation Findings
Athletics
2 weeks ago
By PJ Browne
Paul O'Donovan Turned His Hand To Cross Country At The Weekend
Other Sports
3 weeks ago
By Andrew Dempsey
The Ex-Garda Chasing A Winter Olympics Fairy Tale
Popular on Balls
Football
1 day ago
By Donny Mahoney
'The Shamrock Is A Brilliant Signifier' - How Ireland's Incredible Centenary Crest Was Made
Football
19 hours ago
By Gary Connaughton
Gary Neville & Paul Scholes Have Differing Views On Mo Salah's Liverpool Future
Football
21 hours ago
By Gary Connaughton
Quiz: Name Every Irish Player To Feature For Liverpool In The Premier League