It was a momentous occasion for one of Ireland's finest ever Olympians, as Harrington brought home Ireland's eleventh gold medal.

She was travelling in open top bus with teammate Emmett Brennan through Dublin's inner city.

The locals of Portland Row were reacting to the homecoming on RTÉ's Drivetime radio programme being interviewed by reporter Barry Lenihan.

"Just so excited," one lady said. "The flags going out for the kids. All the gold balloons have gone out this morning."

Kellie Harrington on the open top bus as it passes her family home on Portland Row @Kelly64kg https://t.co/ynUNsUXDJw pic.twitter.com/kL7eLefIV0

Lily, the queen of Portland Row, was also beaming with pride. "You see this locality, they're fabulous people," she said.

Kids were out in their droves who no doubt felt inspired by performances from Kellie and her teammates.

"Her and Katie Taylor are about to do loads for the country," one youngster said. "I'm going to beat Anthony Joshua and Tyson Fury."

Another local heaped the praise on Harrington. "There's no airs or graces about her," he said. "Even with the gold medal that won't change her."

The emotion was high for local residents in witnessing such an incredibly heartwarming event.

"I've never seen anything like this and never will," the gentleman added. The locals were summing up the effect the gold medal will have on their area.

"No one can ever say anything about the inner city again," one man said. "We're made of champions."

"You're going to see local boxing clubs with kids coming out the doors, out the windows. She's after changing everything for this whole area."

The parties and the celebrations will no doubt continue into the wee hours of the morning on Portland Row and beyond. 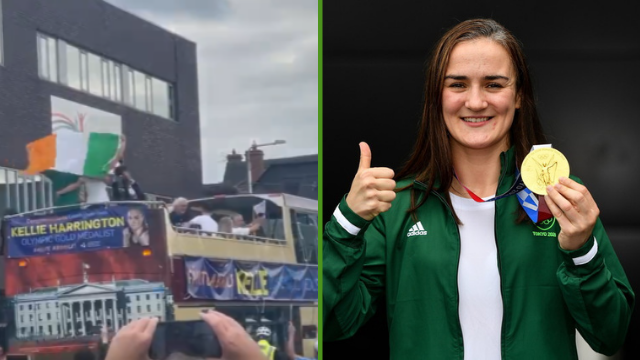