A disgraceful thing to allow to happen at the highest level of sport.

The women's modern pentathlon has been slammed for its format after a few rogue horses ruined the Olympic medal chances of a number of athletes in Tokyo.

Showjumping is the penultimate event in the discipline, with a huge number of points on offer to count towards the final standings.

A strange aspect of the sport is that athletes are not allowed to bring their own horse for the event. Instead a lottery takes place, with each horse randomly assigned to two participants in the field.

This was the cause of the issue that would unfold.

Ireland's Natalya Coyle had a real hope of a medal up to this point this morning, entering the event in fourth place in the overall standings.

However, her horse refused to jump a number of fences, just as it had done for an Uzbek competitor earlier in the round. As a result, she was all but knocked out of medal contention.

So cruel for @Natalyacoyle, whose horse Constantin refuses one fence and goes on to pick up 66 faults in total #Tokyo2020 #RTESport #modernpentathlon #RTESport
📺 Watch - https://t.co/lLKXNi2qcd

A few moments later the exact same thing happened to Germany's Annika Schleu, who had been the runaway leader in the event and looked all but certain to win a gold medal.

They were far from the only examples.

Considering how much work these athletes put in to reaching the top level, it seems absurd that a random draw such as this can completely ruin their medal hopes.

The last 30 minutes of watching @Natalyacoyle and others in the modern pentathlon has been awful.. She has given everything -
preformed brilliantly over two days and then it’s gone - nothing to do with her ability or performance - just gone. Cannot imagine how u cope with that.

This is ridiculous. Work for your whole life to have a chance of an Olympic medal then have it torn away from you through no fault of your own. How they allow this format for the modern pentathlon is beyond us. #Tokyo2020

Modern Pentathlon is absolutely cruel. Athletes put in years of hard work and dreams go up in smoke because of horses who simply won’t cooperate. Really feel for Natalya Coyle.

Train for five years, and the horse you just met couldn't give the slightest shit.

Speaking on RTÉ after the event, former modern pentathlon competitor Huge Forde said the horses should not have been allowed to have this sort of impact on the outcome.

The gold medal was thrown away. Annika Schleu had that medal wrapped up, she is a supreme athlete.

Everything she worked for is out the door because of that horse. To be quite frank, it's not good enough.

Those horses have been tested around those tracks, but that behaviour from that animal, you would expect a higher standard at this level. It's too cruel.

It applies as well to Natalya Coyle. She did absolutely nothing wrong in her round. You could see when she came in, like the British rider, immediately you could see she had him well collected and sitting well, in control and knew what she was doing.

She got a good shot into her fences, leg on, gave him everything he needed. He got spooked in the first round and the damage was done at that stage. There was a little of badness in him there as well.

To be quite frank, she didn't deserve it. It's absolutely devastating.

Arthur Lanigan-O'Keeffe, who has twice competed in the modern pentathlon in the Olympics and is also Natalya Colye's fiancé, was equally as scathing.

He said that there was no way horses of such a poor standard should have been part of the Olympic Games:

It can happen. A lot of the time at competitions there is a big variance from the top horses to the not so god horses.

At the Olympic Games it shouldn't happen. They have a big pool of horses and a long time to prepare for this year, big budgets.

You should have a more even bunch of horses than what we saw today.

I'm pretty upset about it. Natalya was obviously on the lower end of the draw today when it came to the horses.

A situation that never should have been allowed to happen. 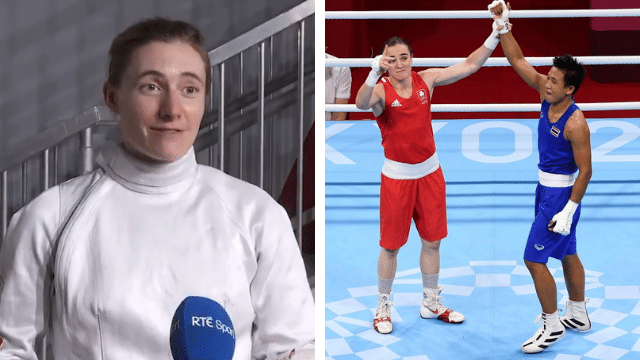