Natalya Coyle's Reaction To Kellie Harrington’s Win Was So Wholesome

It has not been a bad morning for Team Ireland at all at the Olympic Games, with Kellie Harrington’s exploits certainly helping things.

While a nation woke up with joy to the news of Harrington’s win, Natalya Coyle had to wait to find out what happened following her event in the Modern Pentathlon.

It was most certainly worth the wait for Coyle, who was more than pleased with how her Team Ireland counterpart got on this morning.

“That is class! That’s so good. God, that’s extra good,” she told RTÉ following the event. “Maybe I felt that in the piece there and that’s why there were some extra celebrations.

“That’s great and I am buzzing for her.”

Coyle was of course speaking after her event in the modern pentathlon, finding herself in third position after the fencing round of her event.

The 30-year-old Dubliner has reached the last two Olympic games in London and Rio, finishing ninth and sixth respectively.

She will be hoping to go one step further this year and secure a medal position at this year’s delayed games. Coyle will be pleased with her start, picking up 238 points from her opening round in fencing.

She will returns to action at 6.48am Irish time tomorrow morning in the 200m freestyle swimming event.

There will then be a second round of fencing, along with a show jumping and an individual laser run concluding the competition later tomorrow morning:

It was really good. I was really consistent, and I am really buzzing after that. I think I am 90% adrenaline and 10% caffeine.

We’ve a good bit of rest now which is really good, and tomorrow I get to fence again. I’m really confident in my physical condition and am looking forward to it now.”

I woke up this morning and I felt very calm the whole way through except I felt I was a bit insane sometimes, but it worked out really well.

I’m really happy with how it went. It’s great to finally get started and I enjoyed every bit of it.

You have seen some Irish athletes competing in their first games, or even second or third. But it is such an achievement to get here.

People don’t see the years in the middle and sometimes I don’t think the kudos are given to the athletes that have qualified.

That reaction, though. That was great.

SEE ALSO: Interview With Kellie Harrington's Family Will Warm The Heart Of The Nation 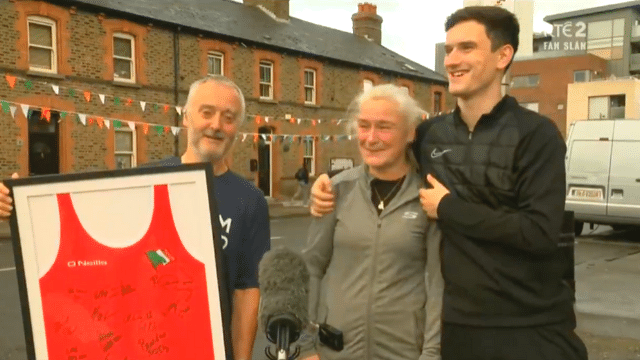