Niamh Coyne won Ireland's first medal of the Youth Olympics when she claimed silver in the 100m breaststroke.

It was heartbreak in the race for another Irish swimmer. Mona McSharry from Sligo finished an agonising 0.02 seconds outside the medals in fourth. McSharry had led the field for much of the race. 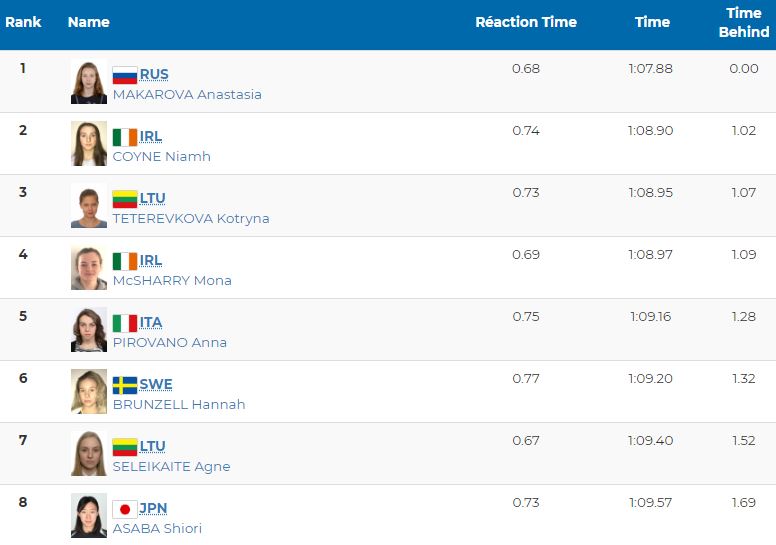 Earlier in the week, both swimmers missed out on medals in the 50m breaststroke final when McSharry finished fourth and Coyne in fifth.

"I wasn't expecting to medal out here," Coyne told RTÉ about her medal win.

"It's October, a bit of a weird time for swimmers. I was really happy with it. The first 50m I just needed to build and get my turn right. After that, I just had to go for it.

"I couldn't see anyone, even on the turn. I didn't know where I was. I was just like, 'touch the wall, touch the wall and be finished!'.

"I was shocked; shocked and happy. This is in the top one!"

The Youth Olympics, which take place every four years, are being held in Buenos Aires. A team of 16 Irish competitors is taking part in the third edition of the Games.

You can watch the 100m breaststroke final below.

Olympics
9 months ago
By PJ Browne
Mona McSharry Brims With Pride After Historic Olympic Performance
Olympics
9 months ago
By Andrew Dempsey
'She's A Superstar': Swimmers Heap Praise On Mona McSharry Ahead Of Olympic Final
Other Sports
9 months ago
By Andrew Dempsey
What Time Is Mona McSharry Swimming: How To Watch The Sligo Swimmer's Big Race
Popular on Balls
Football
19 hours ago
By Luke Delaney
Europa League Final: Five Arrests As Frankfurt Supporters Attack Rangers Fans
GAA
1 day ago
By Luke Delaney
Jackie Tyrell Calls For 'Accountability' For Players Who Feign Injury
GAA
20 hours ago
By PJ Browne
'I Had Some Troubles In My Later Teens. GAA Wasn't A Big Thing For Me'
Football
1 day ago
By Colman Stanley
Wagatha Christie Trial Sheds New Light On England's Euro 2016 Disaster