'It’s Just Sport. I Don’t Think It Should Be Put Up On Any Other Pedestal'

As a scientist and a university professor, Pat O’Leary has an analytical mind and a way with words.

He surprised himself by making the KL3 kayak final in Rio - a flatwater sprint over 200m – and finishing sixth. Now he’s doubling up and racing the equivalent distance in the inaugural VL3 Va’a event.

Va’as are outrigger canoes, with a support float on one side, and are propelled with just a single paddle.
He likens the difference between it and kayaking to “asking Sam Bennett to ride a unicycle.”

On Thursday, he has to juggle both disciplines within 90 minutes in separate qualifying rounds, something he will handle with his usual wry, unflappable demeanour.

The Cork native, who lives in Galway, had a knee replacement, due to cancer, during his Leaving Cert year. 15 years later, when a second knee replacement kept getting infected, he called it himself and asked to have it amputated.

How he has dealt with that is demonstrated by his Twitter handle of ‘@eentjebeen’, which is Dutch for ‘just one leg’.

With typical candour, he admits he was ready to paddle off into the sunset after Rio until the va’a event was introduced.

“Sixth was a stretch target for me at that point, so I was delighted and the following year I actually did better at World Championships than I’d ever done.

“As an above-the-knee amputee, I’m physically the least able of the KL3s (kayakers). If I had any other disability, I’d be a KL2. Most of the guys I’m racing with have a below-knee amputation or might have both their legs but a fused ankle.

“But in Va’a I’m actually at the most abled end of it. I’d never paddled one before and didn’t know if it would suit me but it does so I’m still here.”

He’s actually the European VL3 champion, winning the title in Poland in June by just one tenth of a second.

“I also got to the European final in the K boat. That kind of gave me an indication of where I am but, there was a lot of people missing to be fair,” he stresses.

Adding in a second event means the father of two is busier than ever. His wife Jude bought him a guitar for his 40th birthday eight years ago, but he can still only manage three chords.

Family events often go by the wayside because he’s so dedicated to training and racing but he still loves it. He paddled for 25 years before he ever got involved in para competitions and is as rational about that as everything else in life.

“It’s just sport. I don’t think it should be put up on any other pedestal. I appreciate the Paralympic movement and the fact that I’m still able to compete but, once you get past that, it’s just competitive sport. Look at the faces of the athletes as they’re competing. The worry, the anguish, the joy, it’s all exactly the same.” 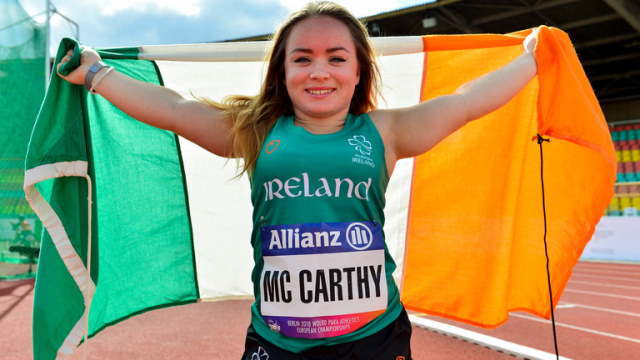 Boxing
6 days ago
By PJ Browne
'Nobody Has Stood Up And Taken These People To Task. It's A Disgrace'
27

Boxing
6 days ago
By PJ Browne
'Nobody Has Stood Up And Taken These People To Task. It's A Disgrace'
Olympics
3 months ago
By John Dodge
A Short History Of Ireland At The Winter Olympics
Olympics
4 months ago
By Balls Team
The Top 20 Irish Sporting Moments Of 2021
Popular on Balls
GAA
3 days ago
By PJ Browne
Mayo's Padraig O'Hora Using Football To Promote His Real Passion
Rugby
1 day ago
By Colman Stanley
'That Pace, That Intensity, That Organisation' All Black Legend Has High Praise For Leinster
GAA
1 day ago
By PJ Browne
Jim McGuinness's Gut Tells Him Dublin Will Win The All-Ireland
The Rewind
2 days ago
By Eoin Harrington
Watch: Brilliant Dermot Morgan Dublin Segment From 'The Travel Show' Resurfaces