His gold medal in the event means he joins Pat O'Callaghan and Paddy Barnes as the only Irish athletes to win medals in multiple Olympics.

Of course, he had a different partner in the boat on this occasion.

Paul and his brother Gary became overnight stars after their silver medals in Rio in 2016, with their post-race interviews going viral across the globe. The story of two brothers performing together on such a big stage was a compelling one, although it was made clear that the two were not partnered up solely because of their family links.

They were the two best lightweight rowers in Ireland at that time, something that would continue for the couple of years after the games in Brazil.

However, Fintan McCarthy's rise to prominence meant that he soon moved ahead of Gary O'Donovan in the pecking order.

McCarthy had originally been partnered up with his twin brother Jake, but neither pair shied away from the prospect of being broken up in order to ensure Ireland could put forward the strongest possible Irish boat in international competition.

It was myself and Gary there in Rio and then again for a couple of years after.

Then as Fintan and his brother were getting older and there were other people challenging in the trials, we were mixing it up. In the trials in 2019 Fintan came out on top.

We were trialling again this year and it was very, very close. Unfortunately Fintan's brother Jake had a back injury so that hampered his preparations an awful lot. He didn't make it then.

I think it's good for the boat that everyone is open to opening up the selection, not just having me & Gary against Fintan & Jake because we're brothers. We mix it up and try and get the best combination.

Gary O'Donovan also travelled to Tokyo as a first reserve in the event that either men was able to race, but would not compete in the games.

Paul revealed that he was unsure if his brother even saw the gold medal race as he was already on his way back to Ireland.

I think Gary might have been stuck on an aeroplane on the way home because he hasn't been used by this stage, so I don't know if he saw it or not.

He wouldn't be too put out anyway.

Top level sport is ruthless and that includes breaking up family pairings.

It's a a credit to all four men involved that they have powered on for the betterment of Ireland's medal chances. 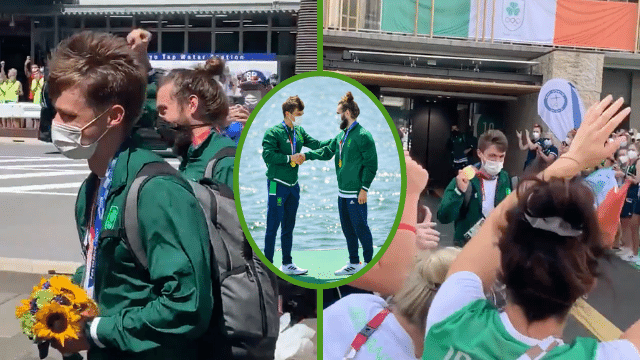 Olympics
4 months ago
By Michael McCarthy
After 11 Olympic Games, George Hamilton Finally Had His Irish Golden Moment
Boxing
8 months ago
By Andrew Dempsey
'Less Stress, More Success': Kellie Harrington On Staying Amateur
Boxing
9 months ago
By Eoin Harrington
Kellie Harrington: Fair City In Tokyo, Tourism In Portland Row, And Going Pro?
Popular on Balls
Golf
3 days ago
By Gary Connaughton
Padraig Harrington Glad He Didn't Have To 'Make A Decision' On Saudi Golf League
Rugby
1 day ago
By PJ Browne
The Last Munster Team To Win Silverware: Where Are They Now?
Football
3 days ago
By Gary Connaughton
Darron Gibson Was Often Mocked By United Teammates Over Bobby Charlton Advice
Football
1 day ago
By Gary Connaughton
Paul Merson Feels Liverpool's Season Can't Be A Success If They Don't Win The League