O'Donovan & McCarthy Were As Cool As Ever Despite Making Olympic History

What a day for rowing in this country.

Paul O'Donovan and Fintan McCarthy entered this Olympics under a huge weight of expectation. The pair had dominated the lightweight double sculls scene over the last couple of years, with many expecting them to carry that over to Tokyo.

They blew away the competition during the heats and semi-finals, although their feet remained firmly on the ground.

When it came to the final, the whole country anticipated a gold medal. They did not disappoint.

Germany and Italy came out of the blocks quickest, but the Irish pair did not put a blade wrong all race. In the end, they came out as fairly comfortable winners.

This was the first Olympic gold medal Ireland had ever won in rowing.

If you were expecting some massive outpouring of emotion from the two lads after the final race, you'll be a bit disappointed. The two Cork men remained as cool as ever.

How did Paul O'Donovan sum up the feeling of being an Olympic champion? "Ah I suppose it's fine."

O'Donovan: That was the race plan we had. We do it all the the time, like, it seems to work okay for us. We kind of know that Italy and Germany always go out hard, you can count on that.

McCarthy: I've been thinking about it all day, but I've been hugely chilled out. Normally I'd be a bit more nervous than this. I guess I just felt really prepared.

The expectation and stuff doesn't weight too heavily on us, we just do what we always do and the best we can. It worked, I suppose...

O'Donovan: Ah I suppose it's fine (to win a gold medal). We didn't really think about the medal itself, we were just there trying to be the best we can be and hopefully it'll be the best of them.

It seemed today that it was. We're pleased with that...

I've been ignoring [his mother] here all the while, so she will be fairly annoyed when I get home. I'll get the back of a hand across the face I'd say.

The two coolest men in Tokyo.

In fairness, they did seem to be a bit more emotional as the anthem was played after they received their gold medals.

The tricolour was hoisted to the strains of Amhrán na bhFiann at the Sea Forest Waterway in honour of Irish rowing gold medallists Fintan McCarthy and Paul O'Donovan. #olympics #tokyo2020 #RTESport

We can expect to hear plenty more from the two boys over the coming days.

They have certainly written their names in Irish sporting history.

SEE ALSO: Paul O'Donovan's Mam Gives Him A Run For His Money In Brilliant RTÉ Interview 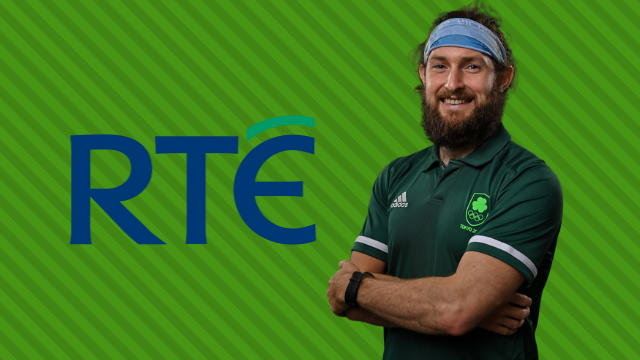