'I Was Lying In Bed And Called My Mum Straight Away, I Cried Like A Baby'

On Monday night last week, Rhys McClenaghan sat in his Stuttgart hotel bed with his laptop out waiting for the second he could call his mother. He was holding out for the moment of absolute certainty when he knew Olympic qualification was his.

That evening, the 20-year-old from Newtownards - already a Commonwealth Games and European Championships gold medallist - became the first ever Irishman to reach a World Gymnastics final.

"I cried like a baby!" says McClenaghan, remembering the conversation.

I was lying in bed I just called my mum straight away and the emotions just fell out of me because I was just thinking back to when I was eight-years-old saying 'Mum I want to go to the Olympics!'

We couldn't get a sentence out of each other, gurning to each other over the phone. It's a childhood dream coming through going to the Olympics... even weird saying that now!

Fast forward five days and there was another pioneering achievement: in the pommel horse final, he became the first Irish gymnast to win a medal at a World Championships, taking bronze behind Olympic champion Max Whitlock of Great Britain and Lee Chih-Kai of Taiwan.

McClenaghan is a real student of his sport. Saturday's final is the best he's ever seen. To be involved was thrilling. Knowing that he was up sixth, he finished his warm-up in the training hall while Cyril Tommasone and Whitlock completed their routines. He arrived out just as Whitlock was dismounting, the crowd was going nuts and the 26-year-old scored 15.500.

In between that and Lee's 15.433, McClenaghan produced one of the best performances of his life. Scores in the apparatus are comprised of two marks: one for the difficulty of the routine and one for its execution. McClenaghan's difficulty was 6.400. For his execution, judges gave him a rare 9.000.

"You would have even seen when my score didn’t beat Max’s, I was still happy," says McClenaghan, "still had that relief and joy because I can’t have an influence on the score.

"I was just so happy that the work myself and Luke (Carson, his coach) had put in, we wanted to showcase it on the world stage. Wanted to focus on the execution score and make it into the nines in execution and that is exactly what I did.

"Now, we can look at building difficulty, while maintaining that execution score.

"I even said to Luke once I jumped off the podium 'How do I keep doing this?' and his answer was 'Because you put in the numbers, you put in the work. You completely dedicated yourself to the sport'.

"And that is why I can pull it off every time." 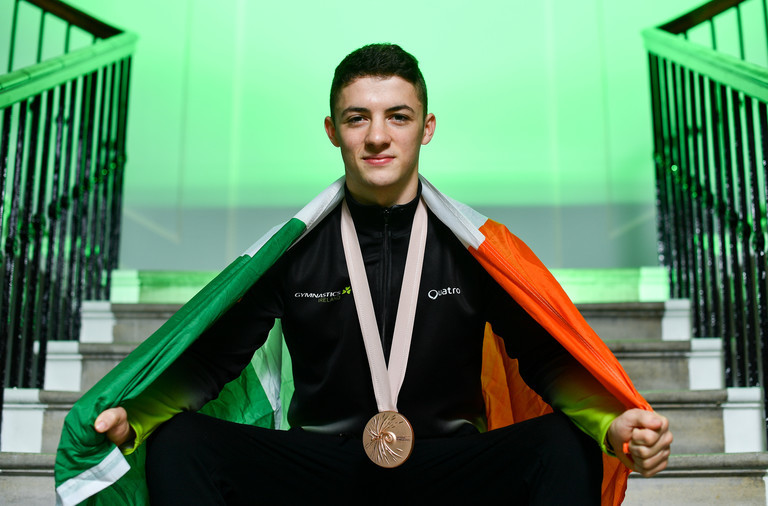 Rhys McClenaghan of Ireland poses for a portrait with his Bronze medal from the pommel-horse final at the 49th FIG Artistic Gymnastics World Championships during the Gymnastics Ireland Homecoming Press Conference at Ely Place in Dublin. Photo by Sam Barnes/Sportsfile

McClenaghan was drug-tested immediately after the final. The same happened two weeks before the World Championships and on another occasion in September.

"I just think it's so good that I'm getting drug-tested this much," he says.

I do hope it's [the same] in other countries cause it needs to be a drug-free zone when it comes to Olympic sports. Because then it's just fair. It really is. I'm not going into competitions wondering: 'Is this guy doping?'

I very much doubt that anybody in gymnastics is doping because there isn't any need for it anyway I think.

It's horrible to hear stories that are coming up, the Russian athletics team and everything. It's not nice. It's cheating.

The medal claimed and hanging around his neck, there was another treat.

"I went to the gymnasts’ banquet where we had drinks and had fun and it was very nice to talk with different athletes," he says.

"I even got to interact with Simone Biles and people who are my heroes like Krisztián Berki, the 2012 Olympic champion.

"I was actually a little bit nervous. It was the first time that I met her (Biles), it was good talking to such a legend. She is the greatest of all time, hands down.

"I just went up and said congratulations. She was with some of the other American gymnasts, they set the standards in women’s gymnastics so high and that is something I’m always going to respect them for.

"You look at some celebrities and think do they deserve all this money and all this fame and she 100 per cent deserves it. She is the greatest of all time and to see her bringing gymnastics to the public eye even more than it already is in America and worldwide, it’s very good for me, a gymnast, to see that.

"It's a very cool environment to be around people who you’ve looked up to and come along the journey with. Apart from celebrating so many thoughts were going through my head: how I can get that gold medal and how I'm so proud and grateful to get this medal and be where I am."

Olympics
5 months ago
By PJ Browne
Rhys McClenaghan Becomes First Irish Gymnast To Qualify For A World Final
Popular on Balls
The Rewind
19 hours ago
By Gary Connaughton
Report: Leo Varadkar Will Return To Medicine Practice To Help During COVID-19 Pandemic
8