American Sydney McLaughlin has smashed her own 400m hurdles world record in Tokyo, claiming gold in a remarkable race.

Entering the race, this was seen as a likely duel between the 21-year old and Dalilah Muhammad. McLaughlin was the favourite having broken the world record back in June, but her compatriot had done the same in 2019 on her way to winning World Championship gold in Doha.

On that occasion, Muhammad had pipped McLaughlin at the line by 0.07 seconds. That result would be reversed in Japan.

In a jaw dropping race, Sydney McLaughlin would come out in top in a new world record time of 51.46, shaving a sizeable margin off her previous mark of 51.90.

You can watch the race in full below.

This is the second stunning 400m hurdles race at the Olympics in as many days, with Norway's Karsten Warholm putting in one of the all-time great athletics performances in the men's event yesterday.

Speaking after she claimed gold, McLaughlin said that keeping a cool head as she trailed late on was the key to victory.

I’m absolutely delighted. What a great race. I’m just grateful to be out here celebrating that extraordinary race and representing my country;

I saw Dalilah ahead of me with one to go. I just thought ‘run your race’.

The race doesn’t really start until hurdle seven. I just wanted to go out there and give it everything I had.

I can’t really get it straight in my head yet. I’m sure I’ll process it and celebrate later.

At 21-years old, there is certainly plenty more to come from her in the coming years. 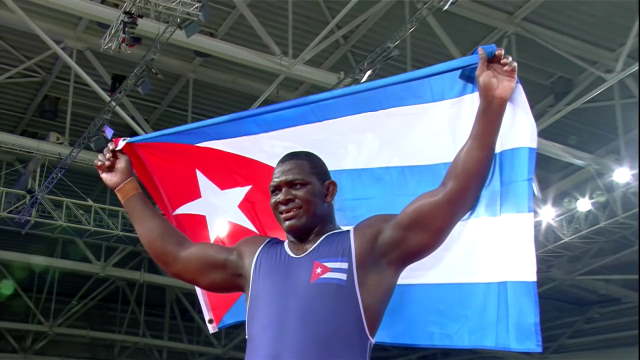 Olympics
4 weeks ago
By Michael McCarthy
After 11 Olympic Games, George Hamilton Finally Had His Irish Golden Moment
Boxing
4 months ago
By Andrew Dempsey
'Less Stress, More Success': Kellie Harrington On Staying Amateur
Boxing
5 months ago
By Eoin Harrington
Kellie Harrington: Fair City In Tokyo, Tourism In Portland Row, And Going Pro?
Popular on Balls
Rugby
2 days ago
By Colman Stanley
Keith Earls Shares Story That Captures Andy Farrell's Decency
Football
1 day ago
By PJ Browne
'If He Continues With Performances And Goals Like That, Stephen Kenny Will See It'
Football
2 days ago
By Eoin Harrington
Quiz: Name Every Player To Score In A Champions League Final
Football
19 hours ago
By Gary Connaughton
Portsmouth Likely To Retain Gavin Bazunu This Month Despite Championship Interest