We're Off The Mark! The O'Donovan Brothers Claim Silver For Ireland With Sensational Finish

They pulled like dogs and got us over the line in second place.

Gary and Paul O'Donovan - take a bloody bow. The Skibbereen brothers who have captured the hearts of nation in Rio with sensational post-race interviews once more proved themselves world class athletes as they seized silver for their country in the Men's lightweight double sculls.

Notoriously slow starters - 'they are to Olympic starts what Liam Brady was to the right foot' rang the commentary - the lads found themselves in fifth place early on before battling into second near the halfway mark.

The O'Donovans, trained by respected Dominic Casey since they were kids, powered towards the finish and, while fending off Norway themselves, threatened eventual winners France down the home strait. The French looked over their shoulders towards the Irish in Lane 1 on more than one occasion, and a pulsating finish culminated in a split-second France - Ireland - Norway crossing of the line. 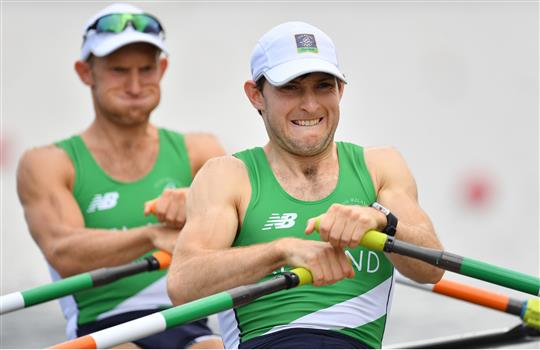 Olympics
2 months ago
By Gary Connaughton
Paul O'Donovan Explains How Breaking Up Two Family Pairings Helped Ireland To Olympic Gold
Olympics
2 months ago
By John Dodge
The Rise And Rise Of The Powerhouse Irish Lightweight Double Sculls
Olympics
1 year ago
By PJ Browne
'We Were In The South Of Spain, We Came Home Fairly Lively And Quarantined'
Previous Next