At 6am this morning, the nation shrugged off a bad night's sleep to roll out of bed and watch Irish sporting history be made. There was the tiniest of tremors as we collectively jumped from our feet the moment Kellie Harrington's hand was raised and she became Ireland's second gold medalist of these Olympics.

RTÉ were kind enough to share that moment with the world. It's a little bit raw, a little bit goofy and 100% full of Irish sporting pride.

It was featured Kenneth Egan leaving Eric O'Donovan hanging on for a high-five for what feels like an eternity, as well as Egan's hilarious victory clap.

RTÉ's coverage of the fight - and of all the Olympics it must be said - has been brilliant.

O'Donovan and Egan said their nerves were 'shredded'. when the coverage returned to studio. O'Donovan hailed Harrington for sticking to her plan after losing the first round.

'What a display!'@ericdonovanbox was blown away by that gold medal display from @Kelly64kg #olympics #tokyo2020 #RTESport #boxing

"Finally she found her measure. She found her distance, and the target she found at will. Absolutely fantastic. Counterpunching. Sharpshooting. She hit her with shots, tied her up."

"We said it before during the week. She had some tough fights. Her semifinal was tough. But to perform on the biggest stage as well as she did, that deserves an Olympic gold medal. And it's just fantastic for her,"  Egan said.

O'Donovan explained how the origins of Harrington's success came in 2016, when Harrington switched weight classes to fight at lightweight after Katie Taylor went professional.

The moment when @kelly64kg 'flicked the switch' and began this journey to gold was in 2016, says @ericdonovanbox #olympics #tokyo2020 #RTESport #boxing

"Something clicked in Kellie Harrington around 2016 when she fought in the light welterweight division, which is lets face it is eight pound heavier."

Egan impressed many with his fine attire, which had a bang of a wedding suit.

People are usually only this well dressed at 6am because they're still up after a wedding. pic.twitter.com/PqRFZa5VSS 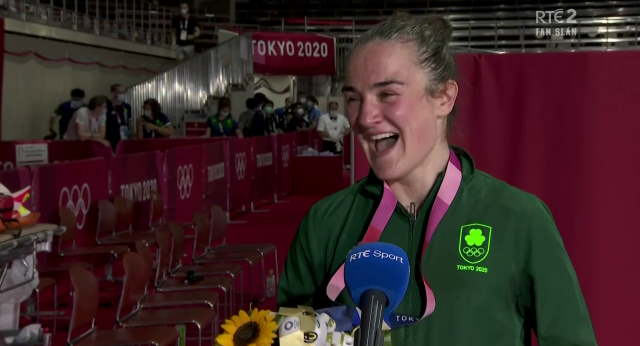